At the cusp of Denton County farmland, a giant, dome-shaped house is stacked to the brim with mysterious artifacts. Its yard is populated by cats, dogs, and eyeless horses. Jessica Luther Rummel is the curator and caretaker of this odd collection of the abandoned. Former co-founder of the Dallas-based Phoenix Project Collective, a service-based organization that aimed to provide an inclusive community venue, Jessica is a long-time advocate for artists and those in need.

Currently a McNair scholar at the University of North Texas studying Religious Studies and Ancient History, Rummel’s recent trip to India, where she lived among Jain scholars, built upon her belief in the importance of service. Her latest endeavor serves local music lovers and musicians alike. Jessica and her husband, Dave Rummel, are the co-founders of Denton-based alternative label, Triptych Records.

Triptych Records is a bold collection of DFW artists whose musical expertise range from dark psychedelia to electronic punk. Many of the sounds coming out of Triptych echo the electronic post-punk movement of the late ‘70s. Each band describes their style a bit differently, but all would agree that psychedelia is the preferred genre.

Of the three bands on the label, Strays has the most anti-capitalistic backbone. This can be felt in lyrics like, “the path is deep,” found in the song “Eldress,” which gives reverence to “Mother Nature” and the complexities of life. They have a deep, reverberating sound which guitarist Ben Copeland describes as “stoned psychedelic doom”.

Copeland is the band’s lead guitarist and lyricist, Spencer Jones plays bass and theremin, and Ben Scott plays drums. Early last year, they partnered with Triptych Records to release their debut full length album, Time | Death | Void | Dream, which bred a psychological thriller of a music video for the single, “Inverter.” Scott says it speaks to the band’s constant questioning of the dualistic nature of life and death.

Each of Strays’ musical enterprises follows a narrative-like effort. This theme follows them throughout Time | Death | Void | Dream, which is based on Cormack McCarthy’s Blood Meridian. Copeland was drawn to the novel for many reasons: “Blood Meridian was chosen for its composition. McCarthy’s visceral and cinematic style make the process of translating elements and events from the page to a form of sonic representation is hugely rewarding…It’s just an excellent book, and happened to resonate deeply with each member of the band.”

Starting on the speakers with a guttural scream (try the song “Sci-Fi-Hi”), Sunbuzzed is another band on the Triptych roster that isn’t afraid to tackle important issues. Lo Ramirez is the lead singer, Cari Elizondo is the lead guitarist, Daniel Serrano is the keyboard expert, and Ellie Alonzo is on drums.

Sunbuzzed originally planned to release its sophomore album, La Ofrenda, on April 4, just in time for a string of spring concerts. By the time April hit, the group decided on a slow rollout, teasing just two songs on Apple Music and Triptych Records. The full album is available on vinyl through the label’s online store, and the purchase includes a digital copy. The band will release the entire album on streaming platforms when new concert dates are secured, Rummel says.

Spanish for “The Offering,” Daniel’s kind demeanor led to the concept of the record.

“This album is our way of offering a collective creative energy and a more cohesive thought, style-wise. It’s a labor of love for us,” he says. Each band member has a close bond with the other; some of these bonds go all the way back to high school band practice, where the idea of creating something to celebrate their Latino backgrounds through a distinct psychedelic sound was first born. 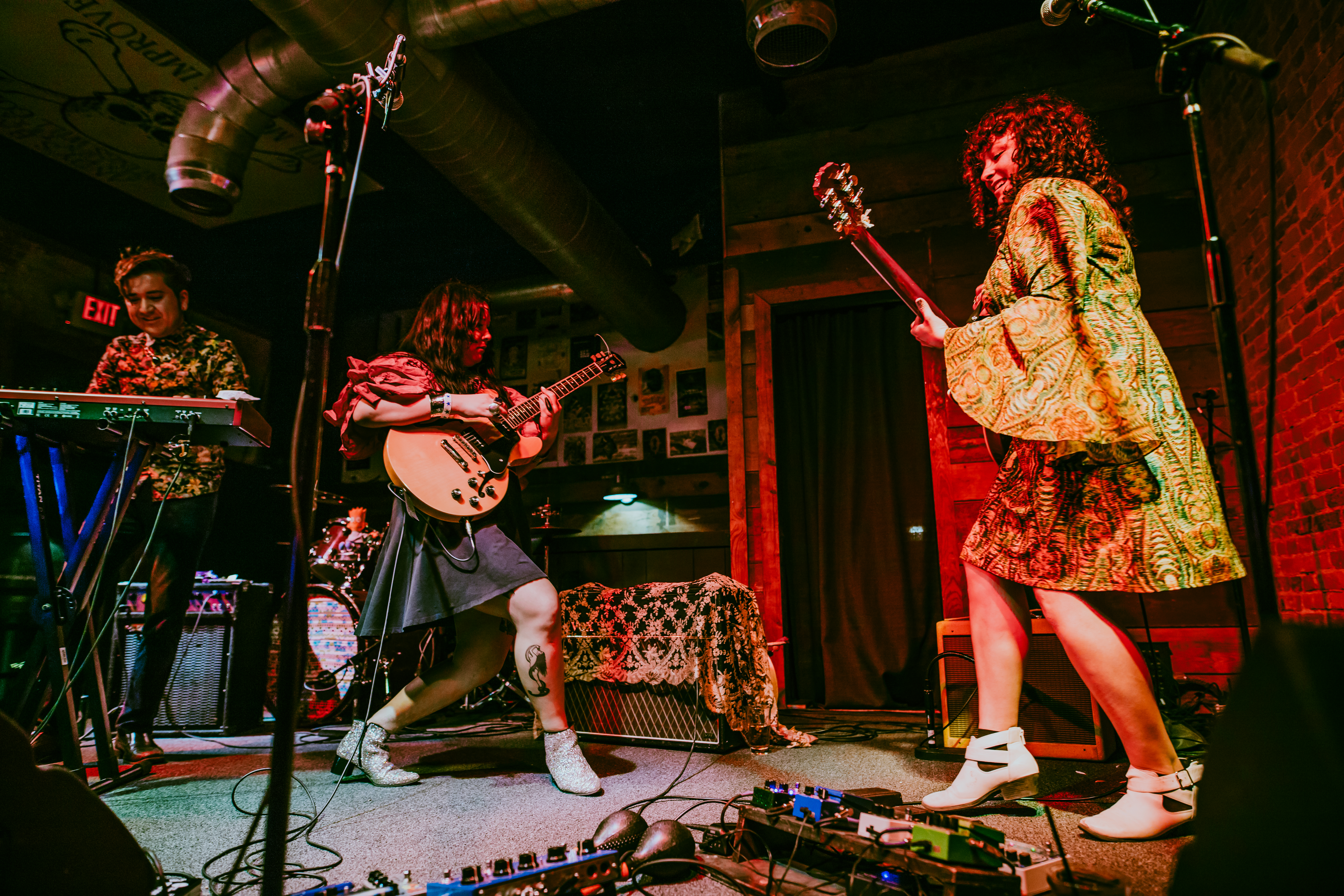 Some of the musicians hail from the Mexican-American border, and their experiences from that area often come through their music. For the members of Sunbuzzed, the psychedelic genre offers freedom of expression to speak on the current political state, says Elizondo. This will be her first time feeling comfortable enough to sing in Spanish on “La Ofrenda,” because it’s only natural. “Every day we go to our jobs and clock in, clock out, and what makes it all bearable to do the day-to-day is meeting up each evening to rehearse and play. Pursue whatever brings you joy and happiness, it’s just natural.”

Felt & Fur is the only Triptych Records band that could be classified as synth pop. The group’s sophomore album, Held, made its debut on Triptych in November of 2018 and received both commercial and critical success. Jarrod Estes provides the sketches or outlines of the songs, Randall Minick is great at texturizing, and Alizsha Pennington provides the lyrics and guitar riffs. The band describes itself as dark electronic and plans to release new music by the end of the year.

For Alizsha, writing songs for the band is the ultimate form of expression.

“It’s an abstract way to describe a situation or emotion. It’s very therapeutic for me and I often use music to work through problems. It also helps me to understand myself a bit better,” says Pennington. “I’ll receive messages from people relating to my lyrics in a way that is very different, but personal. It’s just me sharing my own experiences, but hearing the way other people connect to that is great.”

Randall and Jarrod say Triptych was the perfect arena for their collaborative mode of creating music. “We didn’t want too many rules. Jessica’s input is valuable to us, and her presence is nurturing, but it’s clear that she values the creative freedom that we require.”

Where will Jessica Rummel be at the end of the year? Most likely pursuing a Ph D. in Philosophy and continuing to support the alternative arts in the DFW area. The Rummels will be back supporting Triptych releases in local record stores and slinging Triptych band merch at shows across North Texas after the current lockdown ends.

Until then, you can explore the label and its unique trio of psychedelic bands virtually. The pair also just launched Triptych DIY Distro, a new platform which promotes music by independent artists.

Dave Rummel described the project in a press release: “Our goal is to continue working with and supporting the bands currently on our small roster while extending our resources to other Texas artists as we can to help alleviate financial hardships for local musicians as much as possible.”

Listening is one easy but important way to help. Check out the artists of Triptych Records here. You can hear the new release from Sunbuzzed on Triptych and Apple Music.