In the lower level of the Crow Museum of Asian Art, beneath galleries of carved jade and precious lacquerware, Chinese-born, Austin-based artist Beili Liu has brought out the strength in a more delicate material: Thousands of yards of red thread coiled into a network of discs. This composes her site-specific installation Lure, a play on the Chinese legend of The Red Thread, which says that all children are born with an invisible tie to their soulmates.

Lure/Dallas is one of two site-specific installations in Beili Liu: One and Another, the inaugural exhibition of the Crow Museum’s three-year Texas Asian Women Artists Series. For Liu’s first major exhibition in Dallas, the artist, UT Austin professor, and mother draws upon her Chinese heritage, and, more broadly, her experience as an immigrant woman.

Part of an ongoing series, Lure/Dallas does what its name implies, drawing the viewer in with a narrative that welcomes interpretation. Liu says the discs represent individuals, but she’s heard them compared to poppies and blood cells. Some discs are paired, shaped from a single thread, a few are alone in masses; the connections droop to the floor, tangling, sometimes becoming obscured, sometimes drawing pairs closer.

You’ll be thinking about these common threads as you move upstairs to the Mezzanine to see Liu’s second installation, Each and Every/Dallas, also part of an ongoing series. Here, the artist lays out a more pointed discussion of humanity. The room is filled with flattened pieces of children’s clothing, dipped in colorless cement and arranged in a rectangle hovering above the floor. Cement-coated threads hang from the ceiling like dull needles, stopping inches above the garments. 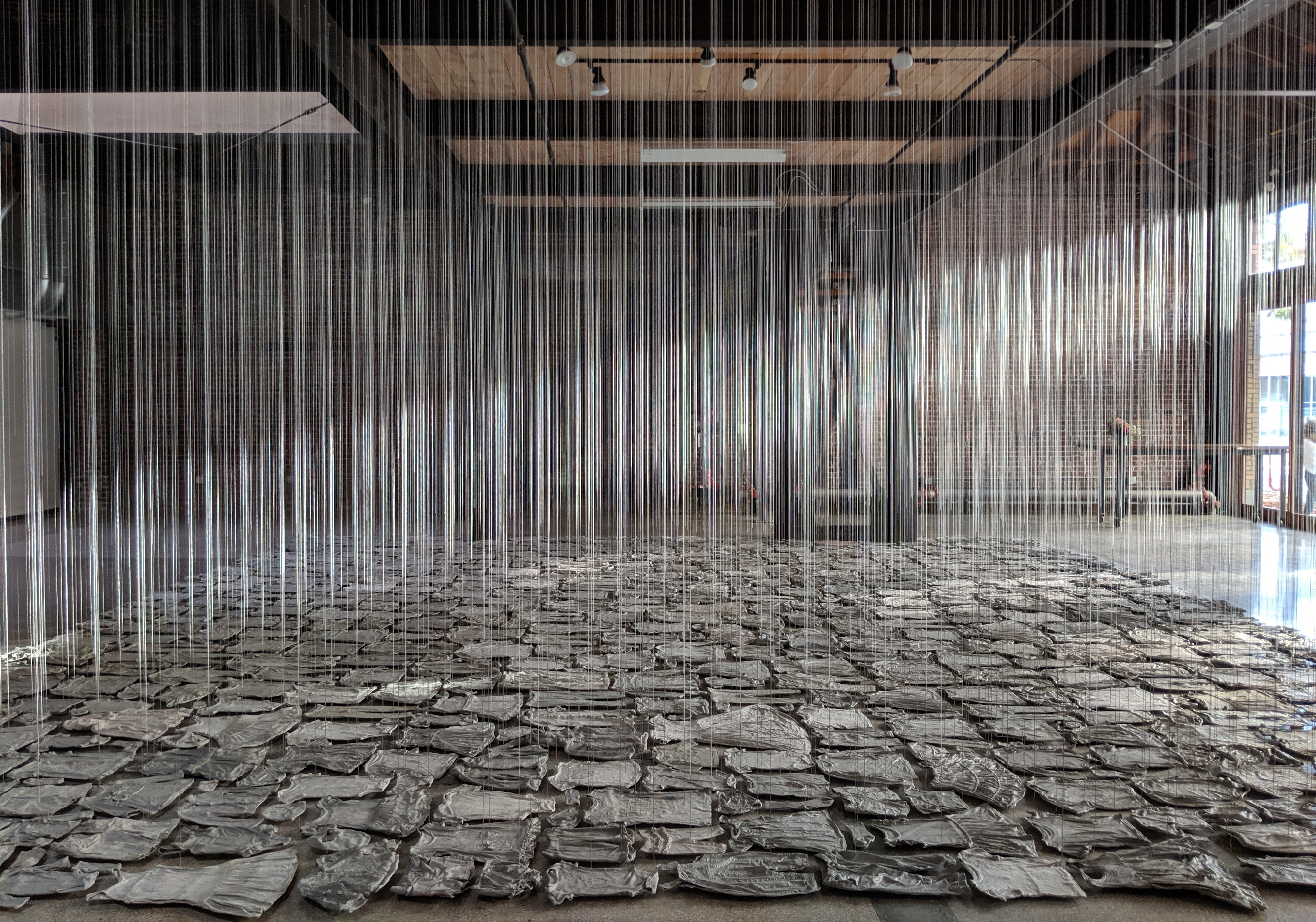 Liu’s “Each and Every” series. David Wulzen.

It’s a deeply personal project for Liu, one that started with collecting her young daughter’s hand-me-downs without a specific purpose in mind. When the Trump administration’s zero tolerance immigration policy was introduced, she decided to use those pieces, in addition to clothing donated at her daughter’s school and by fellow artist-parents, to speak out.

“I thought the combination of cement, which is an industrial building material, and these tender, soft, small pieces of clothing that are to shelter our little babies’ bodies, is such a poignant and powerful combination. We have the harsh and the tender put together to talk about this situation that is really difficult to describe–the impossibility of why this even happened,” says Liu. “I see them as being both preserved and destroyed at the same time, so they can no longer serve the purpose of protecting the bodies of the children. The scale is important, because we are talking about a large number of children who are still away from their families, who don’t know where they are in the system. There’s this unknown sense of loss and suffering being visible…It’s a project that I really needed to do as a mom, as an immigrant, and also as a woman artist.”

The artist has also planned a performance in conjunction with the installation; She will return in March and sit in the back of the gallery, mending worn pieces of children’s clothing in an act of silent protest and meditation (dates and times TBA).

Liu carries this idea into her final piece at the Crow Museum, a flag commissioned by MAP (Make Art with Purpose), which is separate from, but directly related to, her exhibition. The work, titled “Outline,” is made from a cyanotype image of clothing seams. It hangs in the skyway of the Crow Museum, looking over Flora Street on one side and the Trammell Crow Center on the other, a tribute to the mothers who are still awaiting the return of their children.

Beili Liu: One and Another is on view at the Crow Museum of Asian Art through August 16, 2020. The museum is free and open to the public.

Finding the Perfect Fitted Suit in Dallas, Made Easy