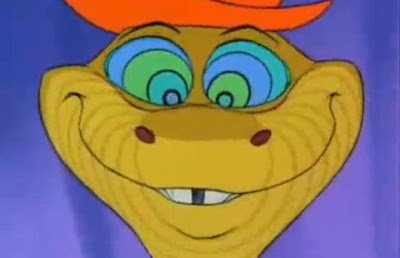 [Warning: HGH levels of snarkiness learned at the feet of such contemporary cranks as James Howard Kunstler and David Simon, or as I like to call them, fire-fingered, truth-telling, flamethrowers.]

So it has been a long time coming, but the design for the proposed Museum of Nature and Science have been unveiled by Morphosis ie Thom Mayne aka Pritzker Prize winning architect (you thought Dallas would hire anything but? We want WORLD CLASS!!!!111!!!) And…they are predictable, if I may somehow be the most flattering AND insulting as I possibly can at the same time.

And away we go, a merry and fawning people, kissing pigs and contracting a swine flu of the mind.

The press release is absolutely hilarious. I copy and paste cuz I can:

Invoking Roman ruins, he said the aim was to demonstrate “Nature taking over building” and that the hope was to include plants and living material in the exterior finish. Talley Associate’s landscape design already incorporates a grove of trees, native Texas plantings, and, as Mayne described it, “a savannah” on the north side of the building.

…so lemme translate. In this dreamt post-apocalyptic world when all of our silly messiness of humanity is extricated from their beautiful works of art can this place exist as it is meant. They’re so ahead of our time. By the way, a “savannah” has nothing to do with local Dallas ecology. Why don’t we just make it a cotton field and get it over with.

In the world of nihilists, the world will be better when we’re gone and American society is the equivalent of Rome during Nero or Caligula, a morally and culturally bankrupt empire, at the onset of a new Dark Age. While there may be some truth there, I personally refuse to participate in the fiddling. It’s easy to ride the freefall side of the rollercoaster.

The design is conscious of its proximity to downtown, with a transparent atrium on the corner of the building providing dramatic views of the skyline. The semi-exposed elevator shaft on the outside of the building encourages visitors to ascend vertically and then work their way back down through the Museum. (Shades of the Guggenheim, maybe?)

It is very conscious of being near downtown. Perhaps too self-aware, like a Highland Park tourist periodically stopping by the Neiman Marcus flagship. There are views, the building can see downtown, but not be a part of, and is distinctly seperate. As in at least an arm’s length away at all times from that messiness that is true urbanity.

But, maybe we don’t want that in Dallas. Perhaps we don’t want places where we actually can all come together and coexist. We want divergent socio-economic classes and 21st century apartheid. If so, we better be aware of the repercussions and prepared to pay for the taxes to support the physical disconnects and the policing to preserve such divisions. We want to be able to talk about our great city but not mean it. We want to live in our McMansion, but we don’t want the hour commute, the surly neighbors, or the fat, stupid kids that we ignorantly weren’t aware came as a side helping.

Simply put, we pretend we are addressing problems, throwing money at them, but not really be honest with ourselves about the underlying issues. Sounds like the hubristic lexicon of starchitecture-ese, no?

Drilling out the cavities so to speak. I can donate the money, if it’s enough maybe get my name on a brick or something, drive into the city, park in the garage, see a show, and never step foot outside. Aint it great? Now step on it before these city folk spread their diseases, like diversity and tolerance!

And good grief…the Guggenheim? Really? You know what the Guggenheim has? It has New York City around it, providing the life, the vitality, the interaction, and the backdrop for something different to stand out and be outstanding. Without city fabric, something merely stands. And furthermore, the City (and the people) were there first and the City then arose to the point culturally demanding such facilities; the horse appropriately ahead of the cart.

There is still work to be done. (The Museum estimates that it needs to raise another $60 million or so.) But it is clear that we have another dramatic work of architecture on our horizon.

Sidenote: why does every museum have to be so literally representative of the displays inside these days anyway? Yet, remarkably they all manage to look the same yet with each particular architect’s not-so-subtle accoutrements.

As for it being “another dramatic piece of architecture,” any singular piece of architecture aka object is not and can never be dramatic. It is by definition static, a postcard. The life of a place, the genius loci, alchemically induced by the city fabric is dramatic when appropriately orchestrated to allow the “city” aka the residents to instill their own lives into the place. Places live when they adapt over time. Or we can falsely imply the passage of time and the fate of civilization 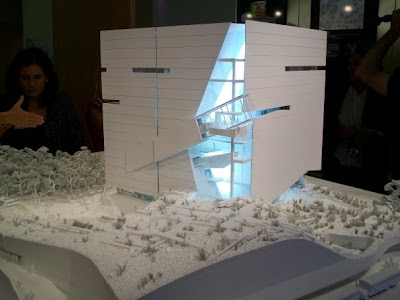 The spaceship has landed…on a moonscape apparently

The site is at a critical key nexus where West End portion of Downtown, Victory, and LoMac version of McKinney/Uptown converge yet are each isolated by a bizarre vortex of vacant properties, tangled spaghetti of inhumane roads, highways, and off-ramps, and buildings that (potentially rightly so) want nothing to do with the pedestrian UN-friendly streets on which they sit. Cities are formed by complexity. It is what makes them great; makes them hum. They are about connecting disparate things to allow for said complexity.

The fundamental failings of modernism conceptually is that it was a movement based on minimizing complexity, which had its purpose when disease and pollution wreaked havoc in 19th and early 20th cities. That mentality has since pervaded in all aspects of life. When writ large, we get two-dimensional zoning or when transposed upon singular buildings it minimizes complexity and becomes simple: an object to be unmolested by its context or surroundings and contribute back to the street scene in equal proportion.

Singular buildings are anti-urban, disconnected, not part of this culture, like any person left behind by contemporary post-modern society, their only impulse is to act out against that system that has alienated them. And act out these buildings do.

There is an appropriate place for standing out as any Guggenheim does, but it does so by being plugged into its context. Furthermore, do things really stand out when they all look the same? As part of a fleeting fashion movement? Fashion is inherently ephemeral. Contrasted, cities are timeless. Similarly, these buildings quickly go out of style and soon look aged like a members only jacket:

Any fashion is ultimately devoid of anything meaningful but merely its difference from the previous. “Pea green is in style this season? Oh, I just bought a pair of sea green underoos. I better toss them out and get some new ones.”

That is the 20th century economy as expressed through sun belt cities and our prevailing attitudes to all that is around us is it not? Toss it out and get another. So we cast aside Fair Park in favor of Victory, this decade’s flavor of the month. 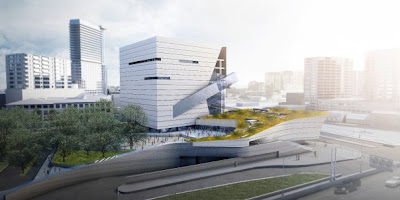 The above image says it all: a view of a loading dock. Presumably however, we’re supposed to notice the super clever faux geologic layers of local Dallas topography. What I see is a barrier. Another wall meant to divide, not bring people together and “the prairie” to give ample distance for which to admire another borg cube.

Post-modern nihilists either don’t believe in revitalizing your city or are too fundamentalistically tied to their singular design style let alone creating a framework for residents to give life to their own city – which is the only way city’s revitalize is when the residents take ownership (and responsibility) for their city. But this isn’t for you, silly rabbit. These are monuments to their own other worldly cleverness as they watch Rome burn…and they are laughing at you, at us, the City of Dallas, everytime they make another raccoon trap.

…and quite frankly, Dallas is my adopted home and I’m quite sick of being laughed at, and I don’t blame the architects. I blame the siting. I blame the lack of a coherent masterplan. I blame Victory and that gawdawful uhhh, garden apartment complex called the Jefferson. Ultimately, it’s our responsibility locally to have a unified vision for a real city.