SculptHouse is a Unique Addition to Dallas’ Ever-Growing Fitness Scene

At this stage in the evolution of boutique fitness, everything is a bit of a copy. A new spin studio is typically some sort of mashup of SoulCycle, or Flywheel, or both. All HIIT classes tend to take a cue from Barry’s Bootcamp. And even Rise Nation, one of the newest and weirdest workouts in the country, isn’t the only studio of its kind in Dallas.

Atlanta-based SculptHouse, which opened in Inwood Village in May, isn’t wholly original. It also takes a cue from Barry’s Bootcamp, and utilizes the well-established Lagree Fitness Method. But it is the first studio to combine two very nice pieces of equipment (the typically $10,000 Megaformer and Woodway’s Curve treadmills), creating a balanced, 50-minute workout that, despite relying on familiar fitness elements, feels like something entirely new. 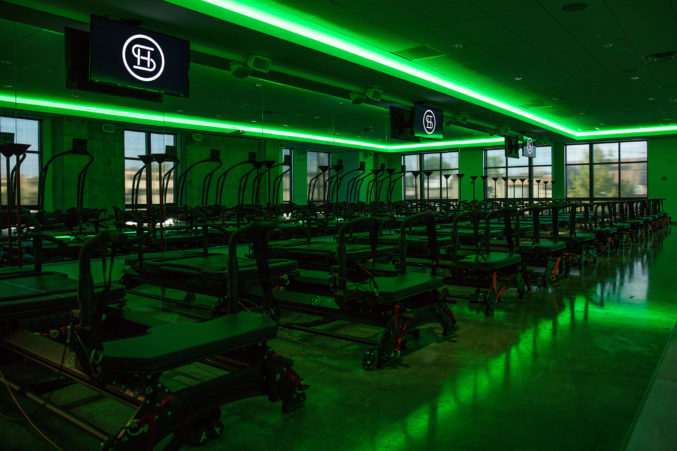 It’s also incredibly challenging. In a signature SculptHouse class, you’ll spend half the 50-minute session sporting sticky socks and doing Lagree on a Megaformer (which might look like a bigger, crazier Pilates reformer, but creates a burn like nothing else—One Lagree devotees will understand).

The other half is spent in sneakers on the self-powered Woodway Curve treadmills (they’re like fancy hamster wheels), where you—fairly independently—move through cardio intervals.  (Understandably, more attention needs to be paid to the ones doing planks on a large, moving machine.) It’s a little jarring after years of HIIT classes where the cardio cues come directly from an instructor, but it’s also sort of freeing. A wall of screens prompts you to run (or walk) at four different speeds, which you get to set for yourself. I’m not sure if those Woodways Curves are harder than a typical treadmill, but it certainly feels that way.

Whether you start or end on the treadmill is up to you when you book a spot in the fairly intimate classes (personally, I prefer to get the Lagree stuff out of the way first), but regardless, it’s the most time-efficient local way to get in both your cardio and strength training.

SculptHouse is the culmination of founder Katherine Mason’s past fitness experiences. After college, The University of Georgia grad put in her time in Manhattan, working behind the front desk at Barry’s Bootcamp, as a personal trainer at Megaformer studio SLT, and as a model for New York-based Bandier (whose first non-East Coast outpost opened in Highland Park Village in 2015).

Currently, the studios (which also house activewear boutiques filled with high-end lines such as Ultracor, Alala, and P.E Nation) can only be found in the south (Atlanta, Nashville, and now Dallas), though Mason does hope to eventually bring the concept to the coasts. “People where I’m from are just as fashionable and fitness-oriented as people in New York,” says Mason of her initial vision. “I wanted to be the person that brings this to them.”

With vaccines readily available, ClassPass reports that Dallas got back in the gym in 2021.
By Catherine Wendlandt
Fitness

After a year of livestream workouts, Dallas ClassPass users are eager to return to their favorite studios. Of the 15 most-booked experiences in our region, none are virtual.
By Emily Heft
Fitness

Spoiler: A lot of you were streaming. Fun fact: out of all major U.S. cities, Dallasites are the most likely to book a class at lunchtime.
By Emily Heft
D Magazine Directories