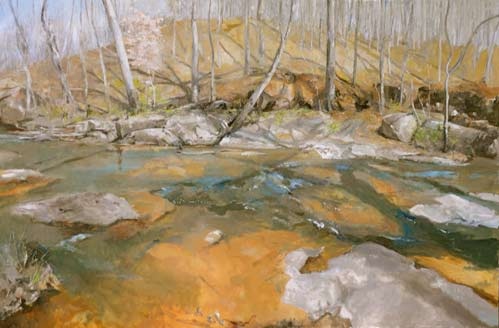 Laura and I checked out the White Rock Home Tour on Sunday benefiting Hexter Elementary School.  The houses were pretty spread out, so how could Hexter include all of them?  Just a question. The only new one was an Alan Hoffman on Groveland – cool neighborhood, I felt like I was in East Texas.  The other homes were mid 50s Ju-Nel homes – compact and beautifully effecient.  I was struck by the artwork on Woodgrove – all done by the owner of the house, James Colley. I was also struck by the master closet only containing men’s clothes.  So, I asked.  The owner, as it turned out, and he just said “The woman’s clothes have been relocated.  To another house – they used to fill the whole space.”  So, I put my foot in my mouth once again.  Just when I was going to try to get a deal on a painting.