On October 15, 2014, I cut gluten out of my diet. Once I spilled my guts and revealed a medical condition that is irritated by wheat, my inbox flooded with emails. I’d spent the last 18 years writing dining reviews, but the enormous feedback on my decision to leave gluten, and my post as a critic, exceeded anything I’d ever published.

Once I sewed the scarlet GF on my sweater, I was branded “one of those” by skeptics. I understood. I was a cynic once. Going gluten-free certainly throws a wet towel over your social life. That is if your social life revolves around eating in restaurants.

The good news for those who search restaurants for gluten-free meals is that chefs and restaurateurs behind “regular” restaurants are adding more options to their menus. Now it is easier to tag along with friends to a place of their choice, instead of either eating before you go or dragging them to a gluten-friendly restaurant. 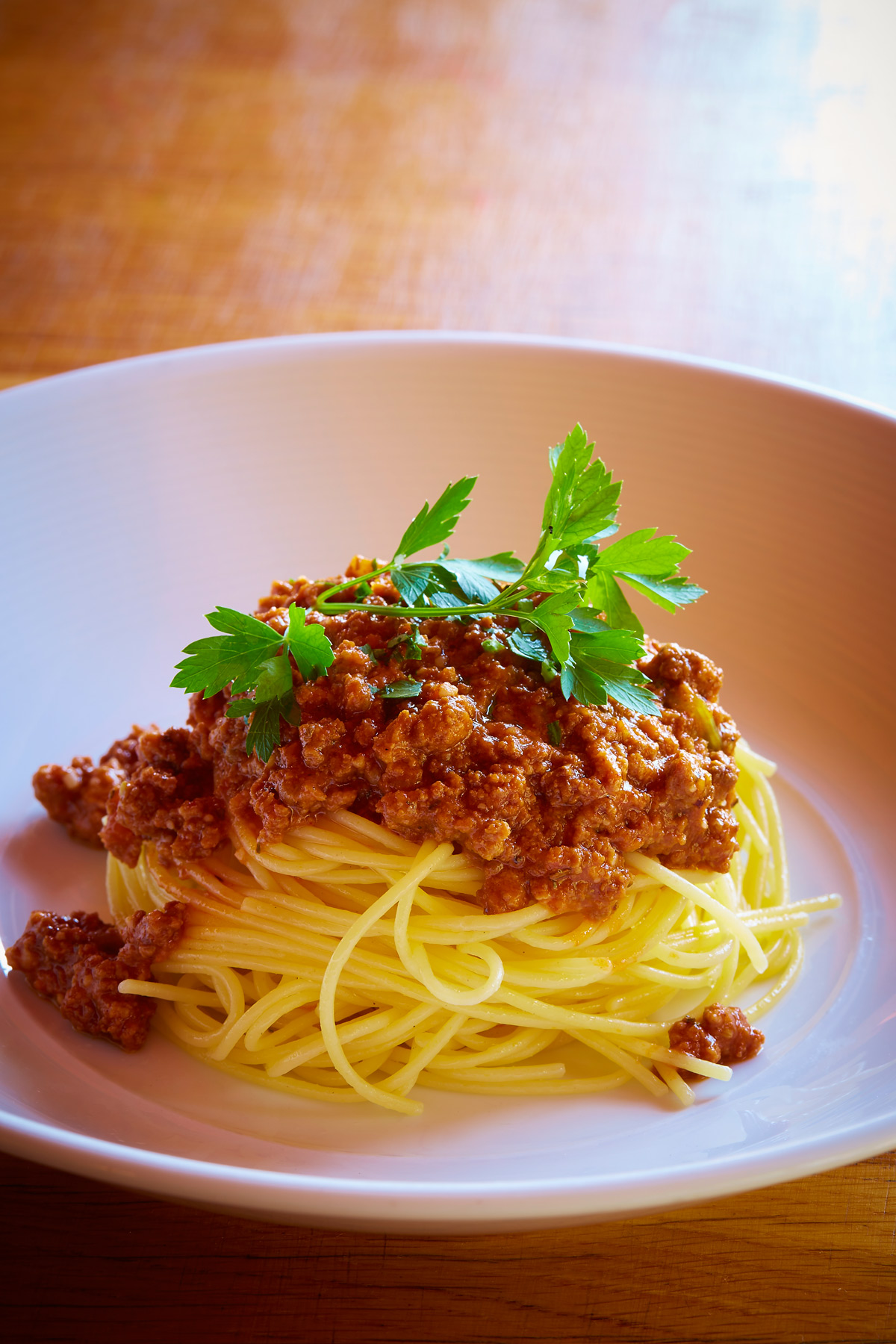 Taverna's gluten-free menu includes pizzas and five pasta options, including this spaghetti with bolognese.
Over the last nine months, I’ve discovered several places that satisfy my big Three Ps Problem: pizza, pancakes, and pasta. I’ve even uncovered a source for fried chicken. Bread? I’ve not found a gluten-free hamburger bun or sandwich slice that doesn’t have the texture of particle board.

Pancakes without gluten are easy to find in restaurants such as Kozy Kitchen and Company Cafe. Most gluten-friendly kitchens use Smart Flour Foods products for bread, pancake and waffle mix, and pizza dough. It’s a flour blend of amaranth, teff, and sorghum. The pancakes aren’t as fluffy, but once they are drowned in butter and syrup, the texture goes unnoticed.

I was blissful the day I found gluten-free pancakes on the menu at The Original Pancake House. Here, I can devour a short stack slathered with quality whipped butter and syrup while my friends dive into the famous apple pancake.

Pizza is a formidable puzzle, because supple crusts are achieved by using high-gluten flour. Sundown at the Granada offers a flatbread-style pizza with a crust made by Unrefined Bakery. The Fast Break, with smoked tomatoes, Gouda, bacon, wasabi microgreens, and topped with a Vital Farms egg, satiates me somewhat.

But Fireside Pies, the first artisanal pizza restaurant in Dallas, hits the p-spot with perfection. Although they use the same gluten-free pizza crust made by Smart Flour Foods that you’ll find at Taverna, Coal Vines, and Mellow Mushroom, the toppings beat the competition. The thin, crunchy brown crust is by no means a substitute for pliable dough, but it is topped with the same quality cheeses and ingredients as the regular pies. One summer night, I enjoyed a special pie topped with fresh corn, sweet cherry tomatoes, and pesto baked into a thick layer of melted mozzarella. The most gratifying part of the meal was the fact that I could sit at a table with my whole family and not feel like I was a special-needs diner.

Pasta is an equally arduous pursuit. I’ve yet to discover grocery-store, gluten-free pasta that isn’t heavy and gummy. Most are made with rice flour or a mix of brown rice and quinoa, neither of which yield at the touch of a fork (or even a knife).

In early April, I received a press release from Maggiano’s Little Italy announcing a “new gluten-friendly menu.” Maggiano’s has offered gluten-free pasta for a long time. I’d sampled their corn-based, penne-shaped pasta and found it a suitable substitute for Gorilla Glue. Two days later, I took my family to the Plano location, and, lo and behold, I scarfed a whole plate of ravioli stuffed with mascarpone, floating in a gentle Parmesan broth alongside finely chopped spring vegetables. Gluten or no gluten, this dish, served with the best chopped salad sold in Dallas, was one of the highlight meals of my gluten-free term. When I called to make arrangements for a photo assignment for this review, I was told the limited-time-only dish was created for Maggiano’s Make-A-Wish fundraiser. The ravioli disappeared on July 8. But if Maggiano’s can make delicate ravioli, why can’t other Italian restaurants?

Until then, I will head to Taverna, where the lengthy list of gluten-free items they hand you doesn’t feel like a kids’ menu. I blended in easily here. Besides six risotto dishes, they offer five pasta selections tossed with fancy ingredients. They use the same corn-based pasta as Maggiano’s, but they cook it properly. It’s as al dente as gluten-less pasta can get. The Bolognese sauce is hearty. The inevitable chalky finish that comes with gluten-free pasta is masked when covered with shrimp, garlic, white wine, grape tomatoes, capers, and butter sauce. 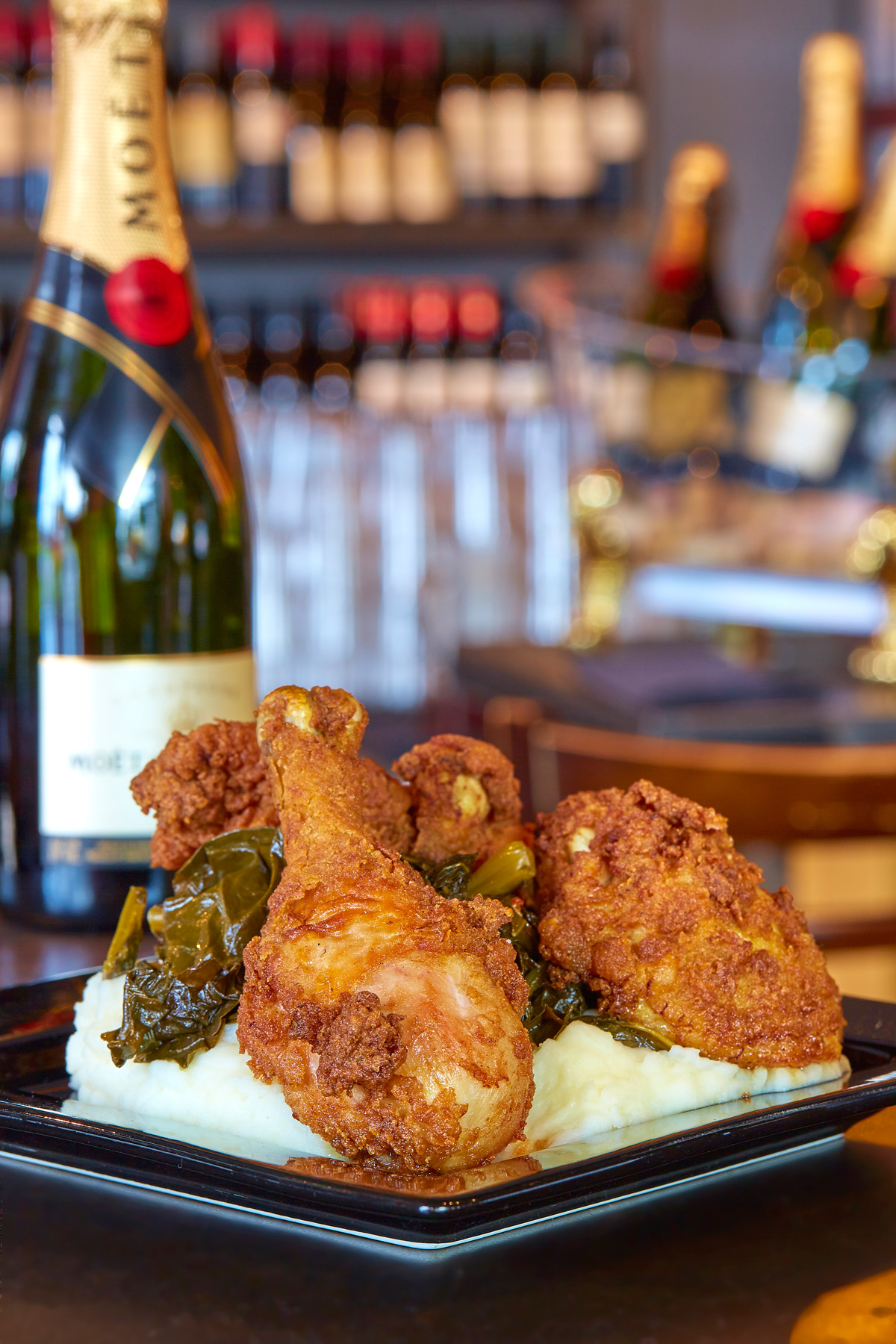 The gluten-free fried chicken at Max's Wine Dive is a dream come true.
Over my 18-year career as a restaurant critic, I avoided fried and processed foods unless they were part of a review. Those are easy corners to cut if you eat for a living and do not want to have your front door widened so you can get inside. But at least twice a year, I had to have a fix of greasy, salty, crunchy fried chicken seasoned with jalapeño juice and a hefty side of dill pickle chips. Every time I looked at a picture of fried chicken, my gut would thump like a danger-danger drum signal through my intestines.

At times I craved it so badly that I almost risked the onset of leaky gut for just a few glorious minutes with juicy chicken encased in crisp fried flour. Eating fried chicken is in my DNA. I can still taste my grandmother’s pan-fried-in-Crisco version. Cutting so many foods out of your diet is like losing close friends. To me, eliminating fried chicken was worse, like losing a sibling.

Thankfully, I discovered that Max’s Wine Dive serves a gluten-free fried chicken. I was skeptical when I entered the McKinney Avenue spot. But when the platter filled with mashed potatoes, collard greens, and three fist-size pieces of chicken was set before me, my heart raced. It looked like fried chicken, and five minutes later I confirmed it tasted close enough to the real deal.

The gluten-free version was an off-the-menu item. Russell says they sold one or two orders a week. “Now we have it on the menu, and we are selling 10 to 15 orders a day,” he says.

Russell uses the Ancient Grains Flour Blend made by King Arthur. The chicken is dipped in jalapeño-spiked buttermilk, rolled in flour and the same seasonings used on the glutenized version, and the chicken is fried in a separate fryer. (Note to highly sensitive customers: always ask if restaurant food is prepared in a gluten-free zone. Most places do not have a designated area.) Russell mixes the gluten-free flour first thing in the morning or at the end of a shift, so there is no chance of contamination from other flours in the air. The staff and servers have all been required to study the restaurant’s guide to food sensitivities. “It’s so rewarding to have customers who haven’t had fried chicken come in and eat our gluten-free chicken,” Russell says. “I can’t believe how happy they get.”

For those of us who have benefited from eliminating gluten from our diet, happy is an understatement. I think Russell said it best: it is badass.