The 83rd legislative session reminded us of what gets our political libidos kicking: divisive issues, dramatic confrontations, outsize personalities. The theater of a feisty state senator’s last-ditch filibuster against a measure restraining abortions glutted the Capitol and the airwaves with giddy spectators.

Jonathan Stickland was caught up in the excitement, too. Leading up to Senator Wendy Davis’ 11-hour monologue, the conservative state house representative from District 92—which comprises parts of Hurst, Euless, Arlington, Fort Worth, and Bedford—issued a fusillade of tweets like “Ready for battle tomorrow-Ready to defend life.” On the day of the filibuster, he joined other representatives in presenting Davis with 84,160 blank sheets of pink and blue paper, signifying the number of aborted fetuses in 2011.

So much about the 29-year-old freshman betrays an itch to fight. Stickland’s website opens with a photo of him in his Capitol office, a .40-caliber semiautomatic strapped to his waist. He brags about killing bills. He uses the metaphor of politics as warfare liberally.

Stickland—an erstwhile exterminator—has never held political office before this one. He was recruited to run for his seat by the president of the NE Tarrant Tea Party, a group for which he organized. After winning his primary and general-election races by double-digit margins, he vowed to compile the “most conservative voting record in the entire House.” So Stickland seems built for the type of zealous partisanship that we lap up.

But, then, there’s another Stickland. Amiable, earnest, self-effacing. He’s the one who’s sought to make inroads with allies and opponents alike, forging fast friendships with legislators such as Mary Gonzalez, a pansexual Hispanic Democrat from El Paso. He prefers collaboration and eschews the approach of a portion of the Tea Party who, he says, “just want to obstruct, hate, and vilify liberals.”

This version of Stickland is responsible for the session’s most significant bipartisan piece of legislation.

The first time most people hear about the Electronic Communications Privacy Act their jaws drop. The federal statute—which states, such as Texas, have incorporated into their laws—governs when police need to a get a probable cause warrant to search your email. Any email older than 180 days is fair game (and, under some interpretations of ECPA, an opened email is also searchable, without warrant, at any time).

The law, which implicates the Fourth Amendment, was passed in 1986—when, according to Scott Henson, of the Texas Electronic Privacy Coalition, the leading computer on the market was the Commodore 64, “as in 64K [of RAM]—kilobytes, not gigs.” ECPA hasn’t been repealed or updated since. In other words, 2013 technology is subject to a 1986 law—one that never fathomed the rise of cheap memory, email, and cloud computing. 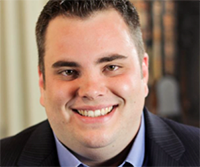 Jonathan Stickland Courtesy of Jonathan Stickland
In February, Henson and Kathy Mitchell, also of the TEPC, visited Stickland’s Capitol office to build support for HB 1608, a bill requiring police to obtain a warrant to search cellphone location data. It was a no-brainer for Stickland, who has a libertarian streak on privacy issues. He signed on and became a joint author. But what he was more interested in was a revision of Texas’ ECPA law—so police would have to get a warrant to search any email, regardless of how old. It was a big ask—with national implications—for a young first-termer. Mitchell admits that had an email bill been the TEPC’s top priority, the group would’ve sought a more senior member to shepherd the legislation through the House—someone like Bryan Hughes, a Republican and six-term member from Mineola, who introduced the cellphone location bill.

But Stickland saw an opportunity to build a cross-aisle consensus and seized it. He filed the bill a day before the March 8 deadline. And along with the TEPC—whose lobbying effort was spearheaded by the ACLU and liberal and Tea Party activist volunteers—Stickland made the rounds to persuade lawmakers to climb on board. The email bill also took advantage of the coalition of Republicans and Democrats that the TEPC had marshaled in support of the cellphone location bill.

The cellphone location bill never made it to the House floor, but Stickland deftly attached his measure as an amendment to HB 2268, a bill that passed the House. In late May, the Senate followed suit. While the legislation was awaiting Governor Rick Perry’s signature, news of the NSA’s PRISM surveillance program broke, landing electronic privacy back on the national agenda. The timing was perfect: says Henson, it made Stickland look “eerily prescient.” On June 14, the governor signed Stickland’s measure into law, effective immediately.

Now, in Texas, state law enforcement must secure a probable cause warrant before it can search private emails or cloud content. According to Allie Bohm, a speech privacy and technology policy strategist with the ACLU, Texas is the first state to enact a law protecting email content from warrantless searches. But it won’t be the last. Stickland’s office has received phone calls from Republican and Democrat activists and policymakers from California, Georgia, Kentucky, Oklahoma, Tennessee, and Virginia, who want to pass similar legislation in their states. And it puts pressure on Congressional lawmakers in Washington to pass a bill to amend ECPA that was introduced in the spring by Senators Patrick Leahy, a Vermont Democrat, and Mike Lee, a Utah Republican.

Not bad for a freshman.