On July 2, Councilwoman Angela Hunt had a problem that sent her to Twitter. “I’m tired of bums in Main St. Garden. Counted 12—many sleeping. Where is DPD? Where is Bridge?! Mary, help!” At the end of that first tweet to City Manager Mary Suhm, Hunt included a link to a photo of three men, luggage surrounding them, looking solemnly at the camera.

The tweets led to a lively discussion, much of it online, about homelessness. Should a councilwoman refer to people as “bums”? Homeless people have as much right as anyone else to use a city park. Should police be called just because someone in a park looks homeless? News outlets swarmed Main Street Garden asking park-goers their thoughts and capturing the “bums” in action. They were shown charging their phones, sitting, and talking. They looked sad. They were dressed in shabby clothing. For almost two weeks, the coverage continued. And, just like that, Main Street Garden became the bum capital of Dallas.

Perhaps if you live in the M Streets, as Hunt does, a group of men with luggage at the park is unsightly. But for those of us who live downtown, it’s not a bother. And we don’t think of the park as an encampment of homeless. Our Main Street Garden is a large plot of grass where we can play and watch movies. It’s our Saturday-morning ritual and our Wednesday-night meetup. It’s our happy hour and our refuge from the concrete. It’s our backyard.

Main Street Garden was envisioned in 2003 and 2006 with bond programs citing downtown residents’ desire for green space. In those years, I was in college, in Oklahoma. Green space was all I had. So I didn’t care about this park. But Dustin Bullard, downtown resident for seven years, did. And so did Bella, his dog. “That block was just awful before the park opened,” says Bullard, a landscape architect and planner at Downtown Dallas Inc., an organization that partners with the city to maintain and fund downtown parks. “I would call it one of the worst blocks in downtown before the park.”

Bullard would take Bella to Bark Park in Deep Ellum for her daily exercise. If he wanted to take Bella with him while he enjoyed a beer, his only option was City Tavern on Main Street. So when Main Street Garden was being built, Bullard got involved. “I think everyone had a different vision and a different goal for the park,” he says. “As a resident and as a landscape architect and a park planner, I really saw the park as a place for residents to mingle and enjoy open space.”

The park, designed by Thomas Balsley Associates Design, has a small playground, a dog run, cafe, and stage. There’s also a public art commission. The pieces, designed by Leni Schwendinger, are steel structures with LED strips that change colors. One of the more used elements is the water fountain. Shooting streams of water 6 feet into the air, the fountain is the perfect reprieve from the heat in the summer and an accidental skating rink in the winter. The Great Lawn, wood seating, and granite pathway enhance the clean lines of the park. And the big, blinking PARK sign is a reminder of what used to be on the site (a parking garage).

Main Street Garden is exactly what Bullard envisioned. I met him there when I moved downtown a year ago. While our dogs sniffed each other’s nether parts, he and I talked. That’s also how I met Willis Winters, assistant director for Dallas’ Park and Recreation Department. His dogs, Ginger and Ash, weren’t all that interested in my Samoyed, Miko. I also met a young visitor from Australia. He missed his dog. The guy had come to Dallas with a tour group, but he had slept in, so the group had left him. He’d decided to make his own fun, spending the day walking around downtown, talking to locals, and handing out beers. We talked about Dallas, dogs, and how nice it is to have a park in the middle of downtown. 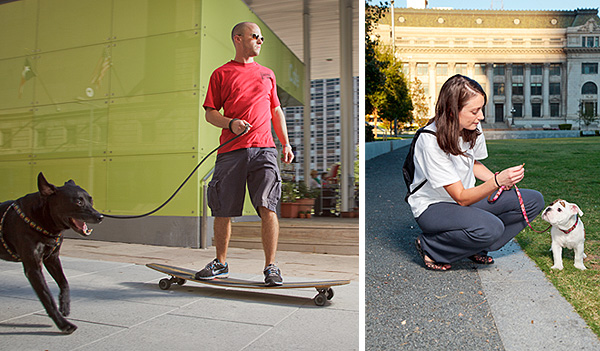 Pete Townsend and Quagmire check on business; Lesley Nelson takes her puppy, Buster, for a walk. photography by Ben Garrett
photography by Ben Garrett
I’m not sure if more conversations like that happen on The Great Lawn or at the onsite cafe, the Lily Pad. Opened a year ago in June, the Lily Pad has become the ultimate happy hour for downtown residents. Part of the allure is the food (the Lily Pad is owned by chef Doug Brown, who also owns Beyond the Box), and part of it is the workers. One of the first nights I lived downtown, I talked to Mattie Huffman while she worked her shift. From what she said and the way she said it, I could tell that the Lily Pad wasn’t just a job for Huffman. It was her establishment. And no one messes with it. I got the same impression when I talked to Pete Townsend, the manager of Beyond the Box and the Lily Pad. Townsend is one of downtown’s more recognizable residents. Not because of his red t-shirt with black Beyond the Box logo or his black Lab, Quagmire, but because of his 57-inch longboard. He got it when he moved downtown in March. He ditched his car and rides the longboard between the Lily Pad and Beyond the Box to check on things, and to the bank, usually with Quagmire pulling him. The Lily Pad employees have added a large Jenga set (sanded down by Townsend himself), a foosball table, and ping-pong.

“Most of my customers I know by name, and I know where they live,” Townsend says. “It’s like a little family.” There’s even a mascot for this family. His name is St. Paul. He’s a white pigeon that sits above the Lily Pad, watching over his friends as they watch over the park. 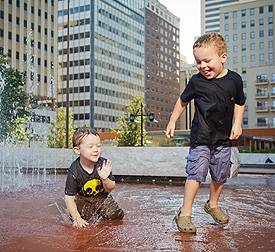 Atticus Garratt (left) and Nova Boswell splash in the fountain. photography by Ben Garrett
photography by Ben Garrett
But the Lily Pad isn’t the only place that opened as a result of the park. Since the park’s opening, UNT has moved its chancellor’s office downtown, the Statler Hotel was sold, restaurants have opened, and work on the UNT Dallas School of Law has begun. “Main Street Garden sits in the middle of all four of those things,” says John Crawford, president and CEO of Downtown Dallas Inc. “The creation of the park, I think, has a lot to do with the additional development that’s occurred since that time. That’s an important deal, a big deal, bigger than we ever thought.”

The park has had a couple of hiccups in its two years. For one, the material used on the playground got hot in the summer. As soon as the problem was discovered, the material was switched out. For another—and this is more personal than anything—the Christmas tree, the one to be lit November 19 during the City Lights celebration, is ugly. It’s a 65-foot-tall metal structure with more than 10,000 feet of LED lights. It was designed to complement the architecture of the park. It’s more a reflection of what the designers thought the residents would like rather than what they actually want. I told Crawford I didn’t like the tree. He says that it may be in for some changes after this year. And that’s another thing I like about the park. The people behind it really do have downtown residents’ best interests in mind, and they’re willing to listen and make changes.

Main Street Garden hosts kickball teams, movie screenings, and even football practice for kids. You never really know what you’re going to find until you get there. One night, I may meet a homeless man with a fantastic story. Another, I may run into an author, architect, or teacher. I might even run into a city councilwoman. Maybe I’ll tweet about it.

“I’m tired of politicians in Main Street Garden. Where is DPD? Mary, help!”