The last time restaurant consultant Michael Costa was making news, it was for jumping over the patio railing of the now defunct Las Colinas Prime and speeding away in his car to avoid arrest. Irving police officers and agents from the Texas Alcoholic Beverage Commission had gone to the restaurant on a Thursday evening in May 2009 looking for Costa and consultant Brian Luisi.

In fact, it was the second time authorities had gone to the place to make a bust. Three months earlier, enforcement officers had seized 54 bottles of unstamped, unlicensed alcohol and two funnels from the premises. The restaurant was owned by Bill McCrorey and Michael Thibodeaux and called, at the time, Republic Las Colinas. Costa was working there then, too. McCrorey had hired his consulting group to run the place. And run it he did—right into the ground. One former employee said, “I worked for them less than a week, and I saw scotch and vodka bottles filled with cheaper versions. I never got paid. Nobody did.” Las Colinas Prime closed in the fall of 2009.

After I wrote about the saga on D Magazine’s Side­Dish food blog, I received comments and emails from dozens of vendors, contractors, and former employees of Costa’s. They all had unflattering things to say about his business practices over the years. Bounced checks and broken promises were common complaints. Judging from the number of bridges he’d burned and his hasty retreat from Las Colinas Prime, I figured Costa was done in Dallas. Not so. After more than 20 years in the restaurant business here, he’s still working hard to wear out his welcome.

A native of New York City, Costa moved to Dallas in 1987. Some of his first restaurant gigs were at Amadeus and Patrick Colombo’s San Simeon Restaurant. After San Simeon closed, Costa went on to join Colombo and his partners in the original Sfuzzi a few years after it opened and served as general manager and vice president of operations for almost seven years. Since then, his name has been linked to lofty restaurants such as Toscana, Mediterraneo, Popolos, Vino & Basso, and Trece, to name a few.

Along the way, Costa left a trail of legal battles, bad checks to vendors and employees, and ill will. In 1998, one of Costa’s staff at Mediterraneo called the Department of Labor and reported Costa’s tip-sharing practice. “Costa designed a tipping system so he didn’t have to pay the manager,” said the former Mediterraneo captain. “We had to tip almost 75 percent of what we made back to the house. When the Labor Department came to investigate, Costa spun it like it was his idea to have them come in. Like it was just a standard situation that restaurants do.” The Department of Labor made Costa change the tip-sharing practice. 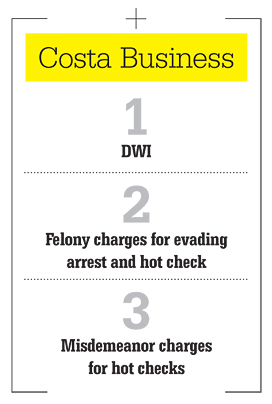 Today, Costa’s criminal record includes two felony charges, one for theft of service over $1,500, which is still pending, and another for evading arrest by vehicle. He was arrested for DWI in May 2007. In November 2009 Costa was convicted of three misdemeanor thefts for writing bad checks of $500 or less and received 24 months of probation.

The probation appears not to have slowed him down. A little over a year after Costa closed Las Colinas Prime, in November 2010, a job listing appeared on Craigslist: Experienced female model types are needed for upscale sports bar and grill. Call Michael Costa. I dialed. He answered. I asked him if he was back in the restaurant business. “Yes, in fact I’ve got several things going on,” Costa said. “I’m walking into a meeting. Call my publicist.”

As we go to press, that publicist is owed $4,200 after helping Costa get the doors open at his newest restaurant, The Office Grill, located in the former Fleming’s/Rick Stein’s/Tre Amici spot on the Tollway at Frankford. The Office Grill is, according to its website, “An Upscale American Grill designed and elegantly appointed like a large boardroom and created to provide our guests with multiple streams of business, sports, and the latest in food trends, while being served by sophisticated, beautiful ladies dressed as secretaries.” It’s a restaurant, a bar, and a place for people looking for a virtual office. Besides free wifi, there is a full-time administrative assistant on staff who can type, copy, fax, scan, and notarize documents. There are storage lockers where you can receive mail—all of which, also according to the website, “qualifies as a tax write-off.”

Two weeks after The Office opened, I began receiving emails from disgruntled employees and vendors. Since then, I’ve talked to a dozen people who have done business with Michael Costa in the past and at The Office. They all asked not to be identified, saying they feared reprisal. But they all tell similar stories.

Four of the 12 people I interviewed used the term “bully” to describe Costa. “He sends threatening texts,” says an independent contractor who worked with Costa on several occasions. “He never accepts responsibility and always blames other people. He will try to scare you.”

Several of the kitchen employees who left The Office Grill in frustration detail Costa’s modus operandi. “They would say payday is Friday and then on Friday say payday was Monday and then payday was Tuesday,” says one. “On Tuesday we all got checks, and on Wednesday they all bounced.” One kitchen staffer was seen crying in the kitchen because his car was about to be repossessed because the paycheck bounced. Produce vendor checks bounced, too, including one for only $60. Each week, orders had to be placed with new vendors who hadn’t yet been burned. One worker traded the money he was owed for “free” food and drink at the restaurant.

I ask Costa about the bad checks situation. He immediately blames the former chef. “He was a guy with a real anger issue,” Costa says. “He threatened that he was going to call you.”

I acknowledge that I talked with the former chef but tell Costa that I also interviewed several other Office Grill employees. Once again, I ask
if he was writing bad checks.

“We were months late getting open,” Costa says. “We switched banks and had revenue going into an account we no longer had access to. We got all of that ironed out. As far as I know, we are back in good graces with everyone. We owe a few people, but we plan to work our way out of it in the next 30 days. We’ve been making payments to contractors and designers. So I’m not concerned about it.”

Costa claims his restaurant group is the majority owner of The Office Grill. But Flora Mascolo, the widow of Toni & Guy founder Guy Mascolo, has invested in the operation. One person close to Mascolo says, “Somehow he bamboozled her. She told me she has already written a check for $400,000.”

Costa tells me he put more than $500,000 into the project. “I’ve put in a chef’s bar for foodies to feel a part of the kitchen and watch chef John Kleifgen orchestrate his kitchen,” he says. “I’ve changed the carpet and refinished the furniture. We have plans for two outdoor areas. One will be a quiet spot, and the other will be a party patio off the bar.”

Perhaps this time Costa won’t bother putting a railing on the patio.