A friend of mine walked into the Lakewood Landing the other night so filled with confidence and goodwill that every head turned. In that good, dark dive, where men sit up at the bar, have a beer, and jaw endlessly, jovially, about nothing, she glowed. She was shiny. Her shininess was visible through the thick wooden banisterish posts that separate the bar area from the booths. It was visible back behind the pool table. It was visible from the street and likely the moon. In the last six months, she’d shed a bad relationship, run a half-marathon, and climbed a mountain in Tanzania. I swear, if she had walked up to the Landing’s jukebox, a fine, fine thing in itself, and given it a good whack with her elbow, she could’ve made Aretha sing.

We sat at one of the half-dozen booths, and I tucked my feet up on the torn vinyl seat while she told me about her various dating adventures: the Boy Scout, the fencer, the New Yorker. The TVs up at the bar flickered our direction—golf was on, maybe, or basketball, with its yellow hardwood light—and she chatted about the men who’d noticed her, the next races she wanted to run. The beer was cold and clean in my mouth. 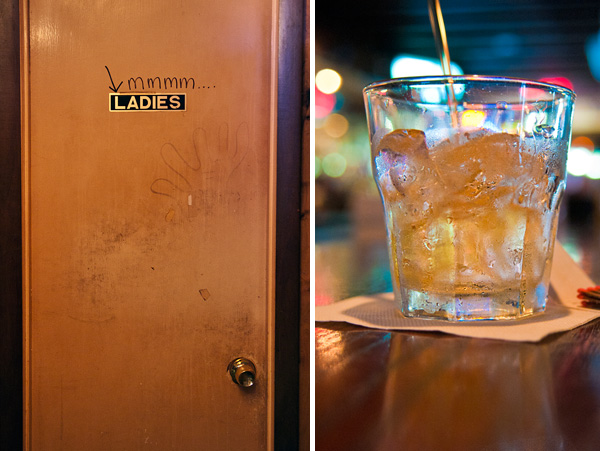 photography by Bud Force
photography by Bud Force
We ordered another round (Shiner for her, water for me and my upcoming early morning). I guessed the barman had done this a long time. He moved in and out of our conversation gracefully, without breaking the evening’s flow. How I admire someone who is accomplished at something. The Landing wasn’t crowded, though it was Saturday night, and the staff managed the bar and the rest of the room (us) easily. (The bar’s much-loved general manager, Cullen Herendon, regularly tends the bar.)

The Landing, in Old East Dallas, has won awards for being a bar where you relive greatness or starve as an artist. It’s a joint my old friend Robert, nicknamed the official Mayor of Drink Town, first took me to a dozen years ago—and the bar feels the same. It’s a dive, beautiful with cluttered photos of patrons and owners and signs and junk. And if ever there were a place where smoking should be allowed indoors, the Landing is it. 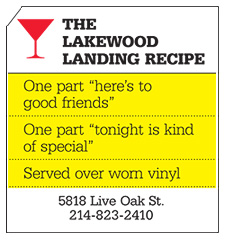 There’s no better place to tell a story or remember how it feels to be shiny than in an old bar. But if you’re shiny and inclined to make the most of men’s notice, someplace quiet and dark might not be your best bet. On our way out, we saw a woman on the patio deck, reading a book in the fading spring light. Someone else had ordered a burger, was eating one-handed; other people lit cigarettes, gesticulated widely, their tattooed arms moving with all the enormity of life’s drama and humor. I liked their twentysomething hair, the messy carelessness of it, the way they took their bodies for granted. They were vivid, but none shone.

Shine, I think, comes when someone is on the other side. Of divorce, breakup, grief, sadness, stasis, mire, antics. I think it comes when a person is whole and ready and open. Perhaps this is why it’s fleeting; no one can be ready forever. Something starts or it doesn’t, or you grow static and still, but no longer ready. And I wonder if this is what is so attractive, why someone shiny is so appealing: a shiny person is ready to go somewhere. And you’re catching her at the beginning of something exciting.

These days, I’m not going anywhere. My kids are here, my husband. Our lives have a sweet steadfastness. At the Landing, with my friend, I remembered my shiniest days and meeting my husband. Those memories, together with being with someone so brightly happy, brought a glow to my cheeks.

My husband was in bed when I got home that night, the kids sleeping peacefully. He turned over as I climbed under the covers and asked me how it was. I got hit on, I told him. He grinned, then put his arm around me and went back to sleep.