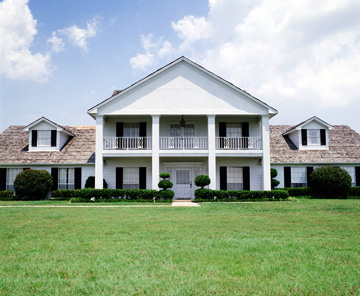 TV's Ewing family never really lived here, but the tourists keep coming.
What they say: When Mayor Joe Cordina was visiting Turkey two years ago, touring cities and meeting officials, he mentioned he was from a small town he was sure his host had never heard of. “You’re the mayor of Parker, Texas?” the official repeated. “That means you’re J.R.’s mayor!” Cordina’s photo was in six newspapers the next day, and the entire city staff left early to find out who shot J.R., since the show is still in syndication there. Yes, Parker remains best known as the home of Southfork Ranch—and, since 2008, the home of Olympic gold medal gymnast Nastia Liukin, whose family lives next door to Cordina. But for locals, it’s simply a piece of countryside—sometimes a rather large piece—not too far from malls and highways. From Cordina’s 1.7-acre lot, he can be at the Sears at Collin Creek Mall in 15 minutes. But you’d never know it looking out at the 5-acre pond that drew him here. Many people who move here do so because they have horses and/or crave some fresh air. Some are corporate executives who find mowing their own lawns cheaper than therapy. The town has many multiple-acre residences but most are on 1.5 to 2 acres. Residents accidentally leave their garage doors open (sometimes over a weeklong vacation) and come home to find things just as they left them. Homes that have been on the market in the last six months range from $169,000 to $850,000, with the average being $408,217. Two new subdivisions are in the works, with 560 new homes combined. Those who have lived in Parker for decades worry about growth, but Cordina says managing that is a top priority: “Slower economic development and higher quality is what Parker is really about.”

What we say: Parker has been in our top 10 since we added it to the list of suburbs to survey in 2004. It debuted at No. 4, made it to No. 2 in 2006, slipped to No. 5 in 2008, and tops our list this year. Though the grand ranch estates are the most eye-catching residences in Parker, the town also has two trailer parks. Parker benefits from the development of all the towns that surround it, meaning residents can look at long stretches of pastures, curved roads, ponds, and trees yet reach civilization lickety-split. Parker isn’t all country bumpkin, though. It has its own vineyard (Khatter Vineyard).

Interested in visiting? Read about our own day trip.