After living through the darkest days of the AIDS epidemic and a failing financial system, the former Metropolitan Community Church of Dallas decided that retreat was no longer an option. Instead, the 280-member-strong congregation—largely lesbian, gay, bisexual, and transgender—formed an attack plan. In 1991, the church renamed itself the Cathedral of Hope and celebrated the diversity of its membership. A year later, it moved into a new building; by then, the “Cathedral” part of its name was no longer wishful thinking. Its ranks had swelled to more than 1,000, making it the country’s largest LGBT church.

Throughout the past two decades, I have been asked repeatedly why I think the largest predominantly lesbian, gay, bisexual, and transgender (LGBT) church in the world is in Dallas, Texas. You would think by now I’d have a good answer.

When I arrived in Dallas in 1987, this church was known as the Metropolitan Community Church of Dallas. It had 280 members and, like the rest of the region, was suffering through a recession, which also coincided with the worst of the AIDS epidemic in our city. There were times when our church performed eight funerals a week. In one year, I presided at the funerals of three gay bar owners and four significant community leaders.

Ultimately, the church has performed more than 1,500 HIV/AIDS funerals and memorials. I don’t know of any house of worship outside a war zone that has faced such devastation. People have asked how we dealt with the pain and grief, but, even as I write these words, tears rise up to remind me that we didn’t deal with it. We packed it away in order to care for the living.

No one can ever appreciate who and what this congregation is without understanding the times through which we lived. Why is the only liberal/LGBT mega-church in Dallas? The answer resides in our name, at least in part. In the midst of a deep economic recession and a deadly epidemic, a congregation of people who had been largely rejected by the churches of their childhood made a heroic choice. In a very closeted city, this congregation decided to be open and out about its sexuality, its faith, and its hope. In 1991, this battered and bruised community built the largest sanctuary in the world for lesbian and gay people and changed its name to the Cathedral of Hope.

The church moved into the new building just before Christmas in 1992. Images from our Christmas Eve service were broadcast by CNN. By Easter of the following year, membership had grown to more than 1,000, and the budget exceeded $1 million. This church grew into the name “Cathedral” and lived up to the name “Hope.”

During the 1990s, it produced and aired the only national broadcast by any lesbian or gay group ever. It cared for more than 800 people living with AIDS and expanded its outreach to give away more than $1 million each year in goods, services, and financial assistance. The church stopped debating the fundamentalists about whether  you can be lesbian or gay and Christian. Instead, we adopted a motto from Mother Teresa of Calcutta: “Too many words. Just let them see what we do.”

Today the Cathedral of Hope is in the midst of building a 175-seat Interfaith Peace Chapel in the same organic style that Philip Johnson used to design the ultimate cathedral. It will seat more than 2,500 people and be the size of St. Patrick’s in New York. The Cathedral of Hope is now one of the largest congregations in the United Church of Christ.

Dallas is a very different city from the one I moved to in 1987. It is a very different city from the one in which D Magazine began publishing in 1974. In our own ways, I hope we both have helped to make this a better city. I have two teenage daughters who were born and raised in Dallas. They have been educated in the schools of Dallas ISD. They have worshipped in a radically inclusive, progressive church. My hope is that someday they will look at reruns of the old television show Dallas and laugh because nothing could be further from the truth about the city they call home.

Rev. Michael Piazza is dean of the Cathedral of Hope and president of Hope for Peace and Justice, a nonprofit organization. 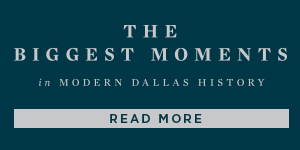