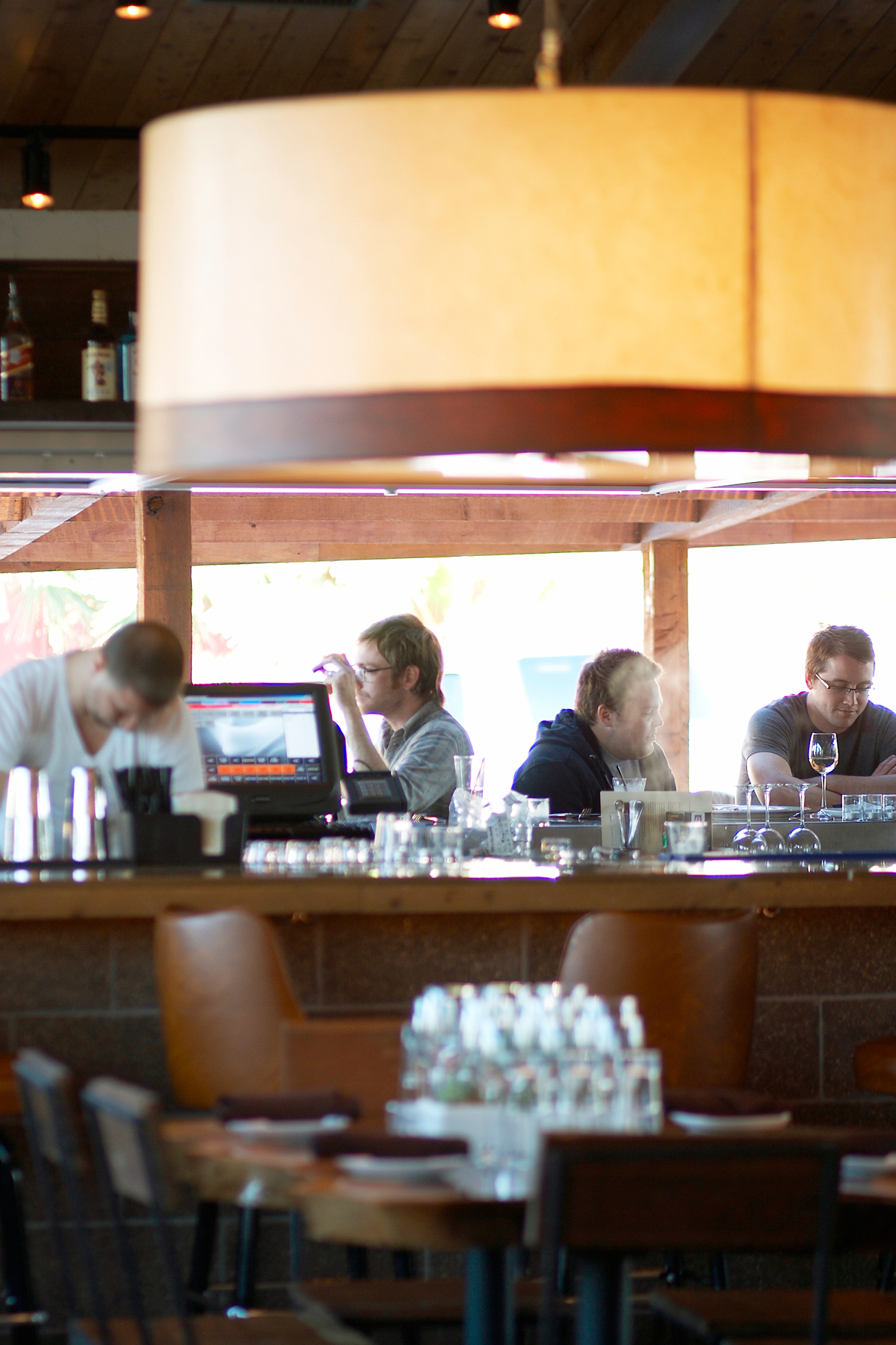 THE OTHER O.C.: Bolsa. Photography by Kevin Marple
Photography by Kevin Marple
A priest in college once defined a major world religion for me as one that you could leave. When you returned, after exploring other traditions and ideas, you could find corners of your own religion that embraced what you loved in others. Catholics who loved Sufi mysticism or Rabbi Moses Maimonides’ detailed thinking could delight in St. Teresa of Avila’s or St. Thomas Aquinas’ writings. A major world religion, he said, would be big enough, encompassing enough, inclusive enough that you could find in it what you loved in other worlds.

I realized that I would be okay in Dallas, that I could live here again, three weeks after we moved to the Kings Highway district in Oak Cliff, as we unpacked our farmer’s market goodies and the woman across the street padded over in old sneakers to offer us a loaf of warm homemade bread.

I grew up in Dallas, across the street from Hillcrest High School in a ’60s house with big pecan and peach trees, but I’ve lived elsewhere since 1996. In the months after my husband and I decided to move back here and before we arrived, I wondered how I would fit into the world I left several lifetimes ago. Norma’s Cafe on Davis Street, with pie meringue white and tall as church hair, was the first place I wandered into after we unpacked our boxes last July. I sat in one of the vinyl booths, back and to the right. “Empty tables back thataway,” a friendly customer said, waving his long hands toward thataway as I walked in, and thataway I have sat ever since. 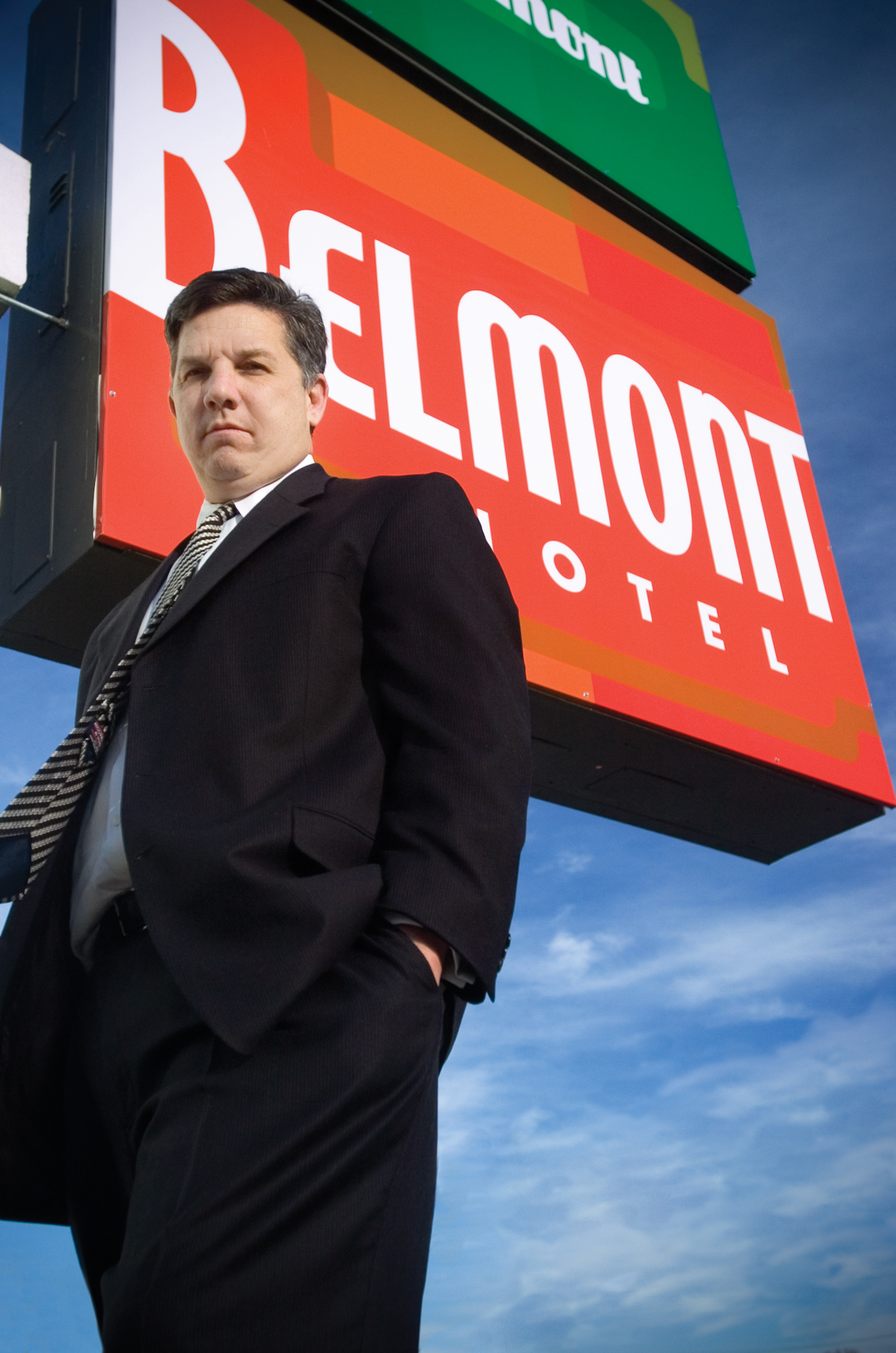 Belmont Hotel owner Monte Anderson. Photography by Elizabeth Lavin
Photography by Elizabeth Lavin
We are just now getting to know Oak Cliff, the tire shops and Bishop Arts, the tony Belmont Hotel, the neighbors and the ice cream men who ride bicycles, ring bells, and sell goodies my Spanish isn’t sophisticated enough to understand. On our way to school, my 2-year-old daughter and I admire the multitude of bridal/quinceañera shops on Jefferson Boulevard with dresses so brightly colored that only very young skin, sheened with excitement, could possibly eclipse them. Sometimes the three and a half of us—my husband, my daughter, my giant pregnant belly, and I—play in the afternoon light at leaf-cushioned neighborhood parks and revel in the endless rows of trees that ease my longing for home, Austin, the city I left after nine lovely years.

My daughter prefers not to nap sometimes, and so I load her into the car and go for sleepy drives. Her eyelids cannot resist the lure of tires rolling across pavement under canopied streets. We tune in the sonorous lull of KERA, the hosts’ perfect grammar translating to a soft murmur of voices. Down the elegant bends of Colorado Boulevard we go, across Sylvan Avenue to Kessler Parkway, in and around and through the side streets, the steep hills and verdant landscaping, the inviting house where we dropped by a Popsicle party because all the neighborhood kids were invited. I admire Kessler Park, the architecture of the lovely houses, the confidence of the round arches and J-sloped roofs that remind me of hair curling across shoulders. I often slow down and crane my neck at some of the homes on the steepest hills, trying to figure out where the front doors might be, imagining what it’s like to take out the garbage, if kids live there who complain about dragging trash cans up the driveway. 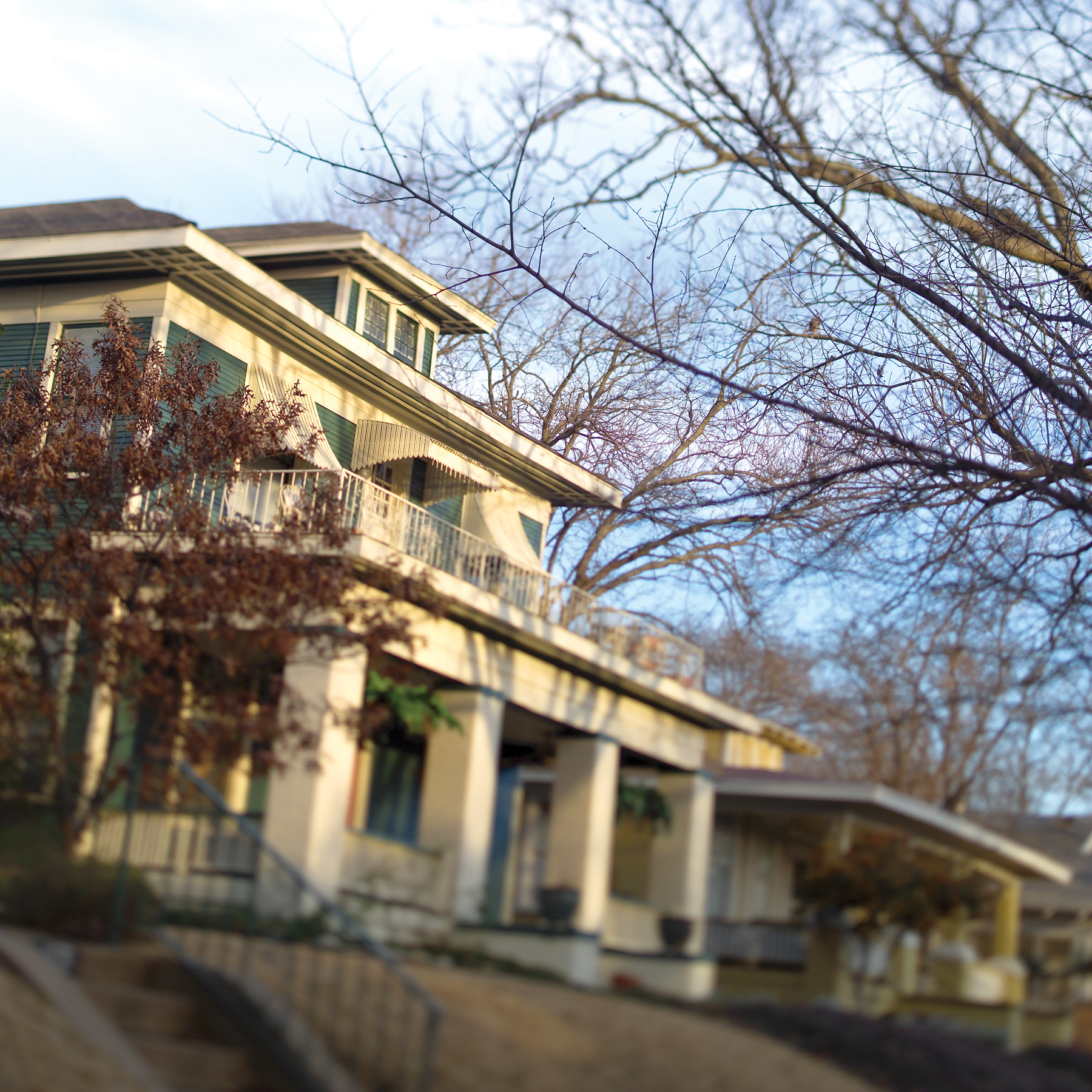 And then back down Polk Street or up Tyler Street, big one-way roads where once or twice I’ve seen something I’ve never seen before I moved to Oak Cliff: memorials soaped on back windshields. A young man’s name, followed by the dates of his life, too short. Or a message to Aunt Mary, who is missed. The cars and their messages park on the same road where schools let out, the kids sauntering with electric grace, the fat and the slim, the leaders and followers, black and white and brown, all crossing streets, talking as fast as they can. Two teenagers wait at the bus stop, his warm black face turned fully to hers, her elegant caramel hand flirting and pushing him away. He turns his cap around and smiles at her with his whole body and everything that’s glorious about loving someone at 17.

And this is what I love about our neighborhood: not the teenagers precisely, but the many places. That lives overlap in physical space—different ages, different races, different economies. The way walking a few blocks one direction takes us to enormous, stunning homes rich in character and a few blocks the other direction takes us to dollar stores and the clean, spare ice cream shop where telenovelas play on TV and tortas are advertised in neon in the window. Where wine bar Bolsa is across the street from taco stand El Si Hay. I ran to the grocery store at 7 o’clock one Tuesday night and saw a man wearing a dark fedora and full-length animal-print coat. His is a different life than mine, a different world than I live in. 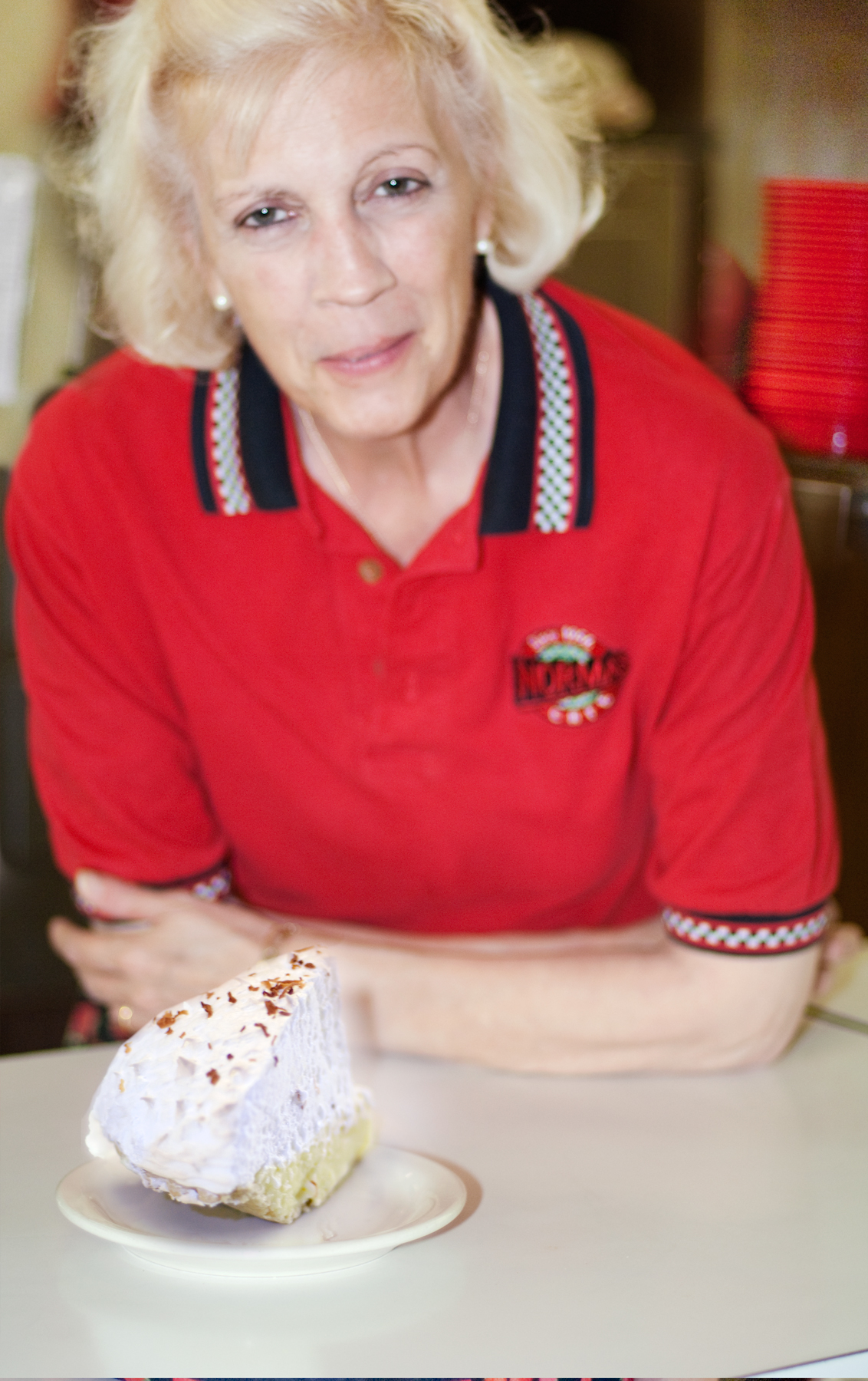 Jennifer Ahmed at Norma's Cafe. Photography by Elizabeth Lavin
Photography by Elizabeth Lavin
I have lived among other people long enough to know that each life is distinct, no matter how outwardly similar. And it’s possible I am recognizing the multitude of lives in Oak Cliff because I am new here, my eyes fresh and curious. Perhaps some people are always aware of different worlds because they take the time to look each day. Lately, I get the same jolt I used to feel when I lived in San Francisco and heard various Asian languages (Thai? Korean? Khmer?) spoken while walking through sundry neighborhoods. It’s as if physical space is compressed and worlds unlike the one I was born into, or the worlds I have chosen, are nearer, more palpable. The resulting dichotomies, the overlapping of lives and startling juxtapositions wake me up. They prevent me from falling into the closed circuit of familiar routine that is so easy for my life to become.

The heart is essentially alone, another wise college priest, this one from a small Texas town, told me. There are moments of communion, but the heart, with all its desires, is separate. Yes. And yet. Driving or walking along the curves of tree-lined streets, down the straight three-lane roads, into and through the bright energy of Bishop Arts on a Saturday night, I am separate, yes. And yet. The other lives around me are so close I can touch them, almost, the way my daughter oh so briefly touches iridescent soap bubbles in the morning air.