Like everyone who lives a double life, Natalie Wolc made the mistake of thinking she could pull it off indefinitely. The two worlds she lived in didn’t appear to intersect. Each one satisfied her in profound ways. Nobody in the day world suspected Wolc was a roller derby skater, and none of the other skaters was particularly interested in what she did during the day. They had day lives, too, all kinds, but none of it ever had any bearing on what they did at night.

By day, Wolc was a Unitarian/Universalist youth minister. She liked working with young people, and the whole congregation was great. Back in university, she’d been a feminist and, as she puts it, “a bit of a hippie.” She’d shed some of it after coming into the real world but kept what she felt were its important tenets. As for Wolc’s night world, well, there wasn’t any of the hippie there, and though there was a twisted kind of feminism in force, since it was all about women, her old friends would not have supported her. But Wolc loved this other life, too, and told herself that, in its own way, it was making her a stronger, better person. This world was purely physical, full of risks, excitement, even violence. But much to her surprise, the violence didn’t scare her. In fact, she quickly came to embrace it, and the name she chose for herself reflected it. The other girls had picked names for themselves, too. There was Massey Graves, Strawberry Death Cake, Trigger Mortis. Wolc invented the name Gloria Vanderbitch. She just knew her congregation would not approve.

It’s difficult for anyone who came of age before the 1980s to regard roller derby with anything but revulsion. It was a sham sport created by sleazy promoters for no purpose other than to show women fighting. This wasn’t hot women cat-fighting, but brutish, low-class broads brawling with bare fists and bloody knuckles. Of course, this all happened years before Wolc was even born, but an awful lot of her congregation were over 45 and remembered it from when they were growing up.

The roller derby that she and her sisters played was a brand-new sport, created in Austin only a few years earlier. Women’s roller derby leagues were popping up all over Texas. Dallas had two, the Dallas Derby Devils in Irving and Assassination City in East Dallas. One of Wolc’s friends made her go to an Assassination City bout, insisting she’d love it. Wolc doubted that. But once she saw it for herself, she was hooked. She thought the camp and trashiness were a hoot. The game was fast-moving, and all the players exuded a tough confidence, something she did not possess. After the game, she also found that the women were friendly and easy to talk to. They invited her to join them, but Wolc told them she didn’t think she could. After all, she was fat and had never played any sports, certainly none involving teams. Worse, she could hardly skate. When they told her that those things really weren’t important, she decided to accept the challenge. She signed on as “fresh meat” and started going to practices. To her surprise, she quickly got the hang of it and, before long, got assigned to the Bombshell Brigade, one of Assassination City’s four home teams. 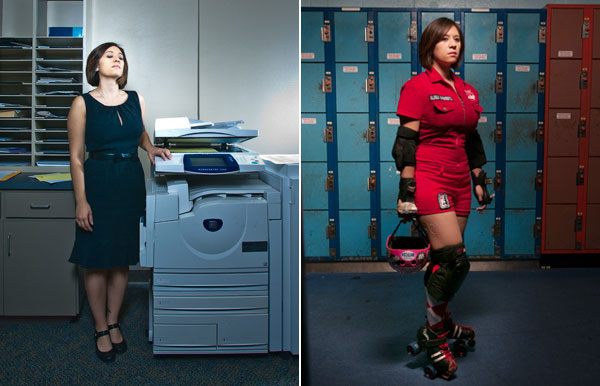 ALTAR EGO: By day, Natalie Wolc is a youth minister. By night, she’s Gloria Vanderbitch. photography by Elizabeth Lavin
photography by Elizabeth Lavin
For the next couple of years, Wolc juggled her two worlds without anyone at her job having a clue about her new passion. She lost weight, 80 pounds, not just from skating but because for the first time she began paying attention to what she ate. She loved the game and the camaraderie she felt with her derby sisters, who came from all walks of life. There were hairdressers and accountants, lawyers, a doctor, even a Harvard-educated economic forecaster, but the most common professions were schoolteachers and nurses. She also liked that roller derby made her a stronger person, not afraid to stand up for herself. She even occasionally got into fights, which got her thrown out of games. But she liked being Gloria Vanderbitch as much as she liked being Natalie Wolc, youth minister.

But then one day it all came crashing down. She got into a smashup with some other skaters during a Saturday night bout, and she dislocated a kneecap. As she was being fitted with a cast, Wolc remembered that she had to preach a sermon the next day. “Great,” she told herself. “Now how am I going to explain my leg?” She could make up something, but she didn’t want to lie.

The next morning in church, as she tried to hobble nonchalantly toward the pulpit, to her horror, she heard one of the congregation snicker and say, “So where’d you get that? Playing roller derby?”

Standing before her liberal, educated, cultured congregation, Wolc decided to tell them the truth, that at night she became Gloria Vanderbitch and played roller derby. But no matter what they might think, she said, roller derby had made her a better person. It made her stronger, more confident. Then she stepped back and waited for their reaction. What would happen? Would they send her off in disgrace?

It turned out that once the initial shock had passed, her congregation mostly didn’t care. They’d all noticed how much she’d grown, and if roller derby had been her path to change, then it was fine by them. Now she occasionally sees their faces at her bouts.

Wolc flashes a pixie grin as she offers up her ankle. On one side she has tattooed the Unitarian/Universalist flaming chalice; on the other, the winged bomb and grinning skull of the Bombshell Brigade.

Modern roller derby may have started in Austin, but one of its founders, Rachelle Moore, grew up in Coppell. Of the first two skaters who were recruited, one had a Ph.D. in genetics, and the other was a topless dancer. With them, the pattern was set. Skaters continue to hail from the alt-professions: waitresses, bartenders, hairdressers, baristas, and office temps. But they also increasingly come from white-collar professions. A good many sign up who’ve never played sports, but many also have extensive backgrounds in athletics. They come to roller derby because they’ve grown bored with soccer or basketball.

Though most sports tend to favor one or two body types, derby girls come in all sizes and shapes. There are tall ones, short ones, lithe ones, fat ones, and ones who are built like linebackers. But they all carry themselves like they’re comfortable in their own skin. Most skaters are in their 20s and 30s, but some are pushing 50.

Roller derby’s real roots are in punk, not just for its fierceness and Goth-campy joyousness but, more important, for its DIY ethos. Show up before any bout and you’ll see the girls organized into crews directing parking, setting up chairs, and organizing stations for the timekeepers, scorekeepers, and stats guys. Unlike old-time roller derby, which was done on a banked track, the modern game is played on a flat track. Therefore the biggest, most exacting task is marking and taping down the track they skate on.

The girls themselves own the game. “For the skaters, by the skaters” is their motto, with each league its own business entity. Assassination City is an LLC, though it is working on becoming a nonprofit. Any money it manages to make goes to charities benefiting women, children, and animals. Nobody gets rich in roller derby; in fact, nobody makes any money. Everyone is a dedicated amateur who knows she can count on the others to help her out. They baby-sit for each other, do errands, help each other find jobs, comfort each other in bad times. “In roller derby, you can’t be greedy,” says Shandra Simpson (aka Trigger Mortis), a veteran skater and, by day, a sales rep for RollerGirlSkates.com.

Simpson is a linebacker type who keeps her hair in a pompadour and dresses like a 1940s pinup. Normally sweet, funny, and nonconfrontational, she becomes a hard-hitting terror after she straps on her skates and makes up her face with black war paint. When Simpson saw her first bout, she was struck by how the skaters all seemed in control and their leg muscles were hyper-developed, which made them seem unbelievably sexy. But what really amazed her was that one of the skaters was even bigger and fatter than she was. She was a blocker and an extremely fast skater. Simpson told herself that if this woman could do it, so could she. The girls invited her to join, but she worried what her mother would think. When she told her, Simpson’s mother cried. Her mom let her in on a secret: she herself had dreamed of being a roller derby skater and had even planned to run away to join a team. But then she discovered she was pregnant with Simpson, and that put an end to that.

Simpson spent her first practices traveling around the edges of the rink like a baby learning to walk. At first it felt pathetic, but then the fat skater rolled up to her and said, “You know, you’re skating way better than I did when I first came here.” That was all the encouragement she needed to keep going. The derby life started working its wonders on Simpson. Her fat began to melt away, and she developed muscle, endurance, and speed. 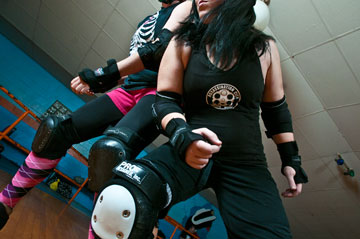 CITY OF SKATE: There are two leagues to choose from: Dallas Derby Devils in Irving and Assassination City in East Dallas. photography by Elizabeth Lavin
photography by Elizabeth Lavin
The blocker’s name was Kristin Follett (aka Castro), and everybody on the team admired her. She’d come to them weighing more than 400 pounds and unable to skate even a little. But once she had her skates on, she refused to sit down at any time during a practice. “I figured I’d paid my money, and it was my time,” Follett says. Now a svelte 150 pounds, Follett, a marketing rep for UPS, is still the one everyone looks up to—not just because of her success story but because she is the most joyous person they have ever met. All the skaters pick a jersey number that reveals something about their persona. Follett’s is 210 for when she cut her weight in half.

Victories have been hard to come by this season for Assassination City. For all their growing popularity and swelling ranks, they’ve been losing veteran skaters. Their travel team, Special Ops, for which Simpson and Follett skate, lost 10 games. Their first victory this year came only at the end of September, but it was glorious, 172–101 against the Alamo City Rollergirls. “It’s a clear sign of a turnaround,” says Ziv Kruger, their sometime mentor and coach.

So where is roller derby headed? Teams all over the country are aiming for mainstream recognition. They long to be taken seriously, perhaps even become an Olympic sport someday. (Laugh at your own peril.) A number of teams have already given up their trashy names and skate in more standard-looking team uniforms. Assassination City isn’t ready for that yet. With the homemade campy getups come a humor and camaraderie that only inspired amateurs can share. For now, all Gloria Vanderbitch, Trigger Mortis, Castro, and all the other girls can do is to keep skating and losing and winning and giving it their usual 110 percent.

Brendan McNally is the author of Germania: A Novel (Simon & Schuster, 2009). Write to [email protected]