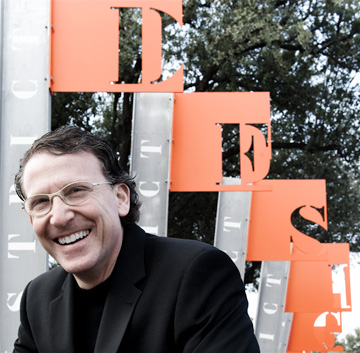 DESIGNER GENES: Ablon’s travels through Paris and Rome inspired him to build cities—or, at least, rebuild them. photography by Manny Rodriguez
photography by Manny Rodriguez
Even after all these years, the development of the industrial area just east of the Trinity River levee ranks as one of the savviest real estate deals in Dallas history. A long, skinny stretch of muddy floodplain, not even 2 square miles, it was completely unusable until the city built the levees, redirecting the river, and the federal government built Interstate 35. Nearly overnight the property went from being a wasteland to a well-connected, prime-located potential development site. The young Trammell Crow began building on it speculatively, plopping down rows of light industrial buildings and warehouses.

Crow’s takeover of the area we now call the Design District is the quintessential model of development that would become real estate orthodoxy in the United States after World War II. In this model, a developer finds an undervalued piece of land that is vacant or can be easily stripped to the dirt, lobbies for transportation or infrastructure changes that would increase its access and desirability, and then builds low-cost structures that can be flipped or leased out for a bundle. Today, the district may not look like the strip malls and subdivisions that stretch north of Dallas, encroaching on Oklahoma. But this is the laboratory that created that style of development.

Over the years the Design District morphed from a warehousing district with some light manufacturing to an eclectic mix of shops and specialty stores with a smattering of antiques dealers and art galleries. That’s how Michael Ablon found it—quaint, quirky, intriguing, and old—after moving back to Dallas in 1991. This was long before he became the face of the latest development push in Crow’s old neighborhood. He was a young engineer and architect back from school and jobs in quirky places like Austin, Boston, Philadelphia, Paris, and Rome. Ablon wanted to build cities. He studied architecture in Versailles and spent time as a poor student on self-imposed European exiles. “I wanted to study cities, and if you are going to do that the only way is to live in the streets,” Ablon says.

Life and family eventually led him back to Dallas, where he found a job with a famous local family: the Perots. He was assigned what seems like a dream job for a wannabe city builder: master planning the massive Victory development. He helped create an initial plan that tried to integrate the new into the old, envisioning a gradual transition from the remaining warehouses of the West End to the new luxury high-rises.

Plans for Victory evolved away from the original vision, and Ablon left to work for acquisition and redevelopment companies before forming his own real estate company. But he is not your typical real estate man. Ablon uses words and phrases like “backdrop,” “nurture,” and “overly scripted.” He studied architecture, but chose his graduate program because it had a strong literature component. He wanted to study, as he put it, the aestheticists, listing off authors such as Søren Kierkegaard, Charles Baudelaire, and Thomas Mann. “I don’t see buildings as amortization schedules,” Ablon says.

So if Ablon was going to run a real estate company, it would not follow the model of scrape, build, and flip. He spent too much time wandering Rome’s crooked alleyways, stumbling upon its piazzas and open-air markets. He had fallen in love with the mystique and charm of the Old World, where new developments fall in line with the old, where cities coyly reveal their history like a 19th-century Parisian woman lifting her skirt to show a knee to the men in the street.
Where is a developer like that going to find work in Dallas?

Ablon didn’t have to look very far. On the other side of Stemmons Freeway from Victory—a straight shot on Hi Line Drive—stood Crow’s old warehouse development. The area had remained exclusively a business district with no residences save the rogue live-work space, and few restaurants to speak of. But the time seemed ripe to change that. State Thomas and the West Village proved that there was a new hunger here for denser living. Ablon had found the setting for his urban experiment. He partnered with the Lionstone Group, a large equity fund comprising institutional investors, and purchased the remaining Crow family holdings, some 30 acres including 39 buildings, the Dallas Design Center and the Decorative Center, and more than 700,000 square feet of showroom space, instantly making him the largest player in the district.

===“I wanted to study cities, and if you are going to do that the only way is to live in the streets,” Ablon says.!==

There is a reason why Trammell Crow was so successful. He recognized something about the nature of real estate. Businesses see an advantage to commercial districts, which generate access, predictability, and synergy. He also saw that businesses need different things from streets than pedestrians and residents. The streets in the Design District are wide with inset parking and little, crumbling sidewalks. Crow understood real estate inertia—the power behind the Design District remaining a service/retail ghetto for nearly a half-century. There’s an easy way to beat real estate inertia: scrape and rebuild. That’s another thing he showed the world. But Michael Ablon wasn’t interested in a new urban playground. He wanted to figure out a way to preserve and enhance an existing one.

What Ablon found in the Design District were a number of factors that suggested an urban transformation could work. He saw how Oak Lawn Avenue extended under Stemmons Freeway past a new Dallas Tollway exit, a drive of mere seconds to popular Uptown. He saw Hi Line Drive lead out of the district to the south, cross under the highway and into Victory, yards from an entrance to the Katy Trail. Those two streets run right into each other, creating a crossroads near the heart of the district, steps from numerous galleries and showrooms.

“Those [streets] become the natural organizing factor,” Ablon says. “They take an area that could have been conceived as confusing, and then you organize it with a very strong cross-axis so that everyone can orient from it. People funnel into the streets.”

Yet there was still a problem: all of the lots in and around this crossroads were developed. A New Urbanist would have scraped those properties and put up brownstones or multilevel apartment buildings with ground-floor retail, creating a European-style streetscape. Ablon instead dreamed up a way to squeeze developments in behind the existing structures.

“Instead of putting buildings on the streets, you create a backdrop,” he says. “This way you’ve kept your street scale. People want to be here for an urban life, and restaurants want to be here because they have a cool, authentic neighborhood to be in. And when you go out with your wife, you go somewhere you can take a breath and feel like you’re alive.”

Ablon won’t say it, but the opposite effect is going to a place like the West Village, taking a breath, and feeling like you are on a movie set. The Design District doesn’t feel like that. In fact, driving past the intersection of Oak Lawn and Hi Line, it doesn’t feel very different at all. The streetscapes are rebuilt and replanted with attractive landscaping. There is a grassy area with a mini concrete amphitheater. Stuck in the median is a series of steel I-beams that undulate; cut-out letters spell “Design.” These infrastructure add-ons were funded in part with money from a Tax Increment Financing district, and in part from Ablon’s company. It is only behind all of this that you see the new residential developments, three large, Uptown-style apartment blocks that don’t sit on the main drag, but on Hi Line Drive, Oak Lawn Avenue, and Inspiration Drive. In all, Ablon has added around 1,000 new residential units. They look out on a grassy median that has been rebuilt as the entrance to the Trinity Strand Trail, which will eventually follow the old Trinity River bed and connect through to the Trinity River Project.

“It’s not trying to over-graph on top of it a foreign footprint,” Ablon says. “You don’t hear me saying ‘mixed-use,’ or ‘live, work, play.’ It’s a question of what’s here and what is important. It is the little things. Keep them. Nurture them.”

===“Ablon got off to a bad start when we read the [Dallas Morning News] article that said he was going to call it Lower Oak Lawn,” says Kay Agnew, a restaurant pioneer in the district who runs Margaux’s. “It created a huge rift with people who spent years branding the area as the Design District.”!==

Though Ablon says he doesn’t want to impose new urban ideas on the Design District, he has imposed new ideological ones. One misstep, according to some, was branding his new development Lower Oak Lawn, or LOL for short. Co-opting the language of texting and instant messaging made sense for Ablon’s target tenants (he doesn’t balk at the word “gentrification”).

“Ablon got off to a bad start when we read the [Dallas Morning News] article that said he was going to call it Lower Oak Lawn,” says Kay Agnew, a restaurant pioneer in the district who runs Margaux’s. “It created a huge rift with people who spent years branding the area as the Design District.”

Today Ablon backs away from LOL, but is quick with a high-brow defense for targeting residents with the phrase. “It’s part of what I love about postmodernism: it integrates current culture and classicism.”

Stakeholders had good reason to be wary. Although Ablon isn’t the only developer active in the Design District (Jim Lake, for example, owns a lot of real estate and built the Trinity Loft multiuse development between Dragon and Slocum Streets), Ablon’s parcel is the most significant, consolidated, and prominent. In addition to the undoing of years of branding, it was feared that bringing in consumer-style retail would negatively affect trade-only and high-end businesses by creating a stigma. National chains—restaurants and retailers—might spoil the Design District brand and push them out. Then there is the assumption about what development here usually means: scrape and rebuild. Nothing has helped Ablon’s reputation more than time.

“He’s done a really good job at looking at the overall picture,” says Shannon Wynne, who opened his latest restaurant, The Meddlesome Moth, in March on Oak Lawn. “I don’t agree with everything—the signage I’m not crazy about—but they did a lot of good things they didn’t have to do.”

Most business owners in the Design District say they are happy to see restaurants come to the area, helping them entertain clients, and are pleased that Ablon is taking a ‘no-nationals’ attitude toward targeting potential tenants. But residents add something intangible, says Craighead Green Gallery owner Kenneth Craighead.

“What is so interesting is that I used to leave the gallery at 5:30 or 6 and it was like a ghost town,” Craighead says. “Now there are people out walking their dogs; cars are coming westbound down Oak Lawn. Just to see this much interest in the area is a thrill.”

For Ablon, “thrill” may be an understatement. If he achieves his vision, he will have proven it is possible to do true in-fill redevelopment in Dallas—new development that accentuates what is already there. It may not look or work like Paris or Rome, which is fine. The Design District looks like the Design District. It’s not an urban utopia. But it is learning to build with—and not over—the urban past we have.