The moment I step inside Whatchamacallit, my heart races at the enormity of the task at hand. A few paces behind me trails exchange student Miss Ye Jin Chung, of South Korea by way of China. Ye Jin was invited to the J.J. Pearce High School prom. My sweet little exchange student is usually shy and reserved. For weeks, all she could say was, “I so happy. I go to American prom party!” We need a dress.

Whatchamacallit is prom headquarters, the center of the Prom Universe. As far as the eye can see stand racks of dresses in every color and combination imaginable: short, long, sleek, puffy, beaded, sequined, strapless, halter, tasteful, and tacky. I can barely squeeze through the glorious, overwhelming display. Overhead, loud dance music thumps. Teenage girls, their mothers, and the occasional father or boyfriend ramble through the chaos seeking what Ye Jin seeks: the perfect dress.

For girls, it is the dress that punctuates their adolescence. Thousands of years from now, anthropologists will study Western Civilization through the lens of this cultural ritual. No doubt Whatchamacallit will be the epicenter of the research.

Prom is a rite of passage. At least, I assume it is. I didn’t have a prom. I went to a Baptist high school. We, the students of First Baptist Academy, had a rubber chicken banquet dinner. I was damaged as a result. Just the mere mention of the word “prom” causes me anxiety. For the past 20 years, I have internalized movies as my own prom experience. I could only understand this sacred ritual through an odd mental amalgam of scenes from Pretty in Pink, Footloose, and, sadly, Carrie. I find it difficult to grasp the emotions behind the hubbub in Whatchamacallit.

Ye Jin wanders through the maze of racks, selecting size 2 gowns in shades of pink. Brenda McCoy, a childhood friend of mine, is now the vice president of marketing at Whatchamacallit. Brenda went to public school, and she had a prom. Brenda zips, cinches, hooks, laces, and adjusts each dress Ye Jin tries on. I am of no use whatsoever.

This gives me time to wallow in my promless melancholy. I remember marching into the principal’s office in my senior year, citing the aforementioned movies as my supporting documentation, and demanding a prom. I weigh the prospects of chopping up a vintage dress and teaching Ye Jin to sprint tearfully toward her date in the foyer of the prom, a la Molly Ringwald. With the language barrier, this would be difficult to translate.

My daydreaming is interrupted by a male voice over the store’s PA system: “The next five people to pay for part of their prom dress with a $2 bill get a 20-percent discount.” Brenda rolls her eyes and says, “Here we go.” These interruptions over the PA system are a regular occurrence at Whatchamacallit. “He’s part wedding DJ, part MC,” Brenda says.

I have no idea to whom the voice belongs, but I frantically begin rooting through my handbag and wallet for a $2 bill. Brenda eyes the pile of crumpled receipts and expired coupons. She leans in and quietly says, “Don’t worry. He’ll do it again in a minute.”

This is going to take awhile, so I decide to wander around. Along the walls hang portraits of beauty queens, smiling girls decked out in dresses secured at Whatchamacallit. Near the front counter, a group of dads sits in a lounge, watching sports. One calls out to his wife and daughter: “Come get me when you need the credit card.” 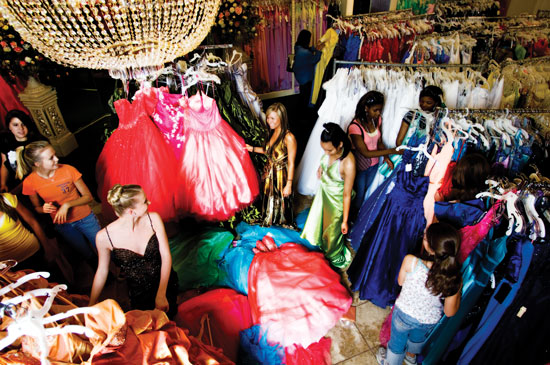 DRESS CODE: At Whatchamacallit, girls have gotten into fights over that perfect frock. photography by Elizabeth Lavin
photography by Elizabeth Lavin
Through my wanderings and questionings, I find out that the voice on the intercom belongs to Bill Danches, the owner and creator of Whatchamacallit. A Miami native, “Mr. D” or “Papa D,” as he is known by his loyal customers, is all about the bling. The 60-year-old wears wide, gold, crystal-encrusted glasses and a rhinestone Kippys belt. Like all eccentrics, he has a story.

Danches sold his Florida retail chain in the early ’80s and retired. After a few months, boredom set in, and he searched for a new challenge. He chose Dallas.

Whatchamacallit started in 1984 in a tiny space adjacent to a Kroger in far North Dallas. His second year in business, he had two racks of dresses. The next year, his opening wholesale order was $125,000. Danches spent 12 years in various spaces at the corner of Preston and Campbell. Each time he moved, he tripled inventory.

In 2006, Whatchamacallit moved to the corner of Preston and Belt Line, into 20,000 square feet filled with all things prom. He needs the space not only for his merchandise, but also to house his hordes of customers. At the height of prom-shopping season, during my first visit in early March, Whatchamacallit has more than 80,000 dresses. The average price of a prom dress hovers around $500, but they range from $100 to $5,000.

“You see some wild things in here,” Danches says. “Girls and their mothers fighting over a dress when they see a girl at their school trying on the same dress. If you want exclusive, let me show you something.”

Danches approaches a rack in the middle of the mayhem and pulls out a gorgeous gown, silk, with Swarovski crystals that dance around the plunging neckline. “This,” he assures me, “is one of a kind. This dress, you can see from a mile away. It’s $2,500.” Danches also personally selects each item. One longtime employee says, “He just has a knack. He knows what looks good. He keeps up on fashion. He knows what women want to wear.”

It’s a business worth knowing. At the peak of spring prom season, Danches sells more than 600 dresses a day. The average amount spent on prom is anywhere from $600 to $1,000, depending on your source (in this case, Your Prom magazine and PromSpot.com, respectively). All this contributes to the estimated $4 billion industry that is the high school prom.

Danches has his detractors, online and elsewhere, saying he can be a jerk. Danches shrugs it off. “I try hard to make everyone happy,” he says. Victor Hicks, a former football player, is the security guard. Hicks takes on his boss’s critics. “Mr. D expects the ladies in this store to act like ladies,” he says. Hicks, almost 7 feet tall, easily 375 pounds, perches at a dainty ornate writing desk near the entrance. As girls file past, his enormous hands point to the desk. The girls release their Starbucks and Sonic cups under his watchful eye. No food or drink is allowed near the merchandise. Hicks discourages catfights and shoplifters.

Most of the complaints about Danches center on the store’s “no return” policy. This prevents customers from wearing and returning dresses. “I sell new, not used, clothing,” Danches says. “Girls come in every year. After they bought a dress, their date dumped them. They cry. I feel terrible. I can’t take the dress back. I just can’t. I tell them to go to the dance with friends or stag.” He shrugs, surveys his store for confirmation, and continues: “Living well is the best revenge.”

That might sound callous, true. But Danches gives away at least 1,000 dresses a year to deserving girls. Last year, more than 600 dresses were awarded to girls who signed a pledge of prom sobriety. And his employees say Danches is humble. They tell stories: a girl orphaned, accompanied by her grandmother, with only $50 to buy a dress leaves Whatchamacallit with a dress worth 10 times that, shoes, and jewelry. Another girl weeps at the counter. She didn’t realize the dress of her dreams was so expensive. Danches chats with the mother. “She was a good kid,” he says. In the end, he sold the dress at a loss. “I can’t stand to see them cry,” he whispers.

The intercom Danches uses replaced a bullhorn. Customers and staff hated the bullhorn, but it was necessary, according to Danches. He barks out messages to his employees during the pandemonium. His primary function is to keep things moving. In the new store, he has a PA system with a killer sound system. It feels sort of prom-ish as the music thumps and girls mouth the words to their favorite tunes. Danches orchestrates a unique method of crowd control, using his game show-style contests announced over the intercom. They sprang from a shortage of dressing rooms. “I do it to entertain. And to get decisions made and to clear the rooms,” he says, chuckling. He has 36 dressing rooms. During prom season, even that isn’t enough.

The exquisite dresses are in good company with Danches’ sportswear and bridal collections. He carries exclusive lines such as Claude Montana, Kippys, Hybris, and Oppio. A pair of hand-painted or studded jeans could sell for as much as $2,000 at Whatchamacallit. Danches demurs when asked, but finally admits, “I dress a good portion of the socialites at Cattle Baron’s, and I dress the most beautiful women in Dallas.” When pressed, he ticks off the names, names you would know, singers, actresses, models, and the wives of Dallas Cowboys past and present. “I offer service,” he says, “and if a Dallas Cowboy wants to come in with his wife, I have a VIP lounge for him to relax in.”

Brenda and Ye Jin are finally done. They are down to a decision between two dresses. Danches’ voice comes over the PA: “The next five dresses at the counter get a discount.” Brenda closes the deal, and I sprint to the cash register. In line, another mother, our next-door neighbor in the fitting rooms, taps my arm and says, “I wish my daughter would pick a dress like that.” She points to Ye Jin’s selection. Her daughter chose a slinky little low-cut number with a slit that leaves little to the imagination. She tells Ye Jin, “You look like a princess.”

Pretty in pink, no translation needed.