In work and in life, Cobie Russell isn’t one to seek perfection. The classically trained artist—who grew up on a college campus in Upstate New York with her mother, an artist and musician, and father, an art-appreciating economist and professor—is much more interested in reality, flaws and all, and the energy that pieces and spaces convey. “It’s an interesting house,” she says of the Highland Park home she’s shared with her husband, Gordon, since 1985. “There’s a lot of vitality in it. There’s a lot going on. It’s quiet, but it’s not still.” Now empty nesters with two adult children, the Russells owe much of that vitality to the “fluctuating number of dogs” in the home, including a new German Shepherd puppy they brought home in January. 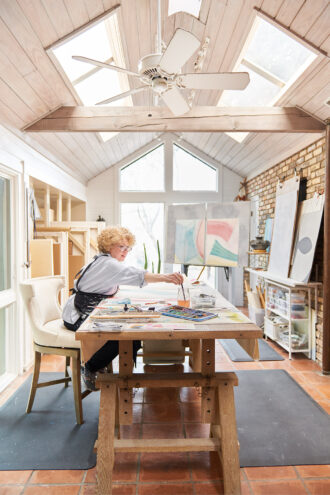 The dry studio, which looks out the front of the house, gets north, west, east, and overhead light—ideal working conditions for an artist.
Elizabeth Lavin

The flooring in much of the home is San Antonio tile, a favorite of Russell’s for its beauty, durability, and ease of care. The pieces atop the Jacobean desk are works in progress, though she generally doesn’t display her own pieces permanently.
Elizabeth Lavin

“I forgot what it’s like to have a puppy!” she laughs. But Russell’s large-scale art—painted and drawn works that explore light and shadow—contribute their own visual energy across much of the house. Her studio space, office, and canvas storage have grown to encompass nearly 2,000 square feet, practically the entire second story, along with a downstairs workspace in the sunroom. The Russells wouldn’t have it any other way. “I think art has something to do with arresting your attention in the midst of distraction,” she says. “And it’s important for a person’s home to be a place where you can become centered and calm, and move the distractions away, and really focus on the beauty of life.”