Stepping into designer Joe Minton’s Fort Worth home is like stepping back in time.

The house is just as much a reflection of his life experiences as it is a study in French, English, Italian, and Chinese antiques. “I wanted a traditional house—like an English country house or cottage,” Minton says. Indeed, the study just off the main entry might make you feel like you’ve peeked into the home of William Morris, the famous Victorian textile designer.

“I like to mix different periods, styles, countries—I don’t want a room that is exactly as it was 300 years ago.”

Lee Jofa handblocked linen adorns the wall, curtains, and a chair and blends well with the pine paneling. Wood beams add a storybook touch to the ceiling. A leather sofa lends a clubby feel to the space. Staffordshire figurines prance along the mantel. An imposing portrait hangs above the fireplace. (Though, Minton admits, “I have no idea who he is.”)

Perhaps this cottage feel is due to the fact that Minton served in England for two years during the Cold War as an Air Force lieutenant. During one fateful flight back to the United States, he sat next to Dallas antique dealer Rose Driver, and the rest is (quite literally) history. “She had a fabulous shop on Sale Street,” he says. “I sat next to her for several hours on the plane, and she encouraged me to start buying antiques when I went back to England, which was going to be in two weeks.” The guest house is ready for holiday visitors with a custom-made Italian iron bed and crewel fabric on the bed, walls, and lamp shade. Above the nightstand, 16th-century English maps nod to Minton’s time in the Air Force. “Those maps are the two counties where I was in England,” he says.
Cody Ulrich

But it would be a few more decades before he started buying as a designer. Today, Minton has an antique shop—Joseph Minton Antiques—on Slocum Street in Dallas and a design firm on White Settlement Road in Fort Worth. He divides his time between the two cities equally and has a house in each.

“I copied the paneling in this room from the Hunter House in Newport, Rhode Island.”

Yet even as an experienced antique collector and keen designer, he knows better than to go for just one look. “I like to mix different periods, styles, countries—I don’t want a room that is exactly as it was 300 years ago,” he says. Minton has traveled all over the world—from London to Istanbul, Delhi to Dubai—to achieve the right blend of influences and time periods.

Apart from the years of collecting, the house also needed structural work. Built by John and Mary Lou Paxton (parents of late actor Bill Paxton) in the 1950s, the home was outfitted in mahogany from the Frank Paxton Lumber Company. Minton kept the floors, but changed just about everything else. In the entry, he took out closets to make the hall wider, raised the ceiling, and added a cupola to bring in natural light.

The bedroom, straight back from the hall, was once the living room. Again, he raised the ceiling and added transom windows. Lee Jofa “Tree of Life” fabric pools from floor to ceiling and covers the sofa. Minton particularly loves his red lacquered secretary and the 17th-century tortoise and ebony cabinet he nabbed from an MGM auction. He also transformed the original master bedroom into one massive closet/bath/dressing room. “I wanted this house to be like an expensive hotel suite just for me,” he says. 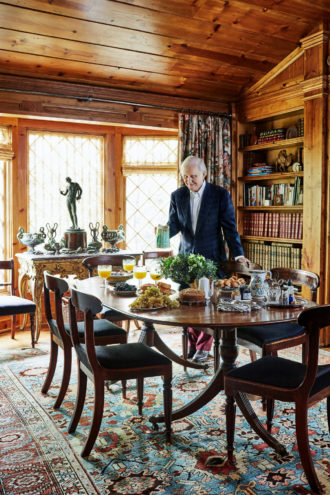 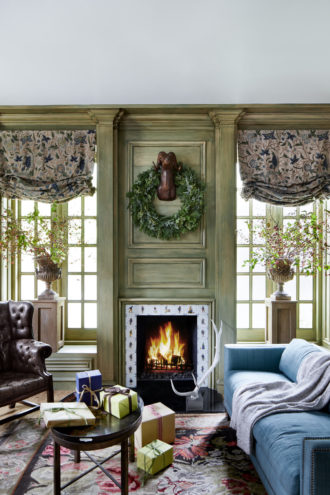 But perhaps the coziest space of all is his hybrid dining room/library, where he enjoys entertaining for the holidays and dinner parties alike. “These windows came from my grandparents’ house,” Minton recalls. “I remember as a child the sun coming through these windows onto an Oriental rug in my grandparents’ house, and now I’ve got the same thing.” True to an English gentleman, the room has hints of a botanist’s study, with bronze Japanese animal figures and Palissy plates covered in fish, frogs, and lizards. Minton calls them his “creepy-crawlies.”

“I wanted this house to be like an expensive hotel suite just for me.”

Just when the home seems like it can’t get any more charming, an enchanting guesthouse sits behind a terrace and arbor Minton designed. (He transformed it from the original garage). Sage green walls and crewel embroidered wool cover the bedroom. “I copied the paneling in this room from the Hunter House in Newport, Rhode Island, which was an 18th-century sea captain’s house,” Minton adds. Delft tiles salvaged from the Schoellkopf house in Dallas border the fireplace. English maps, a custom iron bed from Italy, and a comfortably worn leather wingback all stand ready to make guests feel at home for the holidays.

All in all, what started as a hobby—Minton holds a law degree from SMU and was the vice president of a Fort Worth bank before changing careers—has served him well. With two homes full of antiques and two successful companies under his belt, Minton has a lot to be proud of. But ultimately, what he loves is the feeling the home evokes. “It’s a comfortable, cozy house,” he says.