How a family came together to create an empty-nester couple’s paradise.
By Rob Brinkley | May 12, 2017|10:00 am
View Gallery
View Gallery

Emily Post would have been happy here. The gatekeeper of good taste—she authored many books on etiquette and wrote a popular column on sophistication—would have appreciated the refinement of the place, a graceful one-story townhouse by a glistening lake in North Dallas. Outside, it has the air of a modernist little château, built in the 1980s of St. Joe brick under a squat mansard roof. Inside? Pale blues, pale greens, and gracious spaces galore. Nothing screams. Rooms are rightly scaled and aligned with each other just so. The formal dining room is used with frequency. It’s so genteel.

Homeowners Tamra and Jesse Heath knew whom to call when they moved here: their son, an architect, and his husband, an interior designer. Daniel Heath works for classicist architect Larry Boerder. Josh Pickering works for himself, as the principal of Pickering House. The couple is back in Dallas after several years in New York, where Heath worked for Peter Pennoyer Architects, also a classicist firm, and where Pickering designed

for Bunny Williams, one of the country’s most revered traditional decorators. For being young men, the two are clearly older souls: Heath draws and paints classical scenes and buildings; Pickering’s Instagram account, @joshuappickering, is peppered with pediments, columns, and carvings. Their own Turtle Creek digs? Antiqued-mirror walls and travertine—not the usual way to go in a midcentury high-rise. “We both like a classical space,” says the soft-spoken Pickering, “but an edited classical space.”

For Heath’s parents’ townhouse, that was precisely the plan. The Heaths were gifted the home from Tamra’s father, Dallas architect Jack Wood, who worked for greats Howard Meyer and George Dahl before striking out on his own. It was Wood who developed the enclave where the Heaths live today:
Willowgate, 10 leafy acres with almost 30 low-slung townhouses, arranged around four small lakes. (See sidebar on page 91.) The Heaths moved to their intimate, two-bedroom abode from a five-bedroom house with some challenges in tow: making the 1984 house work for today, paring down their possessions, and “mixing two generations of furniture with the new,” Jesse says of his and Tamra’s own things plus pieces from Tamra’s parents. While their son went to work on the shell—carving new spaces from old, creating better flow, adding dashes of formality and symmetry—their son-in-law went to work on the decoration. Pickering enlivened the couple’s quietly traditional furnishings with “a little French Deco here and there.”

Exhibit A: In the living room, he pulled a plump sofa and chairs up to a delicately scaled French coffee table that he got from an apartment in tony Sutton Place in New York. He also reimagined favorite pieces. In the dining room, he had floral linen slipcovers made for a set of cherished cane-back chairs. In the clubby den, he lined an inherited hutch with dark-orange suede, a nod to Jesse’s alma mater, the University of Texas at Austin. Upgrades abound in the structure, too, from the installation of elegant, bronze-finish windows from England to the living room’s solid marble fireplace mantel from the famous Plaza Hotel. Pickering says he and his partner had a mantra for the project, their first collaboration: “Up the quality, down the size.” That went for the new kitchen, too, kept cozy rather than large. Pickering likes that it makes his parents-in-law eat virtually every meal in the dining room, where some of their son’s watercolor works hang and a beloved chandelier original to the house dangles overhead. Says the old soul, all of 28: “It’s just more civilized.” 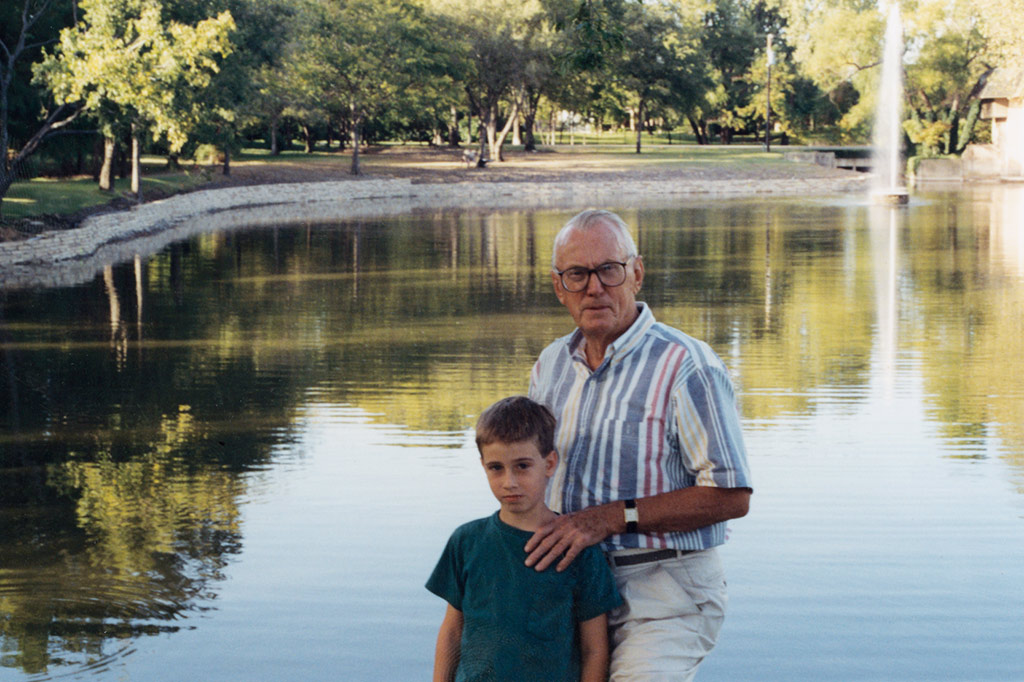 The soundtrack of traffic plays all day. Ambulance sirens wail. But a few turns away from two of North Dallas’ busiest boulevards—Hillcrest Avenue and Forest Lane, near bustling Medical City—lands one in Willowgate, an idyll of chic, one-story townhouses zigzagged around four little lakes. Expansive green lawns host mature trees and a veritable wildlife documentary comes to life: ducks, rabbits, and squirrels. While just blocks away car horns can blare, the only things honking here are the geese. (Hundreds of them, at certain times of the year.)

Willowgate is the pride and joy of the late architect Jack Wood, who earned his master’s degree from the prestigious Cranbrook Academy of Art in Michigan, where he studied with Eliel Saarinen. Wood would eventually work for Dallas A-listers Howard Meyer and George Dahl—he once turned down working with Frank Lloyd Wright because he didn’t like the farm chores that came with the job—before opening his own firms, designing prominent banks and other projects. On what used to be 10 acres of weeds and cottonwood trees, Wood developed Willowgate over 20 years, from 1972 to 1996. He designed most of the 27 dwellings himself, living in four of them with his wife of 66 years, Marjorie. There is a certain modernity to Willowgate’s residences (“My parents were midcentury,” says daughter Tamra Heath) in their long, low lines and generous windows, but there is warmth, too, in their brown bricks, arched entry canopies and shingled mansard roofs. Wood saw them as sophisticated places for empty-nesters and retirees, hence few had more than two bedrooms. Copycat communities sprang up nearby, but none have the rightness of Wood’s tranquil Willowgate. Says his son-in-law Jesse Heath, who lives in a Wood townhouse now: “He had real vision.”