The TV personality teamed up with design pal Ken Blasingame for a curated and personalized space.
By Connie Dufner | January 11, 2017|9:00 am
View Gallery
View Gallery

The walls were pristine—just the right shade of white, carefully selected by the previous homeowner.

To most interior designers and art-loving clients, keeping the walls as is would have been a no-brainer—the better to show off curated collections. But not to Jane McGarry.

“I was like, ‘white?’” says the color-obsessed WFAA-TV personality and longtime anchorwoman. It was August 2015, and she had recently moved to Dallas to co-host “Good Morning Texas” (“GMT”) and continue her “Texas Legends” role with the station. Her Fort Worth home had unabashedly bold walls—mustard yellow, terra cotta, and even a lime green door. She wasn’t buying white.

“Pink is a neutral when Jane uses it,’’ explains Ken Blasingame, the Fort Worth designer who has worked on four homes with McGarry since the early ’90s. Coincidentally, Blasingame knew the previous owner, a former boss at the downtown Neiman Marcus, where he worked in the display department in his early days. He trusted his taste. The spacious condo was ideally located “behind the pink wall”—the area north of a curvy brick wall along Northwest Highway. Dallasites of a certain age will remember it as a ’50s and ’60s haven for luxury apartments. With plenty of living space to showcase her art and antiques, big bedrooms with essentially unheard of closet space for a home built in the ’60s, and an intact, sunken marble tub, McGarry recognized the potential and yielded to Blasingame’s coaxing to keep the white walls.

Behind the pink wall it may be, but there is nothing about the apartment that takes a backseat. Especially the pink. Cue the full-frontal, brilliant hot pink velvet tufted sofa designed by Blasingame. It’s just glamorous enough to fit in with both European antiques, such as a 17th-century Spanish mirror, and modern art, like an Ellsworth Kelly or a Donald Sultan series of floral prints. “It’s tufted to the floor, which gives it a contemporary classic feel,” Blasingame says. “Jane had a collection of antiques. Adding modern pieces played a vital role in transitioning to this space.” Pink cotton drapery fabric frames the view to a swanky courtyard and pool. They make a return appearance in the family room, blending with early 20th-century turquoise leather armchairs and green camelback sofas with pink Moroccan pillows that McGarry found in Blasingame’s own home. “I go shopping in Ken’s home all the time,” she confesses. “I think my common thread is that I like things that are tactile: handmade looking and feeling.”

“Jane had a collection of antiques. Adding modern pieces played a vital role in transitioning to this space..”

The kitchen is one spot where white still prevails—in Carrera marble countertops and white leather stools where McGarry coordinates her work at “GMT.” The only structural work in the condo was pushing out the wall from the family room to the kitchen. Mirrored tile backsplashes add a touch of Hollywood Regency that plays well with her Mexican pottery collection and the strong pink and turquoise accents in the adjoining rooms.

She likens her home to a New York or Paris apartment, cosmopolitan and filled with things she loves. “Ken makes homes that look like the people who live there,” she says.

In the dining room, McGarry kept her massive 19th-century Italian table but replaced formal dining chairs with two 18th-century Majorca chairs and now keeps the table as a display for design books. It’s a reading room most of the time and transforms into a dining room with chiavari chairs when she entertains. A Robert Rauschenberg lithograph created for a 1977 exhibit commands the wall. (Look familiar? An identical poster is in Frasier’s TV apartment.)

In keeping with the ebullient homeowner’s pink-is-the-new-beige mentality, the two bedrooms repeat the boldness of the rest of the home. No soothing charcoal or cream here. Cheetah-print carpet from Blackstone Carpets of Dallas grounds both rooms. “Cheetah is a neutral for Jane,” offers Blasingame. (Sound familiar?) In the master bedroom, Blasingame designed the custom-fabric headboard with a complementary cotton print from Duralee. The end tables are draped in Brunschwig & Fils silk damask. An 18th-century table lined with photos, and a 1950s leather-covered bench by Nick Brock completes the bed. Here again, contemporary pieces mix with treasured antiques for a room that is comfortable, stylish, and utterly individual. 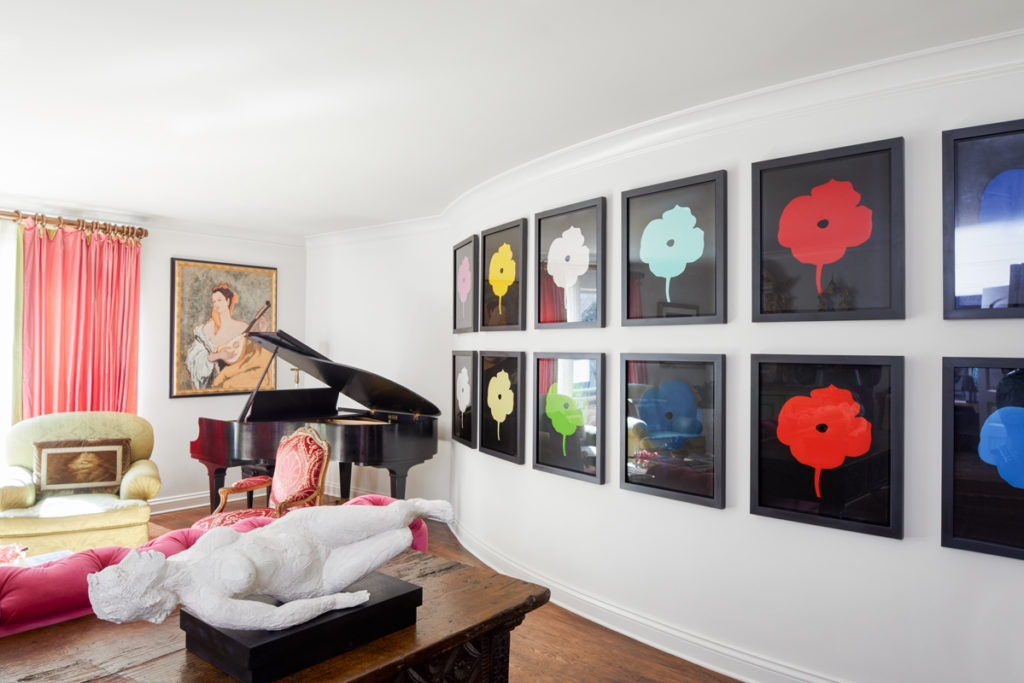 At its heart, McGarry’s home is grounded and livable: a must for the busy anchorwoman. It’s also spiffy enough to show off on a surprise visit from former first lady Laura Bush, another celebrity client of the designer. Last fall, McGarry was out running errands and casually dressed when she got a call from Blasingame, who said he wanted to come over to check on something. “I pull up to the house and Ken is jumping out of the car with Mrs. Bush and two Secret Service men. She loves houses, and Ken wanted to show her mine.” The homeowner, who has interviewed both Laura and President Bush, quickly recovered with her usual aplomb.

McGarry’s just-the-way-she-wants-it condo is not unlike her on-screen personality—exuberant, accessible, and fearless about bending the rules now and then. Or in her case, rewriting those rules to include her own definition of a neutral territory.