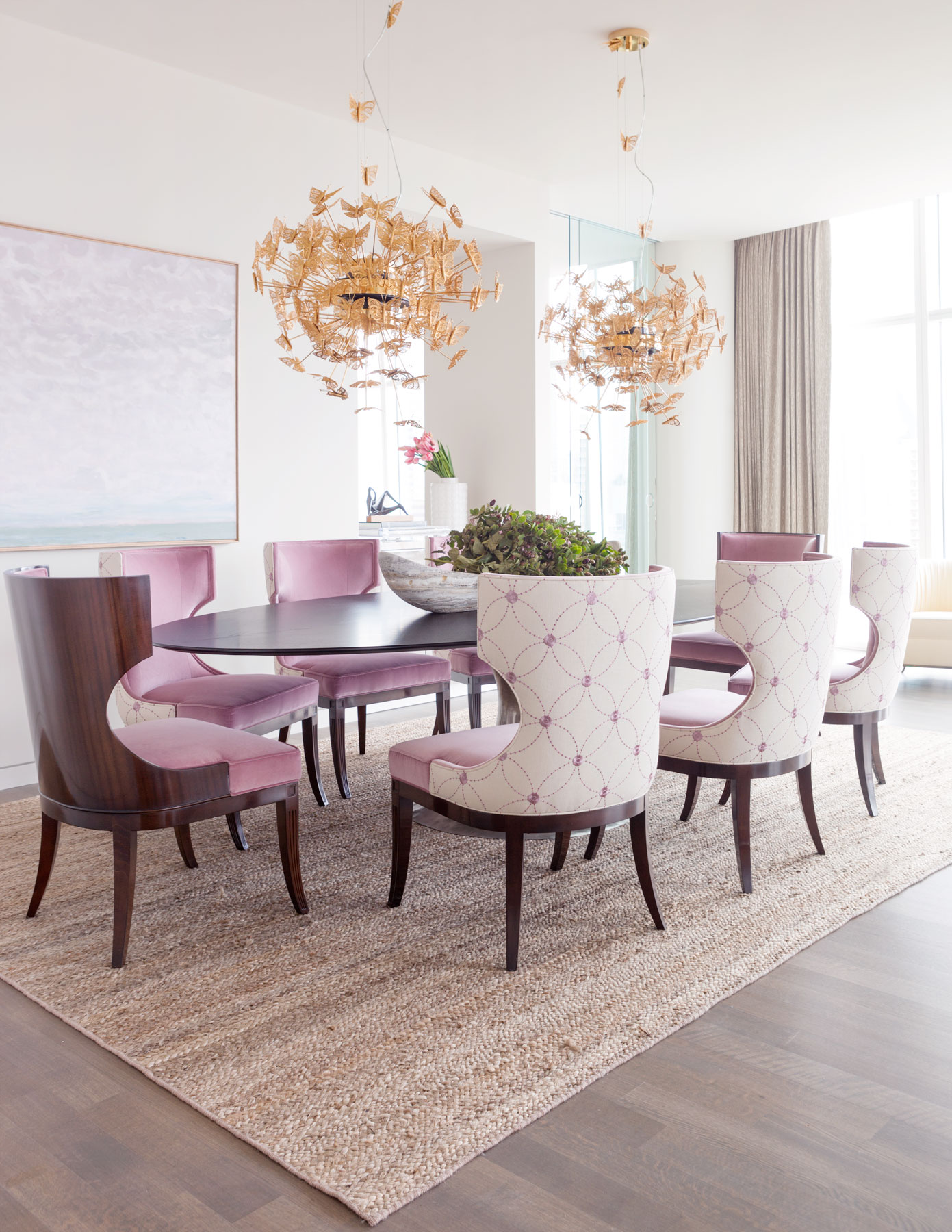 The dining room is full of feminine touches like the Koket chandeliers and dining chairs from Baker. The Julian Chichester dining table is from Laura Lee Clark, the rug is from Truett Fine Carpets & Rugs, the calcite-and-onyx trough is by Brenda Houston, and the artwork is by Jane Wilson. Photography by Nathan Schroder
Photography by Nathan Schroder
High above the Arts District, on an upper floor of Museum Tower, there is perhaps one of the most lady-like spaces in the city.

But it didn’t start that way. When a client decided to relocate to Dallas from California, she called on the services of designer Laura Lee Clark Falconer and project manager Lindsay Cobb. “We walked through the unit, and I remember being really excited to work on something in Museum Tower,” Laura Lee remembers. “[The owner] was walking us through and commenting on cosmetic changes she wanted to make. Certain areas weren’t exciting enough. It was neutral and a blank slate. She wanted to make some changes to customize it in addition to furnishing the whole thing; she wanted to make it her own.”

That meant creating something very feminine and warm. “She wanted it to reflect her personality. She’s a single woman, and she could do what she wanted to do—she didn’t have any rules. She’s friendly with lots of good energy,” Laura Lee says. “She’s such a lady. She’s refined, gracious, soft spoken, and sincere.”

“You’re mesmerized by the views here. It’s like watching a movie.”

So with all those traits in mind, the team got to work transforming a plain space into something pretty. The focus began in the entry. Laura Lee toured some of the other units in Museum Tower and saw how different tenants personalized the space where the elevator transports people in and out. After seeing one unit in particular where the owners opted to completely open the space to the home, she says she was inspired to create something somewhat open and very special. “Why would you want to get off the elevator into a dark hallway when you can get off and have the immediate impact that this is a special place to be?” she asks.

Convincing the homeowner was a bit of a challenge, however. She was concerned about security. But after speaking to family and friends, she decided to go for it. “We wanted something that leads you in and you know you landed somewhere special,” Laura Lee says. The designer looked to some of the inspiration pictures that the homeowner collected and then set about designing the open, geometric-patterned wall that greets people when they exit the elevator. “We took the opportunity to use it as a design element to set the tone [for the entire apartment],” she says. 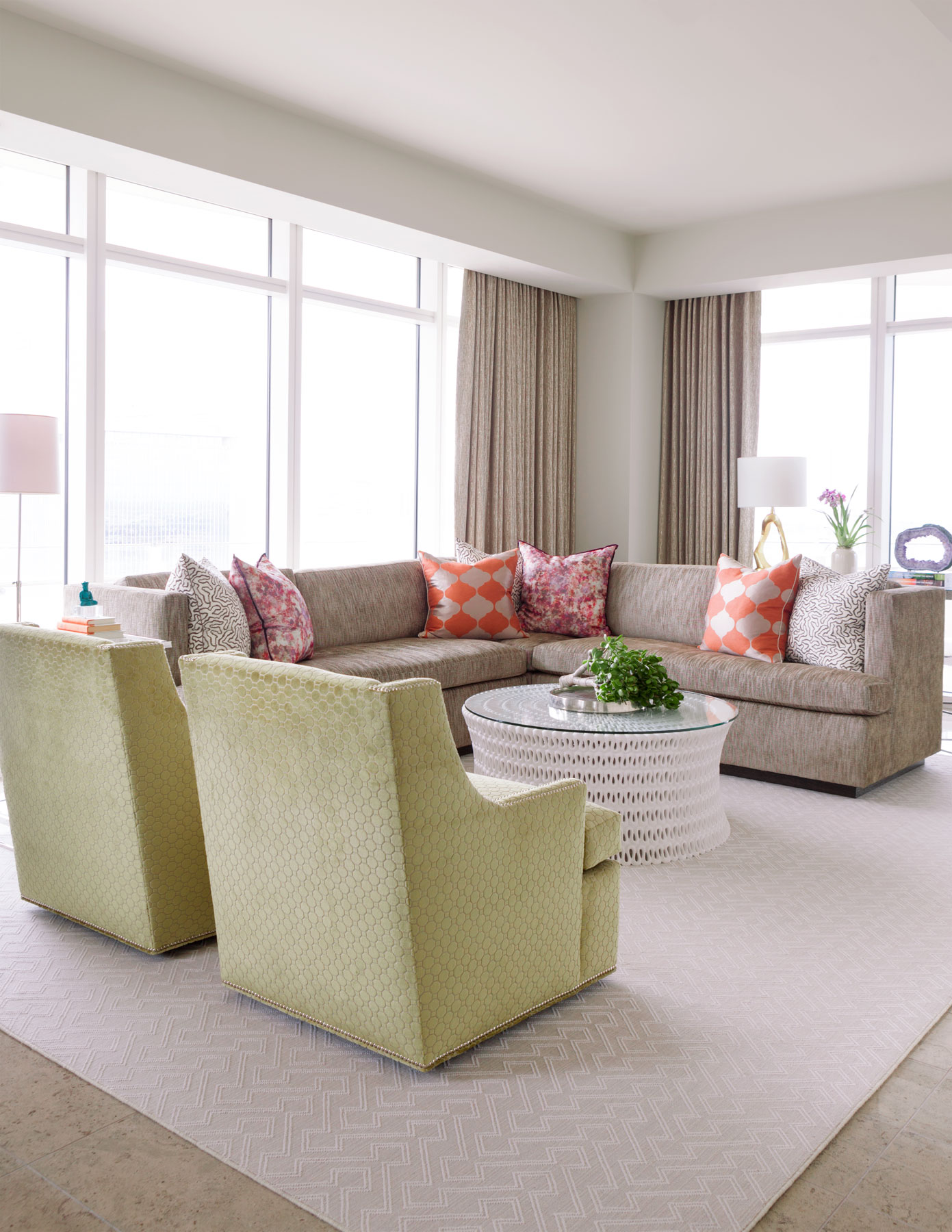 From the beginning, the client had her heart set on a fireplace, but Laura Lee wasn’t sure that would be doable. After checking with contractor Austin Arnold of KPA Group, they were assured that anything was possible. So the fireplace was added to the other side of the entry wall. “A lot of things happen right there. We gave the entry something interesting, and then when you walk around, it serves another purpose—it’s where the fireplace is. Up there, you don’t have anything to focus on except the views. But the fireplace added a lot of warmth. [The homeowner] wanted the place to be inviting,” Laura Lee says.

When designing for a high-rise apartment, designers have to make sure that everything fits in the service elevator, through the tight corridors, and past the doorways.

The remainder of the construction happened in the bathrooms and the kitchen, which was originally quite dark, masculine, and bland. The homeowner found it less than functional, being a woman who loves to cook and entertain. “She entertains the right way,” Laura Lee says. “She wanted the kitchen to be more exciting.” So it was out with the old and in with a brand-new, glamorous-yet-functional Poggenpohl kitchen. She opted for satin glass on the upper cabinets—Laura Lee says they look iridescent and the appearance changes depending on the sunlight. They also added a waterfall island with a Dolce Vita natural quartzite counter. The result is a very light, feminine room that complements the adjoining den.

In addition to the renovation work, Laura Lee and Lindsay were also working on furnishing the entire apartment. Though this could have proved challenging as the homeowner was still living in California at the time, Laura Lee and Lindsay say the client was extremely trusting of their choices. She came back two or three times during the year-long project, but Lindsay says they mostly communicated via phone calls, emails, and digital boards. “We had lots of things to show her, and we narrowed it down based on what she reacted to. We took her to see chairs and things like that in-person, but a lot she didn’t need to see,” Lindsay says.

“[The homeowner] is a single woman, and she could do what she wanted to do—she didn’t have any rules.”

Still, the long distance didn’t slow down the process. “She was very decisive,” Laura Lee says.

Artwork was also chosen specifically for the apartment, and the homeowner was very hands-on in the acquisition process. She worked with art consultant Lisa Brown to select pieces for her new abode. “Lisa told her where to go in New York, and she walked in and fell in love with pieces that ended up being flawless in her space,” Laura Lee says.  “It adds a whole other layer.”

In December 2014, once the renovation was complete, the artwork was hung, and the furniture was in place, it was at last time for the homeowner to see the finished results. Laura Lee says it really was a big-reveal moment. “We all cried—tears of joy,” she says. “She had a feel for it. She had made all the decisions, but she couldn’t put it all together in her head. She was beyond thrilled.”