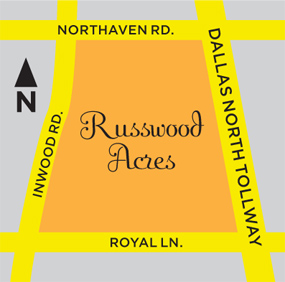 This treed quadrant of sprawling lawns in North Dallas has the feel of a gated community. Developed in 1962 by Harold Clark and Bill Smith just as Dallas was populating north, the partners were committed to generous home sites and quality construction. Most home sites here are approximately half an acre, and the cul-de-sac lots are even larger. From the beginning, Russwood Acres was intended to be understated but high-end. The minimum home size was deeded as 3,400 square feet.

“There’s no through traffic, so you get a gated feel without the gates,” Virginia Cook agent Kathleen Johnson says. She’s lived in Russwood since 1987. The location is also hard to beat. “It’s an intimate neighborhood with a small-time feel in a big city, and you are minutes from the private schools,” says longtime Russwood resident Maloree Banks.

Population: 229 homes
Home Styles: You’ll find original 1960s ranches, most built on pier and beam, and almost all have four to five bedrooms. There are very few tear-downs, and the few two-story homes were built on lots after homes burned. Most homes have been remodeled.
Average Home Price: $182 to $226 per square foot. Two residences on Pebblebrook Drive sold in the $900s, and one went for well over $1 million. There are nine homes on the market in Russwood. Two have sold in the past six months.

Why Russwood? Location! This is the heart of Preston Hollow. Additionally, ranch-style homes are extremely popular these days. Many baby boomers who unloaded their larger homes (and utility bills) and headed to condos are now looking to snag a North Dallas ranch, says Virginia Cook agent Marty Marks. They don’t want stairs because of bad knees, but they don’t want zero lot line, either. Russwood fits the bill perfectly because the homes remodel so well and offer generous square footage. And then there are the trees. “Those live oaks planted in 1962 are fully grown and gorgeous now,” Kathleen Johnson says. “And we have rear alleys with underground utilities, so you don’t have all those ugly wires found in most of the older neighborhoods.”

Russwood residents also say their neighborhood is low-crime because there is no through traffic and homeowners can participate in a security patrol. Plus, there’s the voluntary homeowners’ association, where you can be as active as you like and join a supper club, book club, wine club, or walking club.