“We’ve been the proud owners of Bichon Frises, which is the breed of dog that Lily Claire is, for almost 30 years. We went and picked her up—adorable, loving little Lily Claire—and lived up to the commitment to put her on the show circuit, and she became a champion within a couple of weekends and a grand champion within a couple of weekends. So, we knew she was really a girl worth investing in.

“We then hired a professional agent and handler who is the person who manages her show career, and she has done really well. Last year, she finished as the number one Bichon in the country, and this year, as of February—although all dog shows have been canceled for the foreseeable future—she was the number one female Bichon and the number two Bichon over all of the country. So, we’re very proud of her… 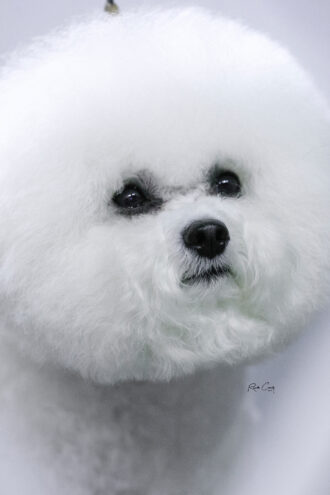 That Face Bichon Frise Lily Claire was born to be a star.
Courtesy of Nancy Brown

“It’s funny. I, of course, work out in an avid way and eat well. I believe in that to my core, and as the CEO of the American Heart Association, I set that example for my employees and for the world. But I’ll tell you, having pets in general, we know the science shows that pet ownership reduces blood pressure, increases physical activity, and reduces stress, and that’s very true. And for me, having Lily Claire and Zippy—who is my 10 and a half-year-old Bichon who lives at home with me—there is no question that my physical activity has increased because of owning them.

“[Lily Claire] has been in 102 dog shows in 18 months. I meet up with [she and her handler] at shows, because they have their whole regimen, and I try to stay out of the way of it. But I try to go at least once a month to a show. There was a show in Longview at the beginning of the year, so I went. For three days, I went down and saw her. But other times, I might just pop in on a show here or there. I go a lot more than my husband does. It’s always fun to go. It’s a wonderful world of people who you might never meet in real life if you didn’t get into this competition.

“For all of us as CEOs, it’s interesting and important to have hobbies. This one for me is awesome because it builds a lot of stuff that’s important to me. I love my animals. I love exercising. I love competition. I love meeting new people and learning new things. So, [showing Lily Claire] has kind of brought all that together for me.”