The unconventional office of real estate developer Jeff Blackard perfectly represents the spirit of its inhabitant. Situated at the top of a bell tower overlooking a small lake in McKinney, it’s accessible only after rotating around a large bookcase on the seventh floor to reveal a hidden spiral staircase, which leads to Blackard’s “nest.”

Tall and boyish-looking, the enigmatic CEO of Blackard Global Inc. leads what friends describe as a “Forrest Gump” life. He has met with world leaders, led mission trips down the Amazon in a boat he built, amassed a fortune through investments and real estate development, and counts Rick Santorum and Glenn Beck among his friends.

Not a big chest-pounder, Blackard is largely under the radar locally. He’s probably best known for developing Adriatica in McKinney, whose centerpiece is the bell tower. The $350 million, 45-acre mixed-use project on Virginia Parkway and Stonebridge Drive is modeled after Supetar, a small fishing village on an island off the coast of Croatia. Looking out from Blackard’s perch at Adriatica, with its cobblestone streets, island chapel, and Old World architecture, it’s easy to imagine that you’re in another place and time.

Though Blackard continues as a consultant on the project and still owns the bell tower and chapel, other builders have taken over Adriatica, which stalled when the Great Recession hit. These days, Blackard has bigger and better things on his mind—namely, Entrada.The 85-acre, $500 million development along State Highway 114 in Westlake will include an amphitheater, three hotels, townhomes and villas, and more than 1 million square feet of retail, restaurant, and office space. With approvals from Westlake in hand, dirt will begin turning on Entrada sometime this summer. Blackard is overseeing every design intricacy, down to the curve of the roads, “so people will really feel like they’re on a hillside in Spain.”

Entrada, he says, is his chance to fully implement “Neoretroism,” a development ideology that has become his life’s mission. He defines it as “a philosophy that advocates the recreation of Old World culture in a modern-day development environment through serving the needs of the village’s inhabitants.” Put another way, Blackard wants to combat what he calls legal segregation caused by zoning. He wants to bring back the spirit of a village you’d find in Europe or in pre-1900 America, where people of different strata are connected by a shared sense of community and where the uses of buildings evolve over time. “We are doing development wrong in this country, but there is a way to do it right,” he says. “This needs to be known by every city planner and every mayor in the United States. Somebody just needs to show them.” 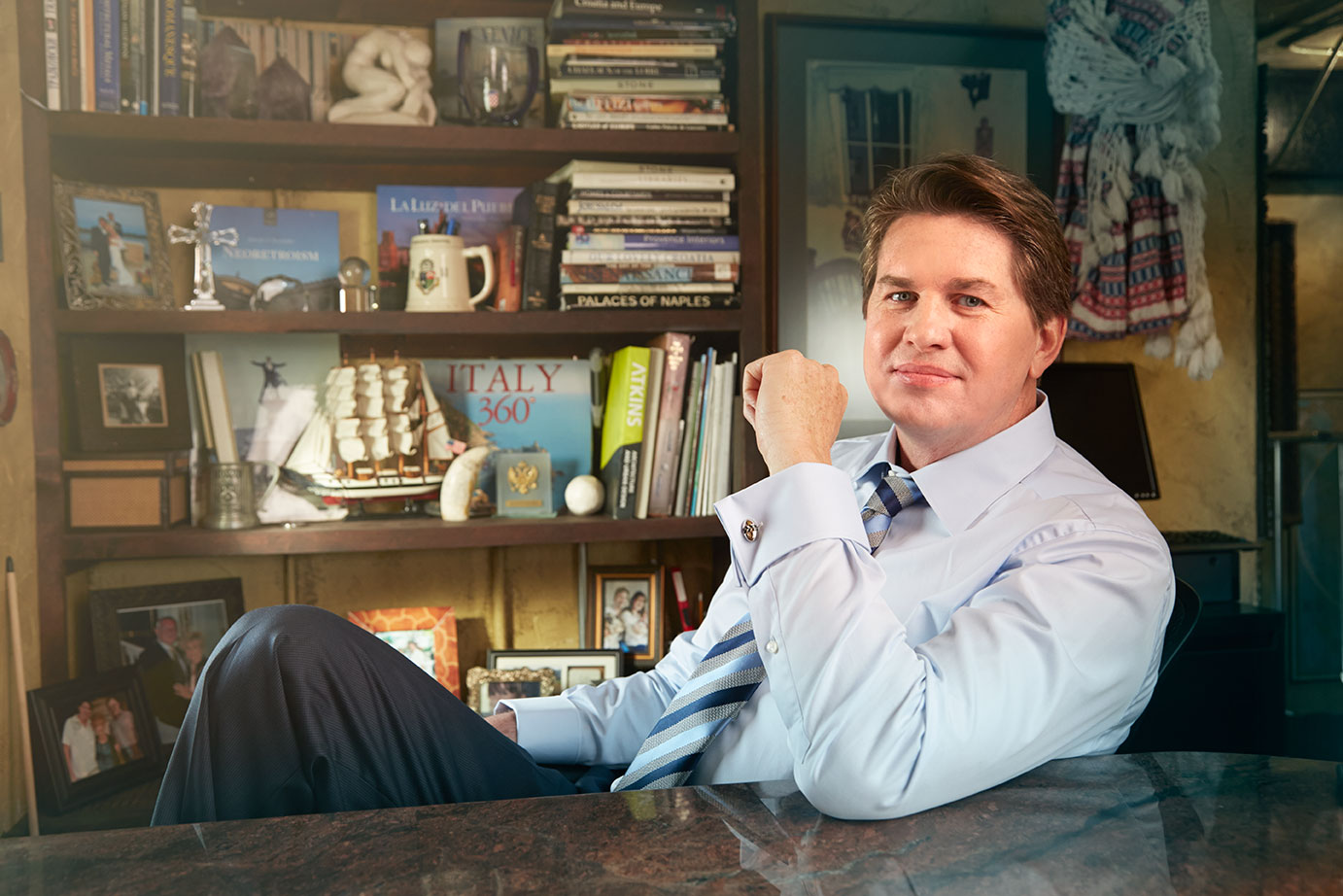 SECRET SPACE: Jeff Blackard calls his bell tower office in McKinney, accessible by a hidden spiral staircase, his “nest.”
‘MY OWN LITTLE KINGDOM’

Born in late December 1957 in Peoria, Illinois, Blackard had a typical Midwestern childhood, until his parents’ divorce sent him into a tailspin. He began to struggle in school, especially with reading, and failed both second and third grades (the shame of which he would carry with him for decades). As he got into junior high and high school, Blackard, who was older and taller than his classmates, found success on the basketball court and in track and field. But he needed good grades to be able to participate in sports. Because he still struggled with reading, he figured out other ways to get by. He honed his observation skills, paying close attention to whatever was said in class, watching the movement of others, being aware of his environment at all times.

Blackard earned an athletic scholarship to Northwestern University, where he was a decathlete and played on the school’s basketball team. Keeping up with his classwork meant working twice as hard as everyone else. During his senior year, he finally got some help. The mother of the team’s ball boy, a schoolteacher, taught Blackard to read. “We started with second-grade books, and moved up from there,” he says. “Here I was, this big man on campus, hiding my reading books so my fraternity brothers wouldn’t find out.” (Today, Northwestern includes Blackard on its list of 100 notable graduates, right up there with Warren Beatty, Dick Gephardt, and Stephen Colbert.)

After college, Blackard headed to Dallas, the land of opportunity. After knocking on a lot of doors, he landed a job with Dallas developer Cambridge Cos., led by Chuck Wilson, and was put in charge of two residential projects in Fort Worth. “This was the early 1980s, and they were like 500- and 800-acre developments, both of which had not sold a lot in at least a year,” Blackard says. “So what was I really in charge of? Making sure the grass was cut. It was 45 minutes from Dallas, and no one wanted to drive to Fort Worth. So I had my own little kingdom.”

Blackard threw himself into learning about real estate development, soaking up information from Wilson and others. He put in 12- to 14-hour days, seven days a week. Still struggling with insecurities, he was determined to outwork everyone else. Before long, the market bounced back and business was booming. By the time he was 26, Blackard was made a partner at Cambridge and put in charge of its office and industrial divisions. A few years later, with Wilson’s blessing, he went out on his own, taking his team with him. 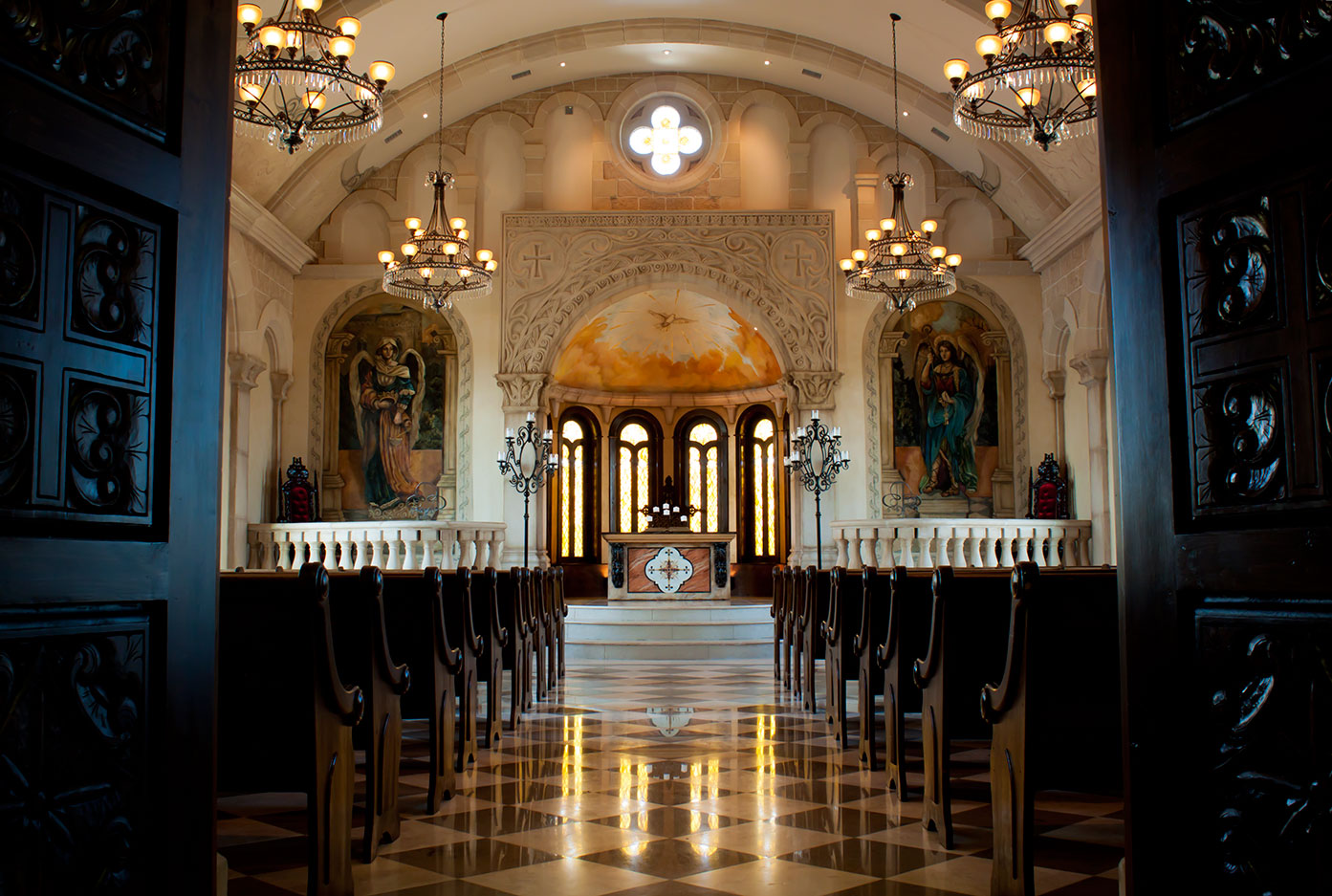 FAITH AND FRIENDS:The Bella Donna Chapel in Adriatica.
STAYING GROUNDED
Blackard focused on residential projects and developed thousands of lots during the 1990s. Projects included Frisco’s Griffin Parc and The Lakes on Legacy Drive, which he did in partnership with Dallas businessmen David McDavid and Tom Hicks. He also invested in several technology companies. But it all left him feeling unfulfilled. “I really wasn’t happy with my career, even though I was making a lot of money,” he says. “Back then, there was just this emptiness I felt when I developed something like Lakes on Legacy. It was a beautiful project that won all kinds of awards, but there was some kind of emptiness, and I was always trying to figure it out.”

A deeply convicted evangelical Christian, Blackard tried to fill the void by doing more mission work. Over the years he had gone on trips to Nicaragua and Costa Rica and had been doing annual missions down the Amazon, but he wanted to do more. He bought the hull of a 100-foot-long ship and spent six months outfitting it with surgical, dental, and pharmaceutical
facilities. It became the first of several ships owned by Amazon Outreach, an organization Blackard founded in 1999 to spread the gospel and provide medical care to villagers in the Amazon River basin. He also connected with Nathan Sheets (co-founder of the “I Am Second” campaign) and began making regular mission trips—sometimes monthly—to third-world countries. 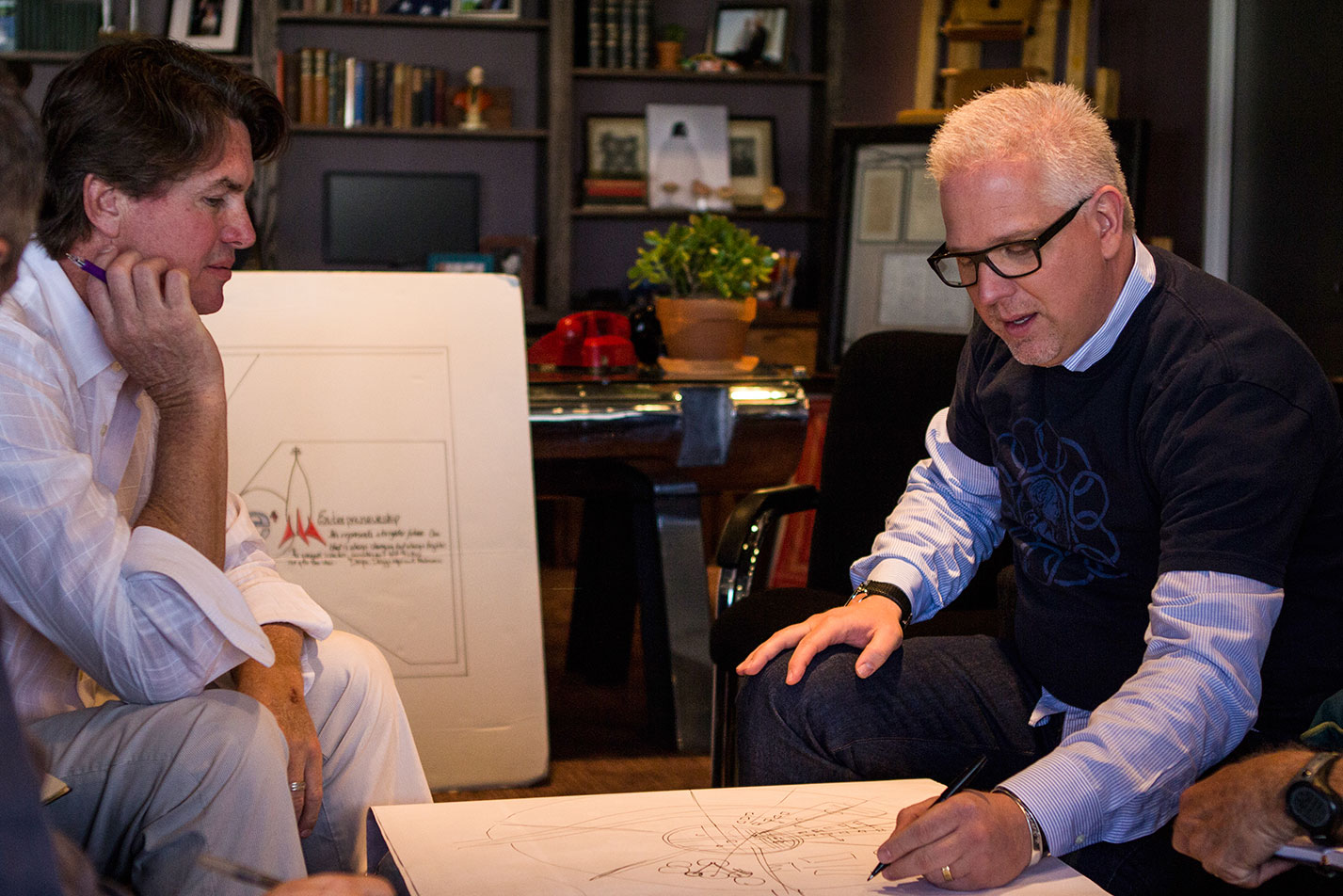 Discussing his Neoretroism philosophy with political commentator Glenn Beck.
“I would seek out the worst places, like Bangladesh, just so I could stay grounded here in America,” Blackard says. “I’m in Ethiopia, where children have nothing and are living under a piece of tin. Here at home, I’m going to the men’s locker room at Stonebriar Country Club, opening up a packet with a disposable toothbrush that already has toothpaste on it. That’s the world I live in. But it’s not the real world.”

Through it all, Blackard’s development work continued. Then in October 1999, he set up a meeting with PGA golfer Payne Stewart and three business associates to consult on a golf course for Griffin Parc. Tragically, the plane carrying the group from Florida to Dallas lost cabin pressure soon after takeoff, incapacitating the pilots and their passengers. The plane traveled on autopilot for about 1,500 miles before running out of fuel and crashing in South Dakota, killing everyone on board. Devastated, and feeling responsible, Blackard shut down.