If you called central casting and asked them to send you a 1960s prototype football trainer with a nifty nickname from a renowned program in the south, you would get Bill “Groundhog” Ferrell. One afternoon after practice, the University of Arkansas trainer, so nicknamed for his Feb. 2 birthdate, looked at the player stretched across his table, and said, “Jones, I believe you have the lowest tolerance for pain of any kid we have ever had at this school.”

It was 1964, and the player was Jerry Jones, co-captain of a very good Razorbacks football team. Jones didn’t argue. Instead he explained, “Groundhog, I’m different from these other guys. I feel more, I see more, I talk more. I just have a lot more feelings than these other guys.”

Those “feelings” were famously put to the test in 1989, after Jones bought the National Football League’s Dallas Cowboys and sacked Tom Landry, the only head coach the franchise had ever had. Other staffers were given pink slips, too, as Jones declared himself the complete overseer of everything—from “socks to jocks”—and made moves that were branded as callous and unfeeling by reporters and talk-show callers. Jones himself was labeled a “hillbilly buffoon,” with one columnist referring to him routinely as “Jethro Jones.”

Jones blames part of the clumsiness on his 100 percent equity purchase of an existing business. “Everything I had done prior to that was pretty much a startup,” he says. “And it wasn’t like the NFL gave us a handbook.”

Hate mail and death threats prompted security measures, and pressure mounted after an atrocious, 1-15 first-season record. When Jones purchased the team from Harvey Roberts “Bum” Bright, it was already losing $1 million a month. When consolidated with Jerry’s own 11 percent interest on debt pledged by accounts receivable, “I was losing more than $100,000 per day,” Jones recalls.

It didn’t help matters much that, by 1990, Jones found himself on the wrong side of then-Arkansas Gov. Bill Clinton’s wrath and what Jones calls a “$1 billion lawsuit.” The suit, which eventually went away, basically charged Jones with swindling the Arkansas Public Service Commission to attain money to buy the Dallas Cowboys.

“We are all human,” Jones says. “You come in here and invest $160 million in the community, and all you do is get your butt kicked.”

He grips a water bottle tightly with both hands and slowly, dramatically, raises it to his lips. “Back then,” he says, “I would have had to do this, just to get a drink.”

The new owner had a bed at the Cowboys’ Valley Ranch headquarters in Irving, but rarely slept. He could hear the words of J.W. “Pat” Jones, his father and his hero, swirling around in his head: “Jerry, you cannot afford to fail now. You are just too much in the public eye.” 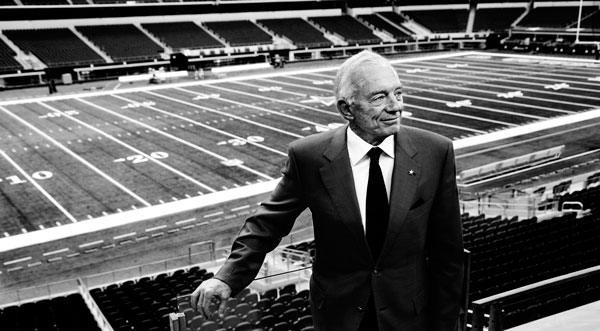 WORRYWART: Jones says he’s concerned that the team’s brand could fade without more Cowboys wins. Stanton Stephens
Stanton Stephens
The sleeplessness, the debt, and all the pressure piled up to finally slap Jones with what he calls “the good-time heart.” Doctors have a much more serious name for it: atrial fibrillation. That’s an irregular heartbeat, dangerous enough that it can substantially increase the chance of a stroke. Several times Jones has attempted medical procedures to revert his heart rhythm back to normal, each time to no avail. He still has the condition and treats it “with pills and blockers.”

Jones stops talking about those early years long enough to dab his eyes. “All of that hit me right about the same time,” he says. “It was such a trying time. I sometimes tear up just talking about it. Sorry, hell, I’m tearing up right now. I think it was almost some kind of traumatic …”— here Jones stops to take a deep breath, looks down, then looks up smiling—“it all increased my desire to achieve.”

He set out to raise revenue and slash costs, likely keeping in mind what Sam Walton once told him: “If you are not short-handed, you are overstaffed and will never [travel in the stratosphere with] your heroes.” Jones cut the Cowboys staff considerably, to fewer than 100 employees. (More than 600 work for him today.) Raising revenue, however, would prove to be more difficult. Only about 15 of the 100 suites at the Cowboys stadium in Irving had been sold. So Jones began courting potential suite buyers himself: “Jimmy [Johnson, the head coach] and I would sit with the prospect there in the suite and do [fake] play-by-play: ‘Aikman back to pass. What a throw! Cowboys score!’ ”
No one questions Jones’ energy and desire to achieve. But to really understand the drive behind that passion, you have to go back more than 60 years, to when Jones was a little boy working for his entrepreneur-father, who owned a supermarket in North Little Rock, Ark.

SALESMEN ON THE FLOOR
Here’s a shocker: Pat Jones was a hands-on owner who courted customers like a carnival barker trying to woo the masses under the big top. “My dad would walk around in full cowboy gear carrying six guns and all,” Jones recalls. “We had a bandstand right in the middle of the store, and he would put all sorts of events on that stage, like talent shows.”

Dad wasn’t the only salesman working the floor. “I guess I was about 9 years old,” Jones says. “And I dressed up in a little bow tie after school and came to the store. Sometimes I would push the cart around for the folks I knew who might tip a quarter.” 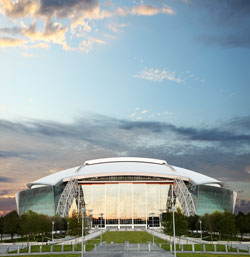 “I’m telling them they are appreciated, and giving them little pep talks,” Jones says. “People don’t realize that the Dallas Cowboys are the biggest [advertising and promotion] commitment from Ford, except for the Ford Field there in Detroit.”

His advertiser’s No. 1 goal is to sell its product or service, Jones recognizes. So the little boy in the bow tie is still eager to push that cart around for a nice tip.

“These partnership interests are something I picture like I own them as well,” Jones says. “And once we sign those [contracts], then I tell them I will fly across the country to speak with their customers. I just treat ’em like I own ’em.”

Longtime friend and business partner Mike McCoy says that, back in the day, Jones behaved like a boss even when he was a minority-interest partner. “He was still doing it the Jerry Way,” McCoy says.

The Jerry Way is full tilt, and Jones says he doesn’t mind “playing the fool” if it brings success to him or his partners: “I have friends ask me, ‘Jerry, why do you do those crazy Papa John’s commercials?’ Well, what we try to do is team up a service or product of the highest quality and allow them to take advantage of that Cowboys visibility.”

The Cowboys now own more than 100 Papa John’s franchises in Dallas, Austin, and Waco.

Sometimes the Jerry Way is not the right way. Sometimes, a family member has to step in to offer interference. Take the time when Jerry’s real estate company, Blue Star Land LP, initiated a marketing plan for a 2,000-unit apartment complex near Austin.

“I wanted to bring the Cowboys cheerleaders to pose in front of the ‘Open for Business’ sign,” Jones says. “But Charlotte [Jones’ daughter Charlotte Jones Anderson] overruled me on that one.”

Indeed she did. Charlotte’s older brother Stephen recalls Jerry wanting to somehow have the cheerleaders “dangling their legs over the sign.”

“Mom and Charlotte nixed that and moved the cheerleaders and the selection away from our purview,” Stephen says. “We all knew that would not be a good mix.” Instead, Jerry offered game tickets to those who signed leases and managed to get Troy Aikman out to the site, where he tossed a football around with prospects. The project leased up in no time.

Jones doesn’t talk much about his other ventures, saying it’s “a quiet time” in the oil patch, and repeatedly stressing that, “I spend 95 percent of my time on football.” He says he is proud, however, of Blue Star, which has real estate holdings in places like Allen, Prosper, and Austin: “Some people think the real estate may be worth more than the franchise some day.”

Forbes recently put the Cowboys’ value at $2.3 billion, tops in professional football, saying Jones now has his “over-the-top stadium” in Arlington to go along with his “over-the-top” Cowboys brand.

Jones admits that a lot of that branding was accomplished by the earlier ownership regime, and calls former Cowboys general manager Texas Earnest “Tex” Schramm Jr. a “genius.” But for all the cheerleaders and the familiar “America’s Team” moniker, Jones says that, until he arrived, the franchise was unable or unwilling to convert that to “juice” (or money).

Jones, though, was more than willing. Many know how he directed the Cowboys to align with a soft drink different from the one blessed by the NFL. The league sued Jones for $300 million, and he countersued for $750 million. Jones saw the battle “as a kind of states rights versus federal rights argument,” he says. The league “wanted to fundamentally control the franchise, but it was all resolved, and that is how all teams operate today.”

Jones deserves a lot of credit for the way teams operate today in the realm of television revenue and what he calls “growing the pie.” After convincing enough fellow owners to rebuff a discounted television network bid, he set out to sign more lucrative contracts, with one owner “waving a finger in my face and saying, ‘You are nothing but a crazy wildcatter.’ ”