Fossil’s Heather Leather Watch. photography courtesy of Fossil
Fossil Inc. likes to say, “Long Live Vintage.” The tagline is a loving nod to the feel-good designs that Fossil keeps re-imagining and re-invigorating. But it’s also a subtle reminder that some simple, classic ideas are built to last. The company might as well wink and whisper, “Long live Fossil.”

If you don’t know Fossil products, take a closer look next time you’re shopping or get one of its 18 million catalogs in the mailbox. Fossil sold $1.8 billion worth of watches last year and $700 million in clothing, shoes, jewelry, and other accessories.

Watches range from no-name private labels for Wal-Mart and Target to $2,000-plus Swiss pieces at Neiman’s and Nordstrom. The sweet spot, the territory that Fossil wants to own, are watches that sell for $85 to $600. Fossil often commands a long sweep of counter space in the center of department stores—prime real estate reserved for small items that turn over fast and deliver big returns.

At its own stores in North America, Fossil generates $715 in sales per square foot, and its European outlet stores deliver $1,221. That’s roughly twice the performance of a typical U.S. specialty store.

More than half of Fossil sales are its own brands, but it also makes and markets watches and accessories that carry the names of Michael Kors, Armani, DKNY, Diesel and, starting next year, Karl Lagerfeld.

The Fossil story is already enshrined in the bootstrapper’s hall of fame. A 24-year-old college dropout, Tom Kartsotis tired of scalping tickets outside Texas Stadium and bet it all on making cheap fashion watches in Hong Kong. Older brother Kosta, then a Sanger Harris exec, helped get the line into department stores. Chief designer Lynne Stafford helped establish the retro Americana look and later married the founder. And lots of people got rich when the Richardson company went public in 1993.

But that was just the beginning. Fossil has roared on, swamping the competition and surviving the severe cycles of the global economy, fashion world, and retailing itself.

In 20 years, Fossil revenues grew from $57 million to $2.5 billion—an annual growth rate of almost 21 percent. That’s worth repeating: Fossil has sustained that huge growth for two decades. It never reported an annual loss, and operating income soared 40-fold.
This was a scalable business before the Internet popularized the concept. Built product by product, store by store, country by country—around the idea that great design, low prices, and broad distribution would carry the day.

Along the way, Fossil was transformed from a small watch company into what it calls an international lifestyle brand. That’s a fancy way of saying that people want its clothing, too, and handbags, wallets, shoes, jewelry, and sunglasses. Even Fossil’s free downloadable wallpapers are cool.

And pick your point of diversification: by product, by geography, wholesale vs. retail, licensed brands vs. Fossil.

It even has 104 outlet stores, and more on the way, because there’s a big return in liquidating your own merchandise. Same-store sales at Fossil outlets rose 26 percent last year, which makes for a winning hedge against a slowing economy.

None of this was a gimme. Watches accounted for 72 percent of Fossil revenue last year—and who knew this would be a hot sector with such staying power? Every (rare) time that sales slip, analysts complain that cellphones are finally making watches obsolete, only to have Fossil prove them wrong a little later.

Speed Bump
Fossil has helped turn watches into must-have, can-have fashion accessories. It tries to get a design edge with new materials for dials, crystals, and straps. In the early days, it created tin boxes to hold watches, a mid-century throwback that became a Fossil signature—and remains beloved today. And if watches are about the look, rather than the utility, one is never enough.

At the end of last year, Fossil had 13,100 employees, with more than half outside the country. About 1,100 work in the headquarters in Richardson, and more than 500 at a Dallas distribution center.

For a while, it seemed that Fossil had no limit. Then it hit a speed bump, and investors went over the edge. On May 8, the stock price dropped 38 percent on 16 times the usual volume. 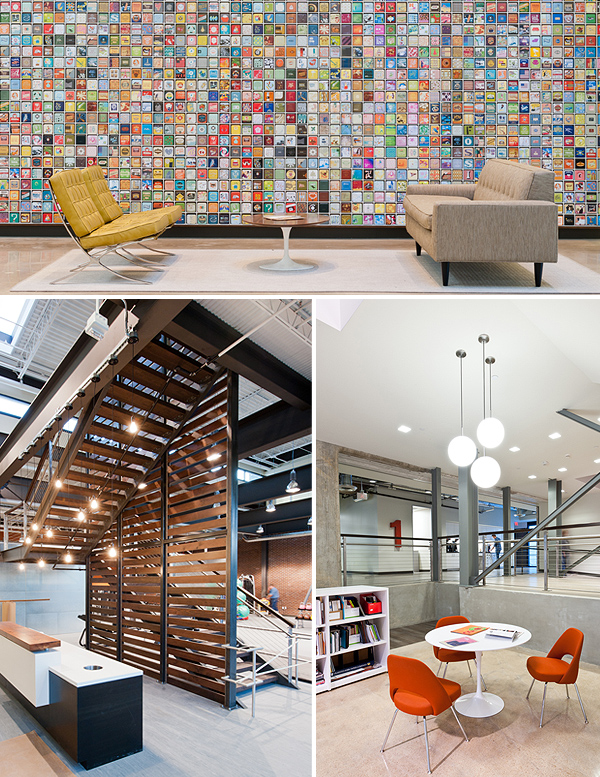 The headquarters reception area features a “watch case” wall. (Right and below) Different views of a headquarters huddle room and the company staircase. photography courtesy of Corgan Associates
Fossil disappointed investors, because first-quarter sales rose just 9.8 percent, and it also trimmed full-year forecasts. The big problem was in Europe, where sales rose just 4.7 percent. For 2012, Fossil still projected a 16 percent increase in sales, with stronger profits.

Those are hearty numbers, but Fossil is graded on a curve. One analyst wrote that the punishment didn’t fit the crime, and she reduced her projections for Fossil’s five-year growth rate to 15 percent. If that’s the fallback position, you get an idea of the strength of the business.
Sure enough, in the second quarter, Fossil reverted to form, with sales and net income growing by double digits again. Even Europe, still mired in economic crises, bought 14 percent more Fossil stuff.