When it comes to raising money for nonprofit groups and other worthy causes, few people have been more successful than Dallas’ William “Bill” Lively. After more than two decades in various revenue-generating positions at Southern Methodist University, Lively agreed in 2000 to oversee the fundraising campaign for the Dallas Center for the Performing Arts, which will open its doors in October. During his tenure more than $334 million was raised for the center, including 130 separate gifts of $1 million or more. Last year, Lively was appointed president and CEO of the North Texas Super Bowl XLV Host Committee, which has already secured more $1 million sponsors than any Super Bowl Host Committee in history. We sat down with Lively recently to talk about the keys to his success.

D CEO: You’ve attracted 10 $1 million “founding sponsors” for the 2011 Super Bowl in North Texas so far, and you’re shooting for 15 by year’s end. How have you gone about approaching potential sponsors?

BILL LIVELY: We’ve divided the host committee into standing action teams, and one of those teams is a sponsorship action team chaired by Ross Perot Jr. That team includes people like host committee chairman Roger Staubach, Troy Aikman, Elaine Agather, Mike Berry, and the CEOs of corporations that have already made sponsorships: Alan Boeckmann of Fluor, for example, Matt Rose of Burlington Northern Santa Fe. The way we do it is, we make an appointment with the CEO of a corporation and then, if the company’s in Fort Worth, Mayor Mike Moncrief, Roger Staubach, and I may go visit with the CEO; if it’s in Dallas, Mayor Tom Leppert and Troy and I may go. Every time we do this it’s a group effort.

The economic recession must be affecting these visits, isn’t it?

The economy is without question suffering. But what we’re finding is, because this region is a headquarters region, lots of these companies understand the market value of being a sponsor of the first-ever Super Bowl here, and are committing their sponsorships to be paid over a two-year period.

Have you been forced to do anything special to get a handle on your own expenses with the host committee, given the recession?

We put together our business plan for the Super Bowl as volunteers last fall. And the plan was very frugal right from the beginning, so we haven’t had to change that appreciatively. We’re very cost-conscious with this, because we can’t afford to be otherwise. We’re spending very little money on our staff; we’re getting most of what we do underwritten with in-kind gifts of various kinds, ranging from paper and printing to soft drinks and furniture.

This office furniture we’re sitting on, for example, was donated by PlainsCapital Bank. So we’re trying not to spend any money that we don’t have to spend, so we can spend the money on things that will make the Super Bowl an enormous event for the entire region.

Yes, and that’s been a huge help. It’s saving us several thousand dollars for two years. 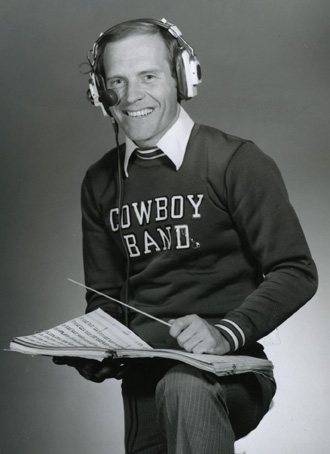 From 1975 to 1988, Lively led the Dallas Cowboys band. photography courtesy of Bill Lively
How willing have companies been in general to donate money in this environment?

There is a great sensitivity in the entire country right now among companies to announcements of sponsorships or philanthropic support, because there is a keen awareness that companies have a responsibility to their shareholders, to their employees, and to the future of the company, and they’ve got to be able to defend any kind of sponsorship or gift they might make.

In the case of the Super Bowl, sponsorships are awarded by companies from their marketing budgets. They are a kind of advertising and marketing. So our task is to make sure that we convey to the marketing people at these corporations all the unique benefits they can derive from this. Then they can explain to all parties that this is a good investment to market the company to the region in a way that they couldn’t do more effectively otherwise.

Have you noticed the objections ramping up lately?

Yes. I’ve seen more—not objections so much as just sensitivity. If we’re going to do this thing, they’ll say, let’s determine the most appropriate way we can announce it to all audiences so that we posture the company in a favorable light. I don’t know how it’s working right now in the philanthropic arena, because I don’t do that now. I’m sure that there’s a paralysis in the philanthropic arena to a degree, where people are taking a step back to wait and see when this thing will begin to turn around before they make huge gifts that affect their assets.

You’ve ridden out several downturns during your career, haven’t you?

Yes. We had the downturn to the economy in the 1980s. We had the football scandal, for goodness sake, at SMU that completely ended an operative capital campaign. In the campaign to build the performing arts center, we had the tragic death of the chair of our building committee—Vin Prothro—nine days after the campaign was launched in 2000. Then we had 9/11, which affected the entire world; and the Enron debacle, which was not insignificant. Then we had ups and downs in the markets and with public companies.

I think the goal, though, is to have a sound business plan and good volunteers involved and have the courage to persevere and move on. We had every reason to stop the performing arts center campaign at least twice, and we didn’t do it. We didn’t slow it down, we didn’t stop it. We had ups and downs in terms of new commitments, but we never stopped. We persevered and, because they persevered—the volunteers, that is—there was never an interruption. And that was psychologically essential, because an interruption can suggest failure to some people. I mean, you can’t have failure. You just can’t go there.

Let me ask how you got to where you are now, career-wise. You attended SMU before you worked there, didn’t you?

I did. I went to SMU for my first degree. I graduated in 1965, and then I was a band director in the Dallas Independent School District. I taught high school band in DISD for seven years. Then I went back to SMU as director of the Mustang band, and I stayed at SMU for 25 years. I was on the faculty for 11 years and in the administration for 14 years. I was the director of bands for the Meadows School of the Arts. I became the associate dean of the Meadows School and, later on, in 1984, I became vice president for development and alumni relations and public affairs.

You were originally a musician?

I played trumpet through high school and college, and had a great ambition to be a composer. I didn’t have enough talent to be a composer, but I enjoyed being a conductor and teaching young people. The joy of teaching was children, and teaching was going to be my life’s work. Then I got sidetracked in 1978, when I was asked to become one of the deans of the school of the arts at SMU, and I never looked back. 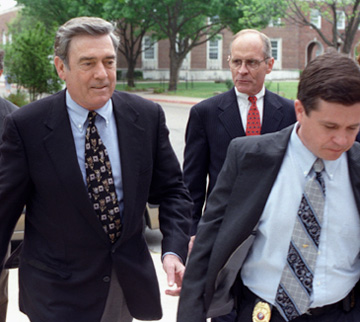 THE COMPANY HE KEEPS: Bill Lively (in red tie) escorts newsman Dan Rather to a symposium to help kick off an SMU fundraising campaign in 1997. photography courtesy of Bill Lively
Is that where you developed your fundraising talents?

I don’t know what talents I had, to be honest with you. I don’t know how I ended up doing what I’m doing; it certainly was no career path. When I was asked to become director of the SMU development program, I didn’t even know what that meant exactly. The university wanted to change its fundraising culture, though, and I was a change agent.

The university invited me to in effect reinvent the institution’s fundraising culture—the way it raised money. We computerized our fundraising, for example, because PCs hadn’t been in existence for long at that time. More importantly, we started looking at fundraising in a different way: we had to focus on the university as a whole, as opposed to its different parts. We also had to understand how to market the university for philanthropic purposes, how to take our story to the community. Then we had to overhaul our stewardship program—how we said thank you, for instance—and we had to develop more of a business-like approach. We needed accountability and transparency.

Why did you leave the university?

I’d been at SMU 25 years. I told the university’s president, Gerald Turner, that I’d done everything I was qualified to do—and some things that I wasn’t qualified for—and that it was simply time for a change. Meantime Tom Cruikshank, who had just retired as CEO at Halliburton, was living in Dallas and serving as chairman of the board of the Up With People group, which is based in Colorado. Tom found me and recruited me to be the president and CEO of Up With People. So in 1998 we went to Denver and did that for two years.