Enjoy unlimited access to all of our incredible journalism, in print and digital.
Subscribe Now
Advertisement
Defiance

Earlier this week, I wrote about the increasingly dismal state of financial affairs at the Kay Bailey Hutchison Convention Center, and, as always, I enjoyed learning even more from the comments.

Mavdog suggested I needed to look beyond the center’s declining revenues and increasingly staggering losses and analyze hotel trends throughout the entire city of Dallas, under the theory that the Kay Bailey could be driving significant economic growth in the city’s overall hospitality industry that would more than offset its massive taxpayer subsidies. Amy S. also suggested a comparative analysis with other markets. Both comments were on point. What we needed to do was compare the growth of the hotel market in Dallas with the growth of the hotel market in the nation as a whole. Then, we could charitably attribute some or all of Dallas’ out-performance to a Dallas Convention & Visitors Bureau strategy of using the convention center as an “economic engine,” following its DCVB-advocated $130 million expansion in 2003, which then triggered the need to construct a DCVB-advocated $500-million convention center hotel shortly thereafter.

To perform the analysis, I obtained hotel gross revenues for the entire United States. Then, I did the same thing for the city of Dallas, using hotel occupancy tax collections (see p. 134 of the 2014 City of Dallas CAFR) which equal 7% of hotel gross revenues. Starting with 2010 as the base year, we could then calculate the magnitude of Dallas’ out-performance. The results of the analysis are presented below: 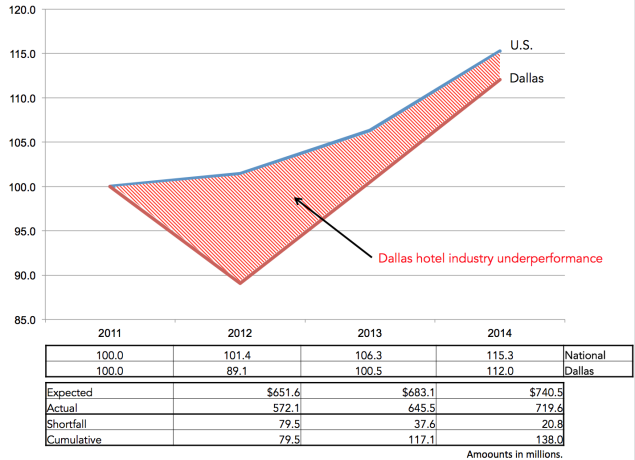 Well, this is kind of interesting. What this graph illustrates is the sub-par performance of the Dallas hotel market since the opening of the Omni Hotel in late 2011. The blue line shows how the gross revenues of Dallas hotels would have grown if they had simply followed the national average. By 2014, U.S. hospitality industry gross revenues were up 15.3%. In contrast, Dallas hotel revenues were up only 12% during the same period, with significant underperformance in 2012.

To put it into dollar terms, I computed actual Dallas hotel gross revenues from 2012 t0 2014 (based upon hotel occupancy tax collection data) — growing from $572.1 million in 2012 to $719.6 million in 2014. Then I calculated what they would have been if they had simply grown at the national average (the “Expected” gross revenues). Taking the difference, one is able to calculate the annual and cumulative shortfall over the three-year period. It appears, based on the data, that Dallas hotels generated $138 million less in gross revenue during the period than one would expect, with 2012 being an especially awful year for Dallas. The question is: why?

Listening to the budget debates over the last few weeks, I suspected I had the answer. Anyone who was paying attention knows that the city is under extreme financial pressure for some reason. It all seems a bit curious, since North Texas is one of the fastest-growing metropolitan areas in the U.S. But I knew what I had been seeing: packs of marauding dogs terrorizing southern Dallas residents because no money… streets literally disintegrating because, again, no money. I assumed the same would be the case with the DCVB, so I did a quick comparison of their budget to a handful of other city departments below, using 2010 as a base year. DCVB’s spending history is pulled from p. 13 of the August briefing to the council’s Economic Development Committee, city departmental spending comes from p. 135 of the city’s 2014 financial statement. See the results for yourself: 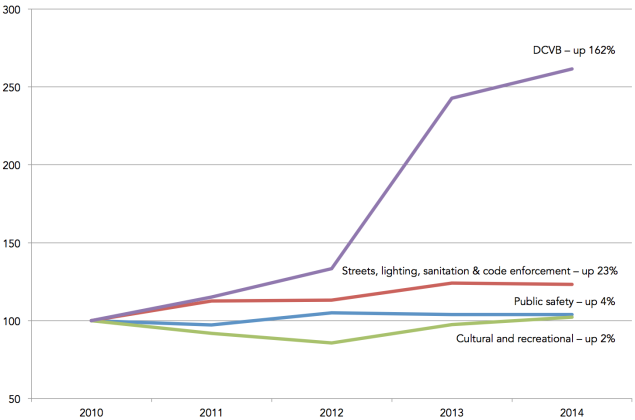 As illustrated, DCVB spending appears to be up 162% since 2010 vs. 23% for streets, lighting, sanitation and code enforcement, 4% for public safety and 2% for cultural and recreational. This makes me wonder if it might not be time for a shift in priorities? Might not spending less on promoting Dallas and more on actually increasing the desirability of Dallas as a place to visit have a more positive impact on the local hotel industry and the economy, in general?

What do you think? Let me know in the comments.

UT Dallas is paying students to get vaccinated. Pandemic unemployment benefits to end next month.
By  Will Maddox
D Magazine Directories