No one knows the importance of decking the halls — or in this case, the gazebos — better than Tommy Bourgeois, designer of Dallas Arboretum’s annual 12 Days of Christmas exhibit. For the fifth consecutive year, the Arboretum has unpacked the 500,000 lights, 28,328 rhinestones, and several elaborately decorated birds to decorate the Victorian-style gazebos visitors will find across the grounds through the holiday season. Bourgeois generally leaves the unboxing to staff, but he did unload some details about the exhibit’s feathered friends. 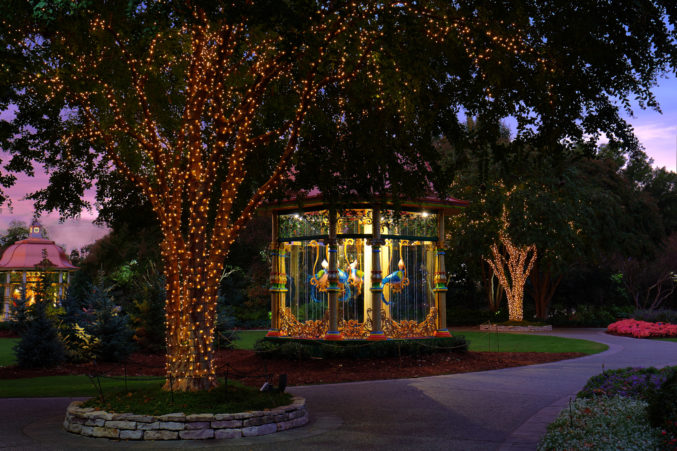 The two turtle doves, three French hens, four calling birds, six geese a-laying, and seven swans a-swimming are covered in plumage of non-endangered birds by a female employee of the Jim Henson Company, best known for bringing to life the Muppets characters. The feathers are dyed a variety blues, greens, light pinks, and black, and are complemented by painted pheasant tail feathers. Swans are textured with white faux fur hidden amidst their feathers, while turtle doves are adorned with matte sequins that shine like brushed chrome. With the exception of flown-in California feathers, most materials are locally sourced. “The man who ran Dallas Stage Scenery at the time of the exhibit’s inception, Greg Blackburn, who has since passed away, was big on local,” says Bourgeois. “We did everything we could to source it all locally and build it here.” 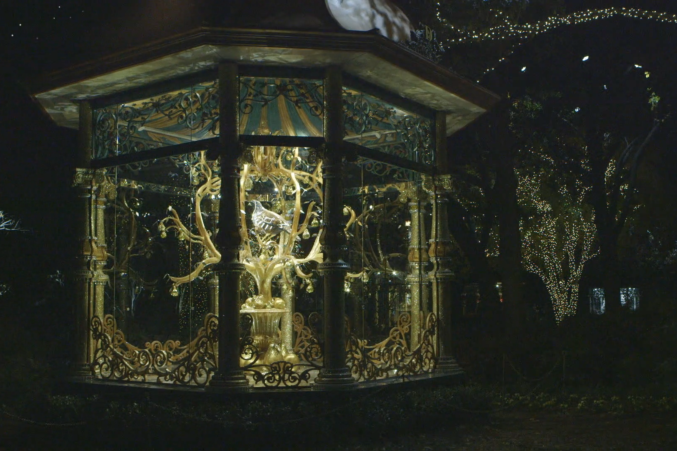 A partridge in a pear trea.

We’d be remiss in not touching on the partridge, whose fabulous perch in the pear tree is the first thing guests see as they make their way around the exhibit. He’s adorned with every kind of rhinestone and sequin imaginable, according to Bourgeois, and took eight weeks for Bourgeois’ design team to complete. Dyed sequins along the exterior match the coloring of his live counterpart, while both flat and cupped rhinestones add holiday sheen. The partridge is surrounded by gold and silver mirrored leaves, all purchased locally. “He is pretty spectacular,” says Bourgeois. The gazebos themselves are covered in half dollar-, quarter-, and nickel-sized rhinestones that Bourgeois estimates number at nearly 50,000.

The 12 Days of Christmas exhibit opens tonight and will be open most Wednesday and Sunday nights (be sure to check the website) through December 30th. Bourgeois expects the concept may change next year, so enjoy your walk through the Victorian winter wonderland while it still stands.

It may be chilly outside, but the 12 Days of Christmas is looking GREAT this year. Visit DallasArboretum.org/12Days to get tickets for the 12 Days of Christmas at night, opening this Wednesday. #dallasarboretum #holidayatthearboretum sponsored by @reliantenergy! . #dallas #dallasholidays #dallas #dfw #dallastexas #holidayseason #12daysofchristmas #visitdallas #dallastho #themostwonderfultimeoftheyear