There are already 39 miles of existing trail in the city of Dallas that, if you squint, look like they should connect to one another to create a giant loop. As it stands, they do not. The Katy Trail ends before it reaches the Design District, where a reasonable person could expect this piece of protected pedestrian infrastructure to lead you onto the nearby Trinity Strand Trail. Farther north, the Katy Trail meets up with University Crossing and Ridgewood Trail, which then shoots south on the Sopac Trail near White Rock on its way to the Santa Fe Trail. But if you want to cycle or walk into southeast Dallas into the Trinity Forest, too bad. (That would, admittedly, be a long walk.)

In 2014, the architect Philip Henderson and the developer Rick Perdue began kicking around an idea to link those trails and add a new path that would provide southeast Dallas with an amazing bit of cycling and pedestrian infrastructure. They got the attention of Mayor Mike Rawlings, who advocated for what became known as the Loop Trail. The project got $20 million in the 2017 bond.

Now, six years after the birth of that idea, the Circuit Trail Conservancy, the nonprofit charged with building and raising funds for The Loop, is prepared to issue construction bids on its first project: that 9-mile stretch from White Rock Lake, down into the Trinity Forest, where it will connect with the AT&T Trail near the Audubon Center. When the project is complete, cyclists and pedestrians will have 50 miles of unencumbered trail that will guide them through much of the city without having to exit a trail and cross a street. The project is working in tandem with existing streets and parks improvement projects, even helping nudge the city to create a new 50-acre nature preserve near Samuell Grand Park.

“While trails are amazing and they provide unprecedented access, it’s only through a comprehensive network of sidewalks and bike lanes that we can really provide these types of amenities to the city,” Philip Hiatt Haigh, executive director of the Circuit Trail Conservancy, told the Park Board earlier last month.

The Conservancy has raised $43 million—$20 million from the 2017 bond, $10 million from private donations, and $13 million between the county and the Texas Department of Transportation. The final design links nine City Council districts and will eventually connect to another trail leading to Fort Worth. The Conservancy has applied for funding through the Sports Arena TIF to help pay for its Hi-Line Connector project in Victory Park, which links the Design District with the Katy Trail. Nevertheless, the nonprofit will likely need to raise more money; whether it gets TIF dollars will inform how much it needs, Hiatt Haigh said.

The 9-mile path from White Rock down into the forest is called the Trinity Forest Spine Trail. It will be constructed in two phases, a northern leg that extends from just below the White Rock Lake spillway to Scyene Road in the Parkdale/Lawnview neighborhood of southeast Dallas. The southern phase will extend from Scyene Road to Elam Road, running adjacent to White Rock Creek, down to U.S. 175. Hiatt Haigh says the trail will run 100 feet from the highway, with some sort of barrier between it and automobile traffic. It will connect with the city’s planned Complete Street project at Pemberton Hill Road, where cyclists will find a protected bike lane to guide them into the AT&T Trail in the Trinity Forest.

The Trinity Spine Trail will serve portions of Dallas that have historically been left out of major pedestrian infrastructure projects. There is no easy way for a cyclist to get from White Rock to the forest today. This is first on the list for construction, which is what many on Council have called for.

The planned route of the Trinity Forest Spine Trail, which will extend from near White Rock down into the forest.
Circuit Trail Conservancy

Basically all of this leg will be located in a floodplain. The trail will be built above grade, using berms that will allow it to withstand water produced by up to a five-year flood. Hiatt Haigh says that is high enough for the project’s engineers to predict fewer than three days of flood-related inaccessibility each year. Where berms aren’t feasible, the trail will be built at grade, at the ground’s highest point. Trees, plants, and flowers native to the landscape will be planted nearby to aid in the absorption of rainwater.

There are other improvements coming to the path’s northern leg, closer to White Rock. The city’s Parks Department wants to turn about 50 acres of wooded land just east of Samuell Grand Park into a nature preserve. Currently, the only way into this overgrowth is an illegal drive that’s filled with trash and sometimes parked cars.

This dovetails with the community’s preferred option, contained in a proposed master plan that the Park Board will consider, for the Tenison Glen golf course to shrink from 18 to 9 holes and to convert the remainder of that space to a nature preserve.

That is now coming to fruition. The remaining land from Tenison will serve as part of that nature preserve. Hiatt Haigh says he is in discussions with the Dallas Off Road Bicycle Association to program and maintain it, as it does at 17 trails throughout Dallas-Fort Worth.

Those connections are exciting, both for elected officials and neighborhood organizers who have long bemoaned poor pedestrian infrastructure in Far East Dallas and the neighborhoods in and around Pleasant Grove. 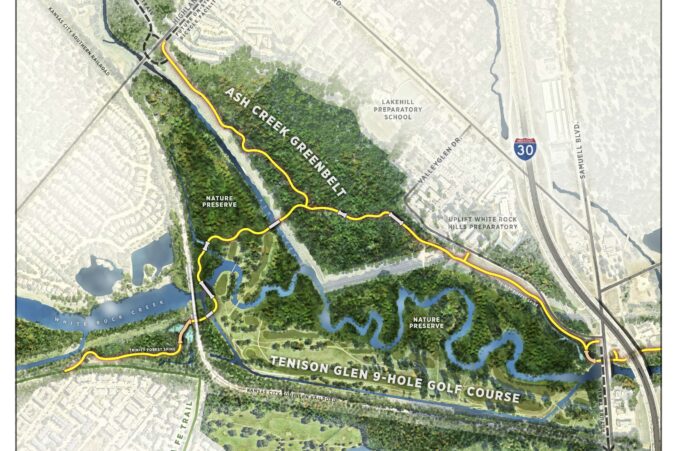 In Far East Dallas, which will be the first phase of the Spine Trail, Vikki Martin sees benefits adjacent to the Loop. Martin is the executive director of the Ferguson Road Initiative, an advocacy group that represents 37 neighborhoods in Dallas’ most eastern section. Of those, she estimates 15 will be impacted in some way by the trail.

“Ferguson Road is really a disconnector of neighborhoods,” she says of the sometimes six-lane thoroughfare that runs about 6 miles northeast, from Interstate 30 to LBJ Freeway. “I live on the southeast side of Ferguson, and there is really no way to access or reach amenities closer to White Rock Lake. The only way to get there is if you drive in a car. Otherwise there are no sidewalks.”

The Circuit Trail Conservancy is focusing attention on a part of town that is starting to pop. A new park and recreation center, White Rock Hills Park, is scheduled to open in November, at 2229 Highland Road. It will connect with CreekSide, a 4.5-acre urban preserve along Ash Creek that was headed up by the Ferguson Road Initiative, the city of Dallas, and the Urban Land Institute. The city is also spending nearly $4 million reconstructing Highland Road near the Forest Hills neighborhood, which includes bicycle infrastructure. That will be connected to the Loop trail.

Councilman Jaime Resendez, who represents southeast Dallas, has spent the months of the pandemic pedaling every street in his district. “It feels relatively safe inside neighborhoods,” he says, “but transferring between them is a different story.”

The councilman grew up in the neighborhood he represents. After meeting with Hiatt Haigh, Resendez pulled his old bike out of his parents’ garage. He started riding around his district a few times a week. That turned into every day.

He saw the neighborhoods at the street level, helping him identify potholes and other problems that required filing service requests with City Hall. He filed more than 200 of them. He stopped and spoke with residents, explained what would finally be coming to their communities. He also found the AT&T Trail and the Trinity Forest Trail; after riding, he called it an “amenity on par with White Rock Lake.”

“It’s really life changing, man,” he said of his cycling habit. “I can’t imagine growing up and seeing these types of things. We never saw cyclists in our neighborhoods.”

Both Resendez and Martin believe investing in improved pedestrian and cycling infrastructure will boost economic development in two parts of town that need it. This isn’t a new theory. Way back in 2008, the National Association of Realtors revised its policy statement to advocate for cycling infrastructure to be included in all transportation projects. In defending the messaging, its senior policy advisor was quoted as saying Realtors “don’t just sell homes, [they] sell communities.” 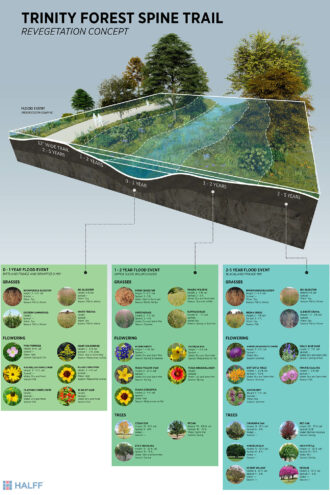 The nonprofit plans to plant vegetation near the trail to help with absorption of rainwater.
Circuit Trail Conservancy

In 2006, the state of Delaware commissioned its own study into the impact trails had on economic development and found that “there is definitely a large portion of the population that sees bike paths as an amenity and will seek out residences near trails, parks, and other natural resource areas.”

Martin and Resendez see the Loop as a way to harness the natural assets in their communities while improving pedestrian infrastructure. A recreation option also serves as an improvement for transportation. Martin sees a hole in the Claremont Village Shopping Center, which was anchored by a Minyards and then a Fiesta grocery store. It’s been empty for years.

“We want to create a sense of place,” Martin says. “We are optimistic we can revitalize that shopping center with the park and the rec center as anchors.”

The alignment of the Trinity Forest Spine Trail has slightly shifted since public meetings began in 2019, mostly below Scyene on its way into the Trinity Forest. Hiatt Haigh says that is because of flooding and property ownership; planned connections at the Joppa Preserve are on hold because the Army Corps of Engineers controls that land. Another connection in Joppa via the existing Trinity Forest Trail is paused while the city negotiates land rights with the railroad companies that own the land. A plan to go through the Trinity Forest in addition to running alongside US-175 is also on hold because of the Corps. But once those other projects are complete, the Loop will provide access to them, Hiatt Haigh said.

For now, The Loop is moving forward. There are tricky connections in urban neighborhoods like Uptown that will come. But it all begins with the crucial Trinity Forest Spine Trail.