Night after night, one of the Mavs’ most prominent off-court team members tucks into section 110 of the American Airlines Center, a few feet away from the dancing Maniaacs, overlooking the game. That’s where you’ll find Ivy Awino, known to most as DJ Poizon Ivy. There are daps and hugs and selfies with friends. There is familiar small talk with season ticket holders, jokes and laughter back and forth with a mysterious voice in her headset, who I later find out is her boss.

Awino knows how to work a crowd. And despite being pulled left and right all the way up to tip-off—and even as the game is in progress—she remains poised.

She started as a Dallas Mavericks ball girl and became the first female DJ in franchise history. It’s safe to say the Narobi native is only scratching the surface, building a substantial fan base with each incremental move. Even Forbes is paying attention. The magazine recently published its renowned 30 Under 30 Class of 2020 list, where 29-year-old Awino earned a spot in the sports category. She was joined by athletes like Patrick Mahomes, Breanna Stewart, and Paul George. She’s one of 11 women featured, and the only DJ..

“I was in disbelief honestly,” Awino says. “Not in a bad way, but only because it couldn’t have been more perfect. I made it during my last year of eligibility and received the notification while at the Mavs office. It was surreal and almost is like divine confirmation at a time where I desperately needed it. If anybody knows my story and where I’ve come from, it couldn’t be more well-written.”

Awino, who moved from Kenya to Dallas when she was nine, expresses gratitude for the support the Dallas Mavericks have given her over the years. She credits owner Mark Cuban and CEO Cynt Marshall for a leadership style that has allowed Awino’s continued growth. Neither is ever too busy to effectively communicate, she says. “I can go on and on and on about why being there is one of the best things that has happened to me this past decade,” Awino says.

The players, too, have taught her a lot. “Being around very disciplined people, one thing that I’ve come to find is that routine is vital,” she says. 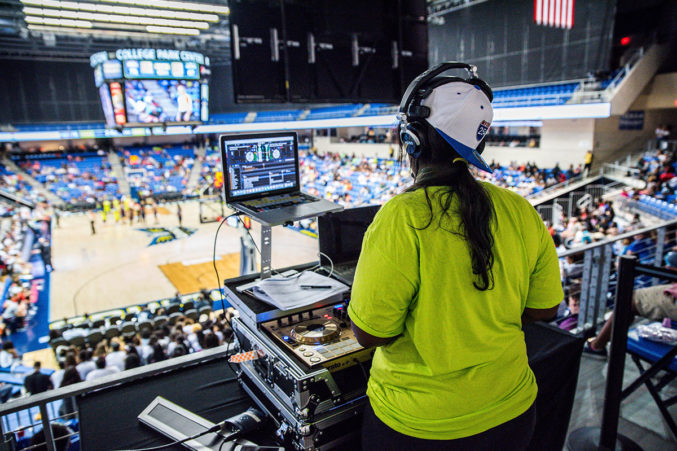 Ivy’s position requires plenty of it. There are many elements that go into setting the musical tone for the night, from showing up two hours before tip-off, to looking over a script to shooting a TikTok for the Mavs’ social media page. She’s also challenged herself to play a fair share of local music.

“I try to implement local music at the biggest of moments,” Ivy says as Trapboy Freddy’s “Lil Quita” plays in the background. “Pre-game, nationally televised games, it’s all about knowing your real estate. I can’t give a percentage of how much local music I play, but I try to do as much as I can.”

While artists like Trapboy Freddy, Flexinfab, and Yella Beezy get spins, Ivy makes sure she’s creating a comfortable atmosphere that all fans and players can enjoy.

“We have a very international team so I have to make sure we take care of our European guys,” Ivy said. “The great thing about people from Europe is that their musical palette is so diverse. Also, this is Texas. We live in a community that has a great Latin presence. I’m from Africa so I play a lot of Afrobeats here. We try and just take ‘em around the world. It’s a worldwide party every night.”

Awino has on three occasions taken the party to the NBA All-Star Game, the first female DJ to do so. In terms of preparation and execution, that gig is a little different than what she does at AAC each night.

Away from the stadium, and when Awino isn’t traveling or tending to her daughter, she’s likely sneaker shopping at Sneaker Politics or flexing her foodie muscles. And the path forward for DJ Poison Ivy is wide open. She plans take part in more charitable events and jump full force into launching her own non-profit. It will focus on empowering youth through sports and entertainment. It’s clear that music will always be the constant denominator in her career.

“The DJ has been and will continue to be one of the most important figures in music,” Awino says. “I know that there’s streaming and I’m certain that the discovery and consumption of music will continue to change but let’s be real – the DJ/artist relationship will and should never change.”