Advertisement
At NorthPark Center, where a Frank Stella hangs above a Godiva chocolate shop and a Joel Shapiro sculpture lives between Hugo Boss and Lacoste, the contrast between art and commerce can be almost comical.

Does the symbolism of a work of art change when placed beside such consumerism? Can high art ever really be separated from commerce? NorthPark seems to invite such questions. Or maybe they just have rich patrons and rich people like nice things to look at.

Now, when you walk into NorthPark with a 7-foot NBA player who’s in town for two days, you might realize that not everything—or everyone—fits inside the boxes you might want to put them in. It becomes clear that none of those surface-level questions of contrast have any real answers. 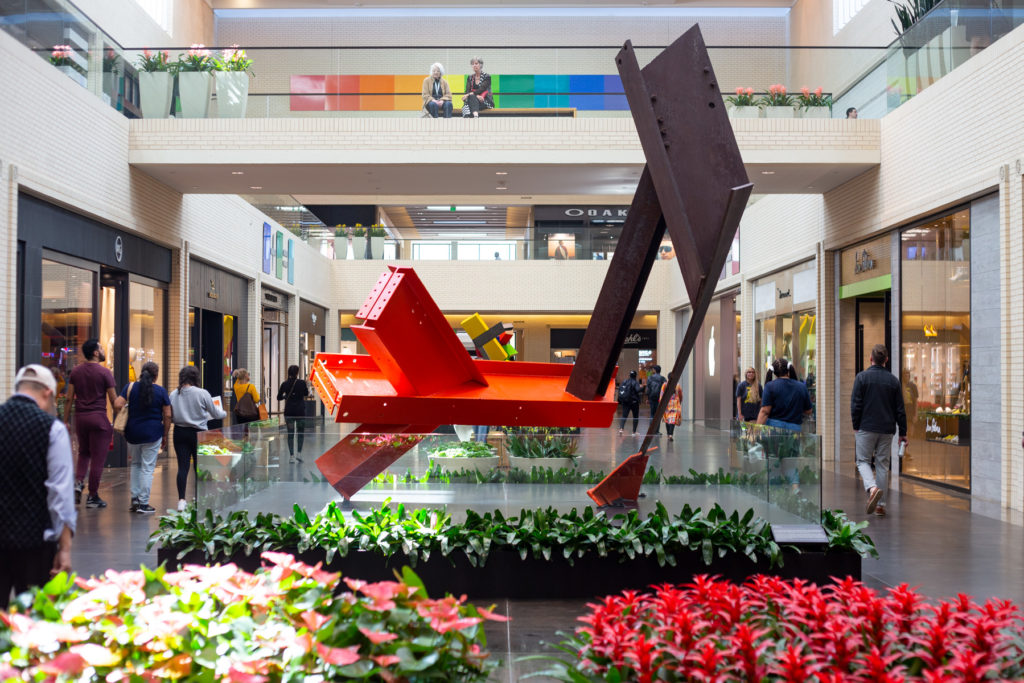 Willie Cauley-Stein is a 25-year-old center for the Sacramento Kings in his fourth NBA season. When he showed up to NorthPark Monday, the day before the Kings’ matchup with the Dallas Mavericks, he was there to check out the art. See, Cauley-Stein is an artist himself. As a kid, his wardrobe was how he expressed himself. “I would wear the craziest combination of clothes, but somehow it worked,” he told me. “You can’t really control who you are. You are who you are. I felt like as soon as I accepted who I was I started getting real inspired.”

This is the logic of a young creative, so his grandmother enrolled him in an art class. From junior high through college, he took an art course every year. He was always drawing, but eventually school tends to start feeling like school. The lessons become mandatory memorization requirements. “I never applied them to my work or anything. It was just like ‘yeah I have to do that to get this A.’” Plus, he was blossoming into a basketball star.

The art students at the University of Kentucky, where he attended classes for two years before declaring for the NBA draft, were more deliberate and advanced with their work. He noticed intention and techniques that weren’t present in his own. While in the league, he started watching videos of Bob Ross, famous for hosting PBS’s The Joy of Painting in the 1980s and 1990s, who has remained relevant as an Internet avatar for generally optimistic vibes. Ross taught him techniques that could bring layers of perception to his work. “Once I opened up that door, it was like I could paint anything. With those techniques you can make anything come to life.”

Taylor Zakarin, NorthPark’s manager of arts programming, gave Cauley-Stein a tour of the shopping center’s sprawling art collection. She explained that each piece was more than it appeared on first glance. Despite frequent interruptions to take pictures with shoppers, Cauley-Stein was an attentive student, only interjecting occasionally with a question or a quiet “Oh, that’s dope.” It was a lot of information to take in and he was processing as much as he could at once.

“I don’t know [the work] of that many artists,” he admitted. “That’s why I think it’s so important to check this stuff out when I’m in all these cities.”

When we approached a collection of Andy Warhol screen prints displayed far above us, he noted that he had recently seen pieces from that same series at the Whitney in New York.

Cauley-Stein took it all in with a combination of wonder and knowledge he could bank for his own career as an artist. He marveled as he stood underneath a work by Chilean artist Ivan Navvaro. It seems from the outside to just be replicas of small wooden water towers, but it uses double-sided mirrors to appear as though it’s hundreds of feet tall when you look up from under it. “Watch your head,” Zakarin warned as we moved forward. “We’ve never had to say that to anyone,” her colleague, Anna Kern, whispered to me.

You could see his focus tighten when Zakarin touched on practical details like the type of paint or materials the artists used and why they chose them. Cauley-Stein is not an art collector. This is an important distinction. He certainly has the means to become one, and he says that time will come, but right now he’s not as interested in trying to purchase cultural currency as he is in discovering what he likes. He told me that he wasn’t seeing the works in our tour through the eye of a collector but the “eye of an artist.” His internal dialogue included thoughts like “What would I have done differently?” or “Wow, I probably would have tried to do that the same way.”

Cauley-Stein thinks often about the day when his work—which currently ranges from landscapes to symbolic commentaries on fashion and consumer culture—will be ready to be shown in a gallery of some sort. When I asked him what he thought about the concept of his art being placed next to a Nike Store or a Chick-Fil-A, he paused and smiled. “A lot of traffic,” he said. “A lot of people going through there. A lot of people seeing your stuff. That’s a big platform to have it in front of these stores. People are seeing it, and people are taking note of it.”

As we passed store after store, Zakarin explained that Barry Flanagan’s Large Leaping Hare, a gilded bronze sculpture of a rabbit, was placed in front of a couple children’s stores because, well, kids like rabbits. A cynic might say this strips the work of its deeper meaning. Others might say the work is being seen and appreciated at an instinctual level. Cauley-Stein was more concerned with straightforward questions. Sculpture is a medium he’s inexperienced in and the “how?” is more urgent to him than the “why?”

To him, the mall setting is “dope.” NBA players have disposable income and a lot of time to kill in cities they’re unfamiliar with, so many of them have been to their fair share of shopping centers (we ran into his teammate Harry Giles—”that’s my guy”— during our tour). “I’ve been here before. I’ve walked through it,” Cauley-Stein said. “I’ve seen what they had displayed, and I never really realized that it’s a museum. It is a museum. Even the way they have it set up when you’re walking in it reminds me of a museum.”

If it’s a museum, then it’s one of the most visited museums in the world. NorthPark averages 26 million visitors per year. By comparison, the Louvre averages just over 10 million. To Cauley-Stein, that’s a lot of people to speak to through art. “I feel like a lot of artists just want to be felt,” he said.

He has a tendency to shift between speaking of artists as other people and including himself in that community, sometimes within the same sentence. “They want people to come across [their art] and get it without us having to talk. That’s the most special shit; to understand it like a language without words.”

So you could argue that Willie Cauley-Stein staring at a Michael Dean sculpture 20 feet away from a Sunglass Hut is pushing the boundary of the collisions that can result from those contexts. That equation only means something, though, because Cauley-Stein has a general appreciation for what he’s looking at. Standing 7 feet tall, with tattoos crawling from his body to his arms to his face, and famous to much of the world for dunking a basketball, he carries more sincere interest in the art at NorthPark than many of the wealthy North Texans who visit its shops (and while it’s beside the point, he probably has more money than 99 percent of them).

When Zakarin and I parted ways with Cauley-Stein, he hung back. He had some shopping to do. He also said he wanted to get one more closer look at some KAWS paintings we had viewed from afar. The next night he would score 16 points and grab seven boards in a win over the Mavericks on his way out of Dallas.

Sometimes art is a vehicle by which we can see contrasts. Sometimes it’s an invitation to look past them.
View Gallery