Enjoy unlimited access to all of our incredible journalism, in print and digital.
Subscribe Now
Advertisement
Competence

The recent news that Dallas/Fort Worth International Airport is finally going to stop prohibiting arriving passengers from using Uber & Lyft was greeted with great fanfare by long-suffering victims of the taxicab cartel. As promised by D/FW Airport CEO Sean Donohue earlier this year, the new procedure was going to be simple: “1. book your ride; 2. take your ride.” As long as the driver held a sticker issued by either Dallas or Fort Worth (the two cities that own and theoretically control the $7.5 billion nation-state), he or she would be good to go.

Sure enough, a closer look reveals the “new procedure” is anything but simple.

First of all, it appears that without notice to, or discussion with, the city of Dallas (the 64-percent majority owner of the airport), D/FW instituted a requirement for a second window decal, to be attached along with the City of Dallas or City of Fort Worth decals that were already required as a prerequisite for operating at the airport. Not only that, drivers were required to pay $20 for the privilege of having this redundant sticker placed on their private vehicles.

The problem with this requirement is that it is at variance with the authorizing resolutions passed by the D/FW Airport Board on May 7 and the city of Dallas on May 12, which stated that they would “(r)move DFW Airport from issuing driver permits for taxicab or pre-arranged drivers,” and “eliminate redundant permitting fees and administration.” These additional financial, logistical and aesthetic (many part-time drivers don’t want stickers plastered all over the windshields of their private vehicles) hurdles will mean that only a certain subset of Uber & Lyft drivers will decide to become DFW Airport “certified.” 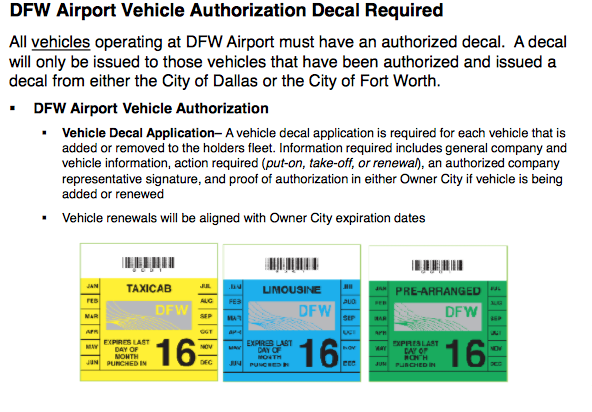 The reason for the apparently unauthorized retrade: “This is not a permit, but our visual cue that a transportation for hire vehicle has been entered into our system and is familiar with the operating complexities of DFW.” Errr… ok, you have to slap another decal on your private vehicle, but it’s not a permit. Got it. And it’s to certify one is familiar with the “operating complexities of DFW.” Wait… what “complexities”? And why can’t the City of Dallas or City of Fort Worth sticker serve as “a visual cue?”

Reading further, I find that all pre-arranged services will be staged in a “Hold Lot,” located in the Terminal B infield parking area. So, what’s the problem with that? Well, D/FW Airport is huge, and the roadway configuration isn’t designed to provide for easy access between terminals. Let’s consider a hypothetical pick-up of a Delta passenger by an Uber or Lyft driver:

Under the first scenario, above, a driver would simply drive to the terminal and wait in a designated area at the terminal for a request. Under the second scenario, the driver has to go to a random, out of the way lot, to wait. I guess that’s the complexity — a needless, wasteful intermediate step. The driver is required to drive 2.9 miles out of his or her way and waste 8 minutes in the process. And why the $20 fee? To cover “enforcement costs,” according to Donohue.

There’s another aspect to this. Assume you are a tired, arriving passenger who has just retrieved your bags. You have a decision to make: 1) you can hop in a cab, which is staged at the curb directly in front of the airport exit; or 2) you can request an Uber or Lyft, which is going to take several minutes to arrive, since they have to drive to the pick-up area from the remote lot. Why not allow Uber & Lyft to stage at individual terminals, along with the taxis? Maybe not at the curb, but at individual infield lots? And whatever the system, just give drivers a one-sentence explanation at the time of obtaining the Dallas or Fort Worth permit? “Drivers wishing to pick up passengers within the confines of D/FW Airport must first [insert desired bureaucratic procedure], to await being hailed.” Boom: familiarization with “operating complexities of D/FW” Airport solved.

This might not seem like a big deal on a one-off basis. But consider that more than 800,000 taxi rides originate at D/FW Airport each year. Let’s say Uber & Lyft have the potential to capture half of that. Assume that, on average, the length of the Terminal B detour is only 1.5 miles (the above 2.9 mile detour example is based on Terminal E, the farthest drive). That still means 600,000 miles in needless road miles being driven each year to comply with a redundant bureaucratic procedure. Even worse, for drivers who don’t jump through the bureaucratic hoops associated with becoming D/FW Airport-certified, they will continue to be forced to “dead head” the 20+ miles back to Dallas or Fort Worth.

How does that comply with the airport’s stated goal of embracing sustainability? 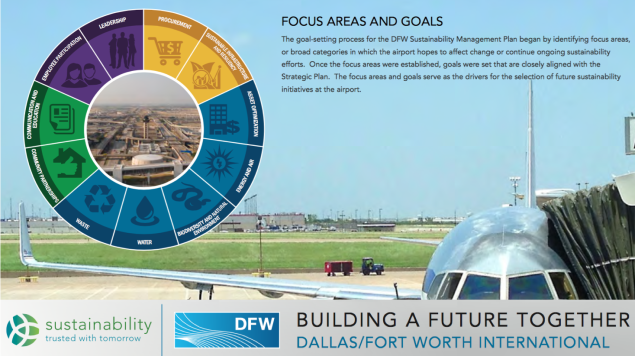 Hundreds of thousands of miles in wasted driving, along with excess air pollution, needless inconvenience for customers and drivers? Surely we can do better. And, again, why is D/FW Airport doing this in light of what it told the cities of Dallas and Fort Worth (the airport’s owners)?

Am I being too sensitive here?
By Tim Rogers
Local Government

The state agency is highlighting the project's plans to restitch the street grid between downtown and the Cedars as well as the land it would free up for development.
By Matt Goodman
Local Government

The warming begins, just as we begin to assess the damage.
By Matt Goodman
D Magazine Directories