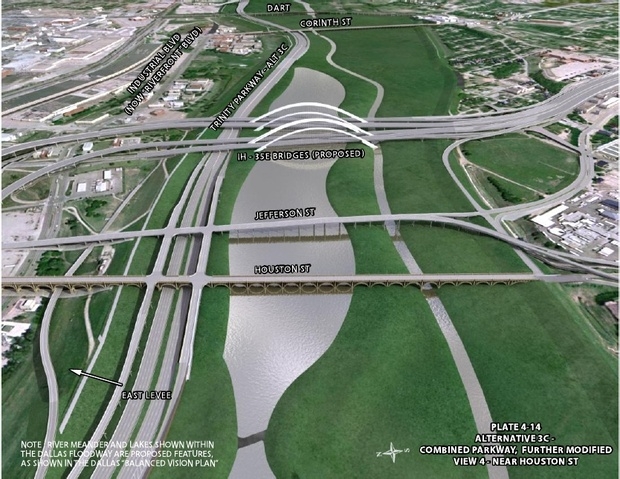 As Tim pointed out in Leading Off, there is some tremendous reporting in the Dallas Morning News today from transportation writer Brandon Formby. In his article, Formby lays out the entire chronology of the efforts by former City Manager Mary Suhm and Trinity Commons Foundation Executive Director Craig Holcomb to save the Trinity Toll Road project in the face of mounting opposition. The report comes ahead of today’s private luncheon reveal of the so-called Dream Team’s reworked vision for the road.

The piece pulls back the curtain on just how power brokers have pressed their influence on the mayor, rallying financial support for the pro-road effort, editing his op-eds, counseling him with misinformation or half-truths about the essential features of the road, and coming up with the idea of the dream team and setting the parameters of that groups’ deliberations.

Throughout Rawlings looks like a mayor with scant command of the facts surrounding the Trinity Toll Road, continually professing a lack of knowledge or a shortage of answers, while relying on information fed to him by the pro-road contingent. He is constantly playing catch-up as the ball is kicked down the road by Suhm, Holcomb, Assistant City Manager Jill Jordan, and their backers.

Laying out facts against false assertions and letting the contrast speak for itself, Formby’s piece creates a portrait of manipulation and orchestrated confusion. The most revealing section deals with how Jordan misleads the mayor by portraying a false comparison between the road in the Balanced Vision Plan and the Trinity Parkway:

Jordan’s analysis and notes gloss over some factors that fuel opposition to the current project. . . .

One key factor not addressed by Jordan’s analysis is the earthen shelf supporting the road inside the levees. That is what moved into planned park space and won’t shrink even if fewer lanes are built.

Jordan’s document for the mayor also indicates that the current design caps the toll road at six lanes. Trinity Parkway does still have six main lanes. But portions inside the levee are designed to be eight to nine lanes wide at some points to accommodate drivers entering and exiting main traffic flow. Those lane counts would be higher if ramps, shoulders and a maintenance road were included.

“Jill showed me the math of both of them and they were kind of similar,” Rawlings said.

Rawlings had Suhm, Holcomb and Jordan review an opinion piece he wrote about the project for The News, according to emails provided by Kingston. Jordan suggested he change a statement that the road sent to authorities is “fundamentally” what voters approved to say it is “essentially” the same.

“I don’t have the history as much as the three of them,” Rawlings said.