Does Mike Rawlings Know He’s the Mayor of Dallas, Not Dallas-Fort Worth?

The other day, a new post from Dallas City Hall hit my Facebook feed: “Have you seen our 2014 Annual Report? Tell us what you think…”  Being duly instructed, I proceeded to open the link to the 2014 Annual Report, so I could tell (them) what (I) think. 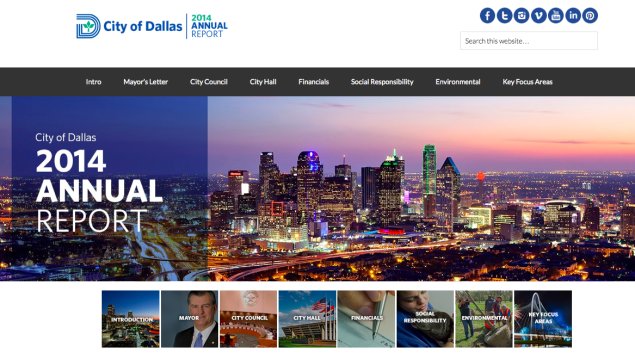 I’m no internet specialist, but this looked really slick and promising: a whole new website, dedicated exclusively to the city’s annual report. Cool sans-serif graphics, flat, modern, snazzy pics. Nothing at all like the city’s primary website. I’m guessing they decided to fly solo on this because the City of Dallas website is a chaotic mess.

It was hard to know where to start. After downloading the entire document, I decided to page forward to the Mayor’s Letter, which is also featured prominently on the home page of the futuristic electronic document version. The letter didn’t disappoint: lots of good stuff going on in Dallas in 2014 … big stuff … WORLD CLASS stuff! Given the Mayor’s background in marketing, I wasn’t surprised to see a lot of general, boosterish claims: “it’s quickly becoming one of the best places to live in America,” “our city is stronger than it was a year ago, and it’s growing stronger by the day,” “2014 was a downright vibrant year,” etc.

But there was more than that. After all, as Rawlings told the Dallas Morning News editorial board recently, he’s “a numbers guy.” So anchoring all the puffery was one solid factoid: “According to a recent Forbes study, Dallas is now the fourth fastest-growing city in the country.” Wait, what? I mean, without even checking, I instinctively knew that wasn’t true, not by a long shot. What was this claim doing in the middle of the mayor’s letter? I had to get to the bottom of this.

So, let’s see. Let me Google “Forbes,” “Dallas,” and “fastest growing.” Less than a second later, I’m reading this (the first sentence under “Behind the Numbers”): “To cull our list, we began with the 100 most populous Metropolitan Statistical Areas (MSAs) in the U.S., geographic areas designated by the U.S. Office of Management and Budget that include cities and their surrounding suburbs. We rated these places…”

Aha! I immediately see the problem. This article isn’t about cities at all, it’s about “Metropolitan Statistical Areas,” which are described as “geographic areas designated by the U.S. Office of Management and Budget that include cities and their surrounding suburbs.” (emphasis added) Researching further, I was quickly able to determine that the “city” to which Mayor Rawlings was referring was actually something called the Dallas-Fort Worth-Arlington MSA which sprawls over 12 counties and 9,300 square miles, and contains more than five times the population of the city of Dallas.

Isn’t this kind of like my claiming to be an Olympic athlete because my cousin won a silver medal at Sochi? I continued to dig deeper.

The Forbes piece stated that the ranking was based upon the “estimated rates of population growth for 2013 and 2014, year-over-year job growth for 2013, and the rate of gross metro product growth — a.k.a. the economic growth rate — for 2013,” using data from Moody’s Analytics, and that they “also considered federal unemployment data and median salaries for local college-educated workers, courtesy of Payscale.com.”

What I wanted to do was compare relative metrics for the MSA and the city of Dallas. Unfortunately, population growth was the only statistic relating to both areas that was readily available, courtesy of the U.S. Census Bureau. To be fair, I limited the ranking to larger cities (those with populations of 250,000 or greater). What did I find? 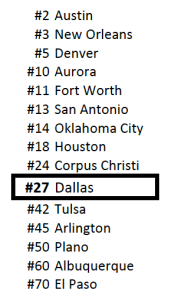 Flipping to the next page, I came to the City Manager Letter, a low-resolution page that contrasted starkly with the remaining document’s slick production values. 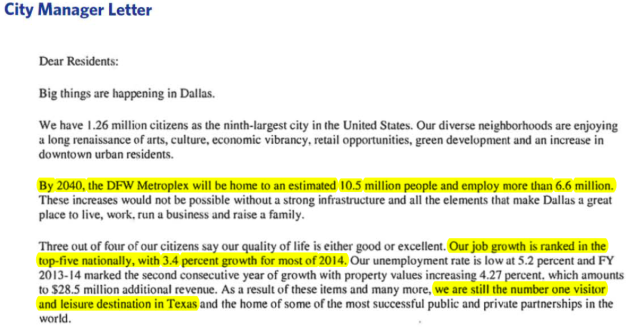 As can be seen, A.C. Gonzalez also focuses on the metropolitan area rather than the city. Checking the “top-five” job growth claim, I immediately hit upon this report from an Arizona State University economist and confirmed that the author is referring to “cities and surrounding metro areas.” And the fact that he is referring to the Dallas-Fort Worth-Arlington MSA is easily verified by clicking through to the underlying data. As to the implied claim that the city of Dallas is “the number one visitor and leisure destination in Texas,” well… again, not true. It is the metro area that is the No. 1 visitor destination, not Dallas proper.

Interestingly, the City of Fort Worth makes the distinction clear on its website.

So, back to the original request: “Tell us what you think…”

The leaders of this city oversee a $2.8 billion annual budget. How can those resources be allocated efficiently if we don’t have a clear picture of the city’s relative economic health? Where is the economic data relating to the health of the city of Dallas? How do we stack up relative to other North Texas cities, the region, and the country? That is what we need to know to be able to make a proper assessment as to the success (or lack thereof) of municipal leadership.

When can we expect to be provided with such an analysis?

Am I being too sensitive here?
By Tim Rogers
Local Government