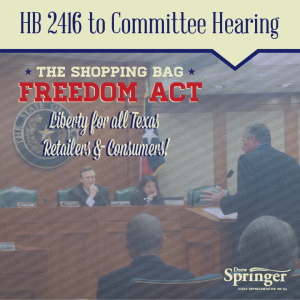 The act, in part, reads:

A business that sells an item to a customer may provide to the customer at the point of sale a bag, package or other container made from any material.

An ordinance or regulation adopted by a local government purporting to prohibit or restrict a business from providing to a customer at the point of sale a bag, package or other container made from any material is invalid and has no effect.

Springer said reusable bags pose a serious health risk that could end in illness, or even death. He told the Observer that there are studies that show rising sickness due to E. coli and salmonella where the bag bans have implemented.

The study he cites is “Grocery Bag Bans and Foodborne Illness” by University of Pennsylvania researchers Jonathan Klick and Joshua Wright, which contends that when San Francisco banned plastic bags, cases of salmonella and E.coli rose 47 percent in the county. The assertion was that bag-users were washing the bags, and the salmonella and E.coli were jumping all over their turnips. Stunning, right? Makes me want to throw away all my reusable bags, open an oil refinery, and start churning out some old-fashioned plastic guys.

But wait. Last month, UC-Berkeley epidemiologist Tomas Aragon released his own report, which should’ve been titled “Yeah, but…” but instead didn’t really have a name. In his study he found that while salmonella and E.coli numbers did rise, it was impossible to connect the rise to the reusable bags unless Klick and Wright were able to determine it was the reusable bag users that contracted the illnesses. And that would be impossible.

Springer’s set to argue the bill tonight before the House Urban Affairs Committee.