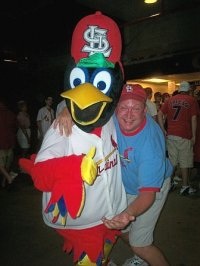 (This is the last of four mini-profiles of the semifinalists of theÂ D Magazine Words With Friends Tournament. Chris Cree will face Rich Goff in one of our two semifinals on June 9. Read to the jump to see this member of our Finally Four answer the same questions as our 10 Most Beautiful Women in Dallas nominees.)

Originally from Joplin, Missouri, Rich Goff has been marketing news, weather, sports and online products for television station WFAA since 1999. He’s passionate about three things: the music of Bruce Springsteen and the E Street Band, University of Missouri athletics, and the St. Louis Cardinals.

He got hooked on Scrabble because of semiannual games against his wife’s grandmother. They play for hours every Christmas and Thanksgiving. Usually Goff wins, but not always. He’s been playing WWF since he first discovered it, in March. He calls it “a gift from the iPhone gods.”

It was a difficult path to the final four for Goff, and he considers himself most fortunate to have survived his bout with D Magazine senior editor Zac Crain. He really doesn’t think he had any business winning that match. I imagine that Zac would agree.

People say your best feature is your:

My wife likes my eyes.

Randy Quaid.Â  I mean, look at my photo.

Playing Words With Friends, or looking at classic cars on eBay.

My own back porch, or we’re over at some friends’ house drinking a Dewar’s on the rocks.

We’re usually either grilling out back, watching movies, or having friends over.