Forbin's service at The French Room has impressed Dallas for decades.
By Nataly Keomoungkhoun | October 27, 2022|10:28 am
Advertisement

In 1985, Connie Forbin took a bus to downtown Dallas and got off at a stop in front of the Adolphus Hotel. She had a bit of extra time to spare before she had to report to her job at a nearby daycare, so Forbin wandered into the hotel.

From the minute she stepped inside, Forbin knew she had to find a way to stay. With its giant chandeliers and ornate tiled floors, the Adolphus was just as grand and majestic as Kensington Palace to the Wichita Falls native.

“I’d never seen anything like it, even in a magazine,” Forbin says.

Thirty-seven years later, she still marvels at the hotel’s furnishings and floor-to-ceiling windows as she walks through the building and into The French Room, where she’s worked for decades.

She first landed a job at The Grille (later called The Bistro, now City Hall Bistro) in 1985 and moved to The French Room in 1995, where she acts as a captain who oversees service for 11 tables in a part of the restaurant. She says it’s her responsibility to make sure guests have an “impeccable” dining experience.

Many of those guests ask for Forbin by name. Children have gifted her drawings. She keeps four decades’ worth of praise and handwritten letters in a giant binder. They’re little reminders of her career, she says—not that she needs it.

From memory, Forbin can recall specific guests and where they sat inside The French Room. She remembers the time a quiet, older gentleman perched a kiss upon her cheek after she waited on him and his niece during dinner. They were a group of three and sat at table two. She has a way of attracting interesting clients, going back to her time at The Bistro. Huttish Muringi, the general manager of Air Zimbabwe, sat at booth 14 every time he dined. Forbin waited on him every day he was there, taking note of the bodyguard who was always in tow.

“At the end of his stay, he went to our general manager and said he was so impressed with the service,” she says. “So, he flew us there.”

Forbin and two of her colleagues were flown to Zimbabwe for three weeks in 1994 to help train the airline staff about guest interactions and customer service. She says her hosts treated her “like royalty.”

Forbin is part of an unusual group of people within the restaurant industry. A lifelong career in restaurants is common for restaurateurs, chefs, and general managers, but it’s far less common for the people who serve—it’s especially rare for those folks to stay in one place for nearly four decades. 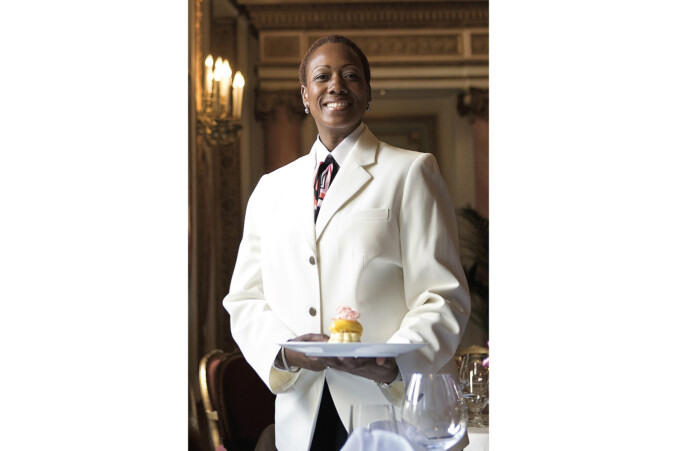 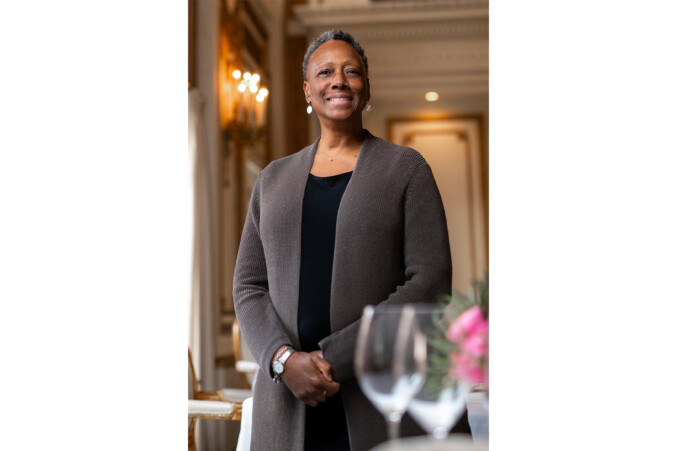 Connie Forbin in a July 2005 issue of D Magazine.
Forbin in The French Room in October 2022.

Serving has been a nearly lifelong venture. It started when she was 16 or 17 years old, after landing her first job at a Long John Silver’s on Maurine Street in Wichita Falls. She walked there every day and worked as a lobby attendant and filled condiments, polished windows, and cleared tables.

Next came a stint at Levi Strauss & Co., where she sewed pockets and flies onto jeans. She soon was pulled back into restaurants, working as a hostess at an El Chico. She worked at a few more restaurants before moving to Dallas in 1984 and landing a gig at a daycare.

Then came the day she strolled into the Adolphus Hotel. She ventured into The Grille and applied for a waitressing position. A few days later, when she interviewed for the job, Forbin caught a glimpse of The French Room.

She didn’t step inside—she peeked through the French doors. At the time, cherubs were painted onto the ceiling, heavy velvet drapes lined the windows, and the tables were set with perfectly folded napkins and crystal-clear glasses. She remembers rays of light coming through the doors and hitting her face.

Forbin turned to the hiring manager of The Grille, leaned into her hip, and gestured with a hitchhiker’s thumb toward The French Room.

“I said, ‘I would love to work there one day,’” she says. “And he told me, ‘You’ll never work there because there are no women.’”

Forbin said it was an acceptable answer for the time—she was just grateful to be in the hotel.

Her shifts at The Grille started at 6:30 p.m. She would try to arrive about 30 minutes prior when she could. She didn’t have her own car, and when she took public transportation, it would sometimes mean that she would be late. Another worker noticed her being tardy and ratted her out, she says. Forbin was suspended for three days.

“I had to go back and get my personal belongings. I felt like everybody knew because they just all scattered when I came back,” Forbin says. “Those three days that I was suspended, I took a menu home with me and studied.”

The work paid off. Six weeks later, Forbin was awarded the Adolphus Star, a recognition for hotel workers that came with $300 and bragging rights. She would win countless Adolphus Star awards, and in 1992, she was named employee of the year.

Donohue, the former French Room maître d, says he was asked to lead a few service training seminars at The Grille. To help staffers, he would often eat a few meals a week at the restaurant. He requested that Forbin wait on his table, which made her nervous, she says.

But it went well, according to Donohue. He saw Forbin’s potential.

“She had those intangibles you just can’t teach, and I saw in her somebody who could help me achieve what I was hoping to achieve in The French Room, and that was an elevation of service to be the best in the country,” he says. “It doesn’t get better than Connie Francis Forbin.”

Forbin remembers her first month at The French Room. In her white tux jacket and black slacks, she felt obligated to be as formal as possible. But she came off as rigid, and Donohue noticed. He asked her what happened to her personality, and when she realized she could be herself, “it just took off.”

“There was laughter,” she says.

But it wasn’t always like that. Forbin was the first Black woman employee working on the floor of The French Room. Donohue also hired her as a captain to oversee service in a section of the restaurant. Typically, employees start as bussers and move up to a waitstaff position before becoming a captain.

That leap was significant for Forbin, but her promotion was met with slight resistance—not from guests, but from within The French Room staff. Sometimes her tools—a wine opener, pens, or a lighter used for birthday candles—would go missing.

“Little things like that would happen,” she says. “I remember one of them would bump into me, and I thought I came too close to him. Then I realized, ‘this is intentional.’”

Forbin stuck around because Donohue wanted her there. He didn’t tolerate disrespect from within The French Room, Forbin says, but Donohue would often critique her work. Sometimes, she would leave the restaurant in tears.

Donohue says he knew that Forbin was frustrated, but he believed her abilities as a captain were God-given. And the guests noticed. When she first started, a woman came up to Forbin, turned to her husband, and said, “I told you there’s a woman in this room.”

In her binder of letters are notes Forbin has collected over her 37 years of service.

From day one you have been amazingly thoughtful and kind to me.

We would like to especially acknowledge Connie Forbin for her warm and personal service.

This evening may or may not be the last time we are able to enjoy each other’s company … let’s hope that it’s not!

The last letter was written in 2016, right before The French Room closed for renovations. Forbin stayed to help the sommelier pour out the rest of the wines. She watched the tables be stripped of their cloths and the lights dimmed. Many employees left for good, including Donohue.

Forbin says she walked home, cried, and sat on the sofa for three weeks watching Fraiser. It felt like a dream that had come to an end.

She moved to Frisco to manage Tupelo Honey Southern Kitchen & Bar. The company flew her out to North Carolina for training, but she left after about two-and-a-half months. There wasn’t much that could compare to working at The French Room.

The French Room reopened in October 2017, and a new team was brought in to welcome Dallas back to its most opulent dining room. The newly designed French Room looked different. The cherubs on the ceiling were covered in white plaster. The guests began to ask for Forbin, only to be told that she wasn’t there.

The new management reached out to Forbin to see if she would be interested in coming back. When she went in to see the new waitstaff, the service felt stiff, Forbin says, like how it was when she stepped into The French Room back in 1995. It was déjà vu.

She took some time to think about it. Would it be the same without her old team? Without Donohue?

Forbin came back to help with the tea service for a few weeks. When she started, she met another captain named Jillian, who shook Forbin’s hand and thanked her.

The French Room’s tea service waitstaff today is a group of 10 people, six of whom are women. Forbin says with a smile that her team keeps her young and motivates her to continue learning.

Donohue says he misses watching Forbin in action. He remembers feeling a sense of pride when a guest complimented the service or spoke highly of her.

When you see her, you’ll know: Forbin moves around The French Room topping off teacups or popping bottles of champagne. If something on the menu is confusing, Forbin leans over and carefully explains the item. She floats from table to table, making people feel important, special, welcome.

“That’s what we did, and that’s what she did,” Donohue says. “Nobody was better at it than her.”

Forbin worked dinner service until the pandemic hit. The French Room closed in March 2020 and reopened for tea in September 2020. Forbin has been working the tea since then, a service that she hopes she can continue for years. Retirement isn’t in the cards.

“I haven’t even thought about it,” she says. “There’s still tea to be poured.”

Connie Forbin’s Guide to Being a Good Restaurant Guest

Is the customer always right? That’s debatable. It helps to follow these basic rules of etiquette.
By Nataly Keomoungkhoun
Drinking