At 4:52 p.m. Friday, June 4, a line of about a dozen people had queued on the sidewalk of Throckmorton Street outside of Sue Ellen’s. “We’re ready! We’re ready!” they shouted, the line growing with every passing minute. “Let us in!”

One person watched the clock. “Eight minutes!” then “five minutes!” they reported, to the call and response of woos and yeahs. At 5 sharp, Kathy Jack unlocked and unlatched the glass doors at Sue Ellen’s, the lesbian bar she’s managed since 1989 (both the original location and the current one when it relocated here in 2007). For over 30 years she has presided over what is believed to be Texas’ oldest lesbian bar—the only one in Dallas, one of the very few in the state, and one of just over a dozen left in all of the U.S.

That Jack, a 63-year-old matriarch-type of the local LGBTQ community, can swing open the doors again, the very ones she shuttered last June due to the pandemic, is not a moment lost on the lesbians, gay men, trans folks, and genderqueer patrons of every stripe and shape who were waiting for Sue Ellen’s revival.

“Sue Ellen’s was one of the first bars I came to in Dallas [after] I moved here from Oklahoma… I’m a transgender male and I fit in most in the lesbian crowd versus the gay male crowd,” said one regular who was happy to be back. “This is important to a lot of us. This is a homecoming for me. It’s a homecoming for a lot of people who want a safe place.” 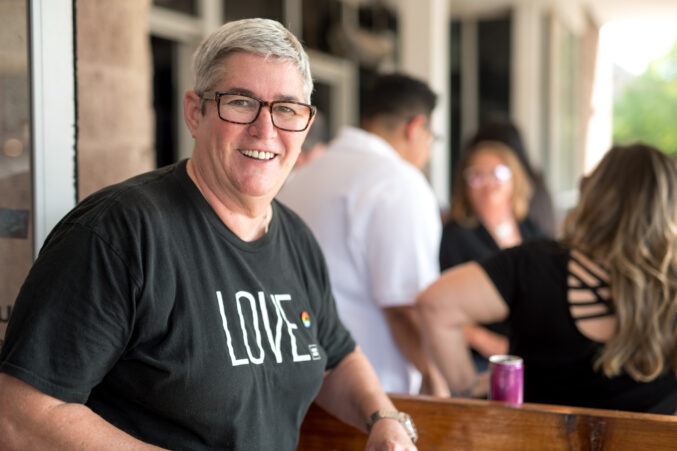 “Welcome home,” Jack greeted, as people danced into the doorway to the tune of Chaka Khan belting “Ain’t Nobody” through the speakers above. “It feels so awesome and so it’s just nice to have it open again,” Jack said, adding a “hello” to every person walking into Sue Ellen’s. “They’ve been waiting for an hour to get in—a year and an hour.”

Inside, people were already bellied up to the bar or cozied in booths (or playing life-size beer pong with volleyballs and faux red Solo cups the size of garbage cans). A Sue regular since back in the day, Karen moved back here from Philadelphia in May and had been waiting ever since for her old stomping grounds to reopen. She’s made a lot of memories within these four walls. “Some we don’t wanna know! Some we wanna forget!” she laughs.

At the bar, someone who would frequent Sue Ellen’s three times a week (shout out free pool on Tuesdays!) is likewise happy to be back. Another person noted how important it was to have this space again: “For us lesbians, we can finally have our own place that we can call our own.”

Longevity is important to Jack, who says the secret to running Sue Ellen’s now that she’s in her sixties is listening to the younger generation about what what events to do and how to ensure the bar continues to support the community. “I probably won’t be here much longer,” she said, “but Sue Ellen’s will be and I want it to live as long as it can.”