Corey McCombs, Jason Roberts, and Amy Cowan set out to capture the essence of New Orleans with Revelers Hall, which opened this past March in the Bishop Arts District (412 N Bishop Ave.). The small, shotgun-style bar certainly feels like it would fit right in tucked off Bourbon Street. Unlike almost anywhere else in the city, this place does not feel like Dallas.

“Jason has been pining for a music spot in Bishop Arts for years,” says Cowan. “We had Brooklyn [Jazz Cafe] back in the day, but once they left, there was a void for activity to balance out the dining and shopping. Over the years, we’ve been to a handful of great spots that really spoke to us, like La Caveau de Huchette in Paris, and Spotted Cat and Preservation Hall in New Orleans. We took parts of what we like about places like them and married it to create Revelers Hall.” 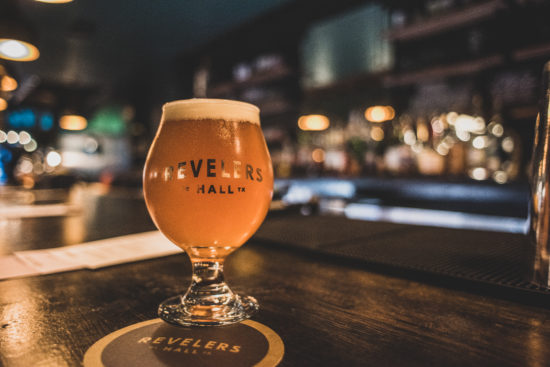 Revelers Hall feels  Preservation Hall-esque except with comfortable seats to sit on, cocktails, food, and on-site restrooms, none of which can be found at the world-famous jazz club. Classic cocktails including Old Fashioneds, Negronis, daiquiris, and Boulevardiers are mixed on-site while food comes from nearby Oddfellows, which shares the same ownership.

Roberts’ wish to “bring top-notch music and a nightly celebration to Bishop Arts” has been fulfilled, thanks in large part to the immensely talented house musicians comprising the Revelers Hall Band. Even if you didn’t know this place existed, once in the district, it’s nearly impossible to not hear the joyous music wafting out from the bar’s front doors. The band marches through the space on the regular to collect tips or get people on their feet dancing. (There’s a $5 per-tab auto charge when bands are playing.)

“When we were putting Revelers Hall together, we knew immediately that we wanted a house band, not unlike Preservation Hall’s. We reached out to Kevin Butler, Oak Cliff’s most famous sousaphone player, and brought him on to curate the house band, as well as book all of our shows. There’s a familiarity and comfort in seeing your band show up for their weekly shows, because they get to know the space and the audience in a unique way, which really allows for something special to happen,” Cowan says.

The owners’ hope is to record and release the music of the Revelers Hall Band in the near future, but until then, hearing them in person is an experience that simply can’t be beat.

The Fort Worth and Dallas symphonies are welcoming guests back for socially distanced concerts in September.
By  Natalie Gempel
Beauty