From here on out, I’m going to start paying more attention to the junk mail my postman delivers. Because that’s how I discovered one of my favorite new bars in Dallas—at Dickey’s Barbecue Pit. Yep, you read that correctly. Armed with a coupon for “free loaded fries with the purchase of two spirited libations,” my partner and I bellied up to the surprisingly cozy Central Bar inside the original location of the nation’s largest barbecue chain (4610 N. Central Expy).

It was a few minutes before happy hour ended and a small-yet-rowdy crowd was laughing, teasing the bartender, and cheerily making patrons move down a couple bar stools to make room for the two of us. It wasn’t long before I realized that several of these people were regulars—pretty impressive for a place only open a couple of months. It also wasn’t long before I realized why these people loved the bar so much: it feels well-worn and divey. Especially with visible smoke lingering in the air.

Except the smoke you’ll find here isn’t from cigarettes. It’s from slowly burning hickory wood. Some drifting in from the original barbecue pit, located just beyond a window behind the bar. And some coming from the dramatic presentation of smoked old fashioneds, which head bartender Spencer “Squatch” Mahoney was making repeatedly during a recent visit.

Mahoney lit a Barbie-sized campfire on a wooden plank while he mixed together Woodfood Reserve, orange bitters, simple syrup, a Luxardo cherry, and an orange peel before placing the concoction under a glass dome to distribute the flavor. Sure, this isn’t the only smoked Old Fashioned in town, but it’s a great one with proper ice, no less. And the fact that it ties in so nicely to the Dickey’s 77-year history makes it downright charming, too.

Central Bar doesn’t feel cookie-cutter corporate, but affordable, authentic, and unpretentious, despite the Instagrammy showmanship of the signature cocktail.

“Our goal with Central Bar was to stay true to our family roots and create a place where folks want to gather after work. I’m a simple Bacardi and diet or vodka martini, but the team has gone way beyond simple. Spencer, Crystal, Julie and Chris Kelley have taken the craft cocktail meets barbecue challenge head on and are raising the bar—literally,” says Laura Rea Dickey, CEO Dickey’s Barbecue Pit.

Customers can order a drink with their lunch or simply come sit in the bar, or even on the patio, because that’s the best way to experience this new addition. With four beers on tap, lots of local bottled brews, a couple wines from Times Ten Cellars, and a fully stocked bar, there’s something to pair with everything from brisket to banana pudding. In addition to the old fashioned, there are some other signature craft cocktail stand-outs, including a tart hibiscus margarita, the gin-and-blueberry 1941, and a strawberry-mint mule.

As for food, you won’t go hungry even after the restaurant side of the building closes at 9 p.m. thanks to a special menu dubbed “Dickey’s After Dark,” which sounds more like some naughty barbecue burlesque show. But it’s not. It’s a list of fun offerings. A standout: a massive pile of waffle fries loaded with queso, chopped slow-smoked brisket, sliced jalapeños, Dickey’s original barbecue sauce, ranch dressing and fresh green onions. (Snuffer’s, you have some competition.)

Also on the menu: dry-rubbed chicken wings coated in the rib rub. You can also snack on chopped brisket or pulled pork tacos, a brisket grilled cheese, or a classic barbecue sandwich. 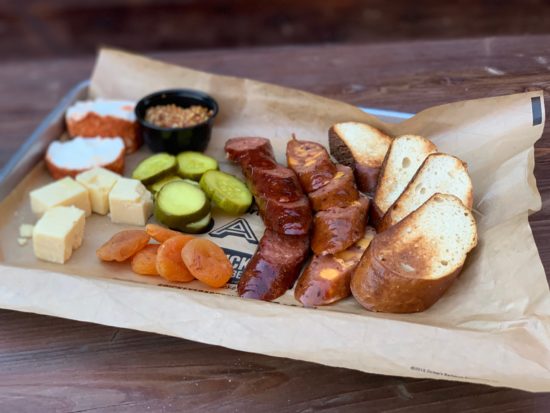 Then there’s the Ploughman’s Plate, a charcuterie board-style presentation of jalapeño cheddar and Polish kielbasa sausages, toasty pretzel bread, chunks of cheddar, slices of goat cheese dusted with the same rub they use for their burnt ends, bread-and-butter pickles, spicy whole-grain mustard, and dried apricots.

A Night Out at Industry Alley