A couple of weeks ago, I was supposed to meet a friend for brunch at SkinnyFATS. It was his suggestion. I hadn’t been, but I received a press release in late March that said the following:

SkinnyFATS, one of the most beloved restaurants in Las Vegas, has expanded beyond the Nevada border into Dallas. Now open, SkinnyFATS is celebrated for its one-of-a-kind, two-sided menu featuring ‘Happy’ indulgences and delicious, ‘Healthy’ alternatives. SkinnyFATS is proud to make Texas its new home and brings the same crave-worthy recipes from Las Vegas, plus never-before-seen dishes to celebrate the new location.

Well, not five minutes before pulling up to the West Village on a Sunday afternoon, my friend texted this:

Can we go across the way to Baboush? This place is giving me a panic attack.

This friend goes out often, so his aversion to SkinnyFATS piqued my interest. What might be so terrible about a fast-casual restaurant?

Before I could place my napkin on my lap and order a Turkish coffee, he spewed: “People were just coming in droves! I’ve never seen so many flip-flops in my life and there is no sand. My blood pressure went up. My head was pounding. There was a line to order. I Yelped to see if Baboush does brunch and saw that they do, so here we are.”

To be fair, this friend is often compared to David Rose from Schitt’s Creek. (If you’re reading this, I’m sorry dude, but it’s true.) For those not watching the hilarious Canadian sitcom starring Eugene Levy and his son Daniel Levy and Catherine O’Hara: he’s a drama queen.

I returned to SkinnyFATS this weekend. Solo.

There was a multicolored mural above the register. It’s an image of a woman with flowy hair. Fruits and veggies are painted on her left side and a giant yellow ‘90s-style smiley face is painted on the right. (Like a shoulder angel and devil. Should she eat fiber? Or should she eat a happy face?)

A giant flat-screen TV displayed the menu, which is separated like this: breakfast, share-ables, between the buns, tacos, juices, soups, and things in bowls. Each section is divided into two categories: a bright yellow one called “healthy side” and a green one called “happy side.”

There were pink cocktails spinning in frozen drink machines, chunky and chocolaty cookies rested in a glass case. There were Edison bulbs and wood-paneled walls, lush green plants and more TVs, lime green tables with purple bench seating and a massive horseshoe bar. There was an upstairs section and a patio. A painting of a yellow smiley-face dude, similar to the one painted above the register, riding a bull. And multicolored LED lights.

It was noisy. Some up-tempo remix of Halsey’s “Bad at Love” played overhead. The dining room was crowded, and people were chatty. I feel like this is such a cliché when it comes to describing noisy places, but there was a crying baby. (Why is there always a crying baby?) The room wasn’t unbearably loud—definitely not at an ear-splitting, blood-pressure-raising decibel—but it was enough to notice.

I wanted something healthy. But I also wanted to be happy. Why did these things have to be independent from one another? If you’re healthy, shouldn’t that make you happy? Indulging can also make you happy. Even if only for a fleeting dopamine-hit. I’m not a fan of the way this menu is laid out. They’re trying to appeal to those who want a half-pound beef patty topped with a dripping fried egg and pepper marmalade but are dining with somebody who is counting calories. But it feels weird.

I decided on an egg-white burrito called the Wrap Supastar and a side of CauliFiRE (yes, that is how it’s spelled).  When it came time to order with the very nice lady at the register, I could feel my face turn an unflattering shade of crimson as the word “supastar” passed my lips. It could have been worse, though. I could have ordered the Pimp Shrimp or the Chickawaffadopolis. 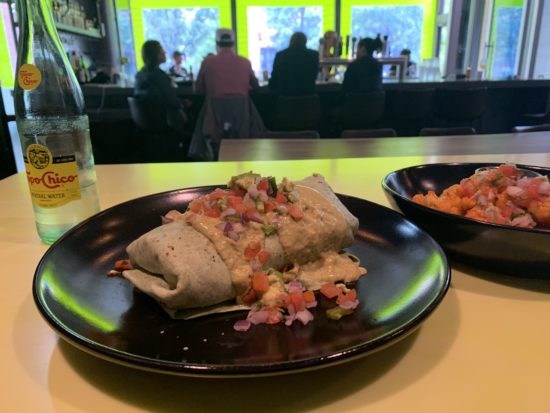 She handed me a number on a metal pole and I slid into a booth. I waited 30 minutes for my meal. I watched men at the bar watch golf on TV and listened to a girl next to me tell her friends how she refuses to buy new clothes because she absolutely must lose weight first. She was eating a sandwich.

The Wrap Supastar came packaged in a spinach tortilla. It was stuffed with tender grilled chicken, egg whites, avocado, and pico de gallo. It was fine. It reminded me of something I get sometimes at the deli in my office lobby. This isn’t an insult to the deli or an insult to SkinnyFATS. Both places serve decent wraps. The CauliFiRE was also fine; a giant mound of warm cauliflower dripping with spicy and puckery buffalo sauce. The portion size was generous, which I guess is a good thing considering this dish is listed under the “share-ables” section.

This place isn’t the best and it isn’t the worst. It’s not ohmygoshsofreakingamazing but it’s also not worthy of dramatically fleeing because it’s unbearable (sorry, friend).

Service was cordial. Portions were large and edible. The space was clean, if a bit noisy. Sure, the skinny vs. fat thing is weird, and probably offensive to some. And regardless of how the menu makes you feel: you can be healthy and happy at the same time. And chances are, if you try hard enough, you could accomplish both at SkinnyFATS.