What To Drink Now: Mendoza

A look at the French wine influence on Mendoza, Argentina.
By Hayley Hamilton Cogill | March 22, 2019|11:00 am
Advertisement

Sunlight streaming through the vineyards of Lujan de Cuyo and Uco Valley reveals the mysticism, which has led winemakers to fall in love with Mendoza. Twelve years ago I traveled to Argentina and fell in love with Mendoza. I recently went back to the region, tasting as a guest of the wineries. I’ll highlight a few of them in my next few posts.

Old world influence has been a constant in Argentina. Like in the United States, Spanish colonizers and missionaries brought the first Vitis vinifera vines to Argentina, ensuring they would have wine for religious services. Then, in the 1800s, European immigrants flocked to the country to begin new lives, some hoping to improve their circumstances, some looking for adventure, some simply bringing their passion to a new land.

When considering Malbec, Argentina’s signature variety, we have the French to thank. French agronomist, Michel Aimé Pouget, first brought Malbec vine cuttings to Argentina, so we begin with a few French-influenced offerings.

Before they had their eye on California, the LVMH group (Louis Vuitton Moet Hennessey) ventured to Argentina, beginning Chandon Argentina in 1959 looking to produce elegant sparkling wines for South America. Thanks to the location in the Andes foothills, Mendoza wines benefit from high elevations, keeping temperatures cool, and long sunshine-filled days to ripen fruit, making the ideal combination of juiciness with acidity, a requirement for vibrant sparkling wine.

With sustainability at the forefront, the winery’s terraced, rocky vineyards soar to elevations from 1800 to 4500 feet throughout Mendoza. With very little rainfall, vines struggle to survive, digging their roots deep into the earth seeking nutrients, delivering robust Malbec and Cabernet Sauvignon with an earthy, concentrated edge. 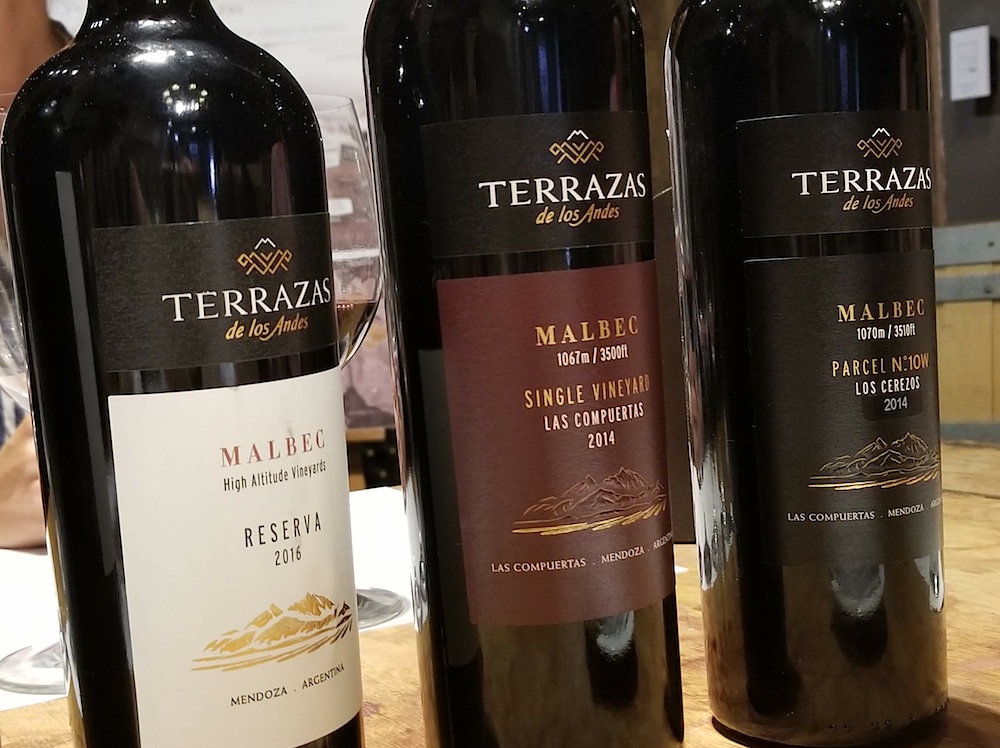 In 1999 Terrazas de Los Andes partnered with Chateau Cheval Blanc to bring the heart of Bordeaux to life in Argentina, mimicking the values of the Saint-Emilion Grand Cru in Cheval des Andes.

Developed by distinguished Frenchman, Count Patrick d’Aulan, whose family has been making wine in France for over 250 years, most notably starting Piper-Heidsieck Champagne, Bodega Alta Vista was one of the first wineries in Argentina to apply terroir-style zoning in winemaking, creating various blocks in the vineyard based in its terroir influence. D’Aulan was the first in Argentina to produce a single vineyard wine, capturing the sense of place in every glass, while working as harmoniously with nature. Alta Vista Alto, crafted using two vines of Malbec per bottle (the Argentine norm is four bottles per vine,) is highly structured, with dried tobacco, black cherry, dark chocolate, and violets.