Catching Up With Mike Snider of AllGood Café 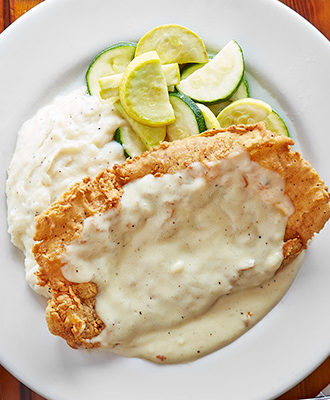 Most of the restaurant news coming out of Deep Ellum these days has been grim. Critically acclaimed restaurants such as Brian Luscher’s Luscher’s Red Hots, Matt McCallister’s Filament, and On the Lamb with talented chef Ross Demers have closed.

Lest you think Deep Ellum is dead, I would like to point out that Pecan Lodge still has long lines, St. Pete’s draws regular crowds, Uncle Uber’s sells a lot of burgers, and Tracy Miller’s Local is approaching its 20th birthday. But the one restaurant that truly represents Deep Ellum is AllGood Café. Here you can find good food and fine music in a well-worn and welcoming dining room.

The owner of AllGood Café is Mike Snider. He’s a concert promoter, music historian, philosopher, philanthropist, and a hard-working restaurateur. AllGood Cafe is getting ready to celebrate their 17th anniversary and roll out of a new menu. I checked in with Snider who took time from his busy vacation in Hawaii to answer my questions.

I wonder how many people who frequent AllGood Café know your history of promoting concerts in Deep Ellum. Give them Mike Snider 101.

In early ‘90s, I was catering for Baker’s Ribs and networking with the Convention Bureau, NACE, and MPI. I would book bands and venues for special events. Driven by my long passion for live music, I thought it would be a good idea to do something different in the live music world in Dallas. I chose Sons of Hermann Hall’s old German dancehall and, starting in January 1994, booked the gypsy-jazz swing guitarist Slim “Two-Tone” Richey and Maryann Price from Dan Hicks’ Hot Licks. Our second show featured the Punk Bluegrass of Austin’s Bad Livers and had the openers of “wet-between-the-ears” Old 97s. Our third show had the zydeco of Zydeco Faux Pas and Cajun fiddles of the Crawdaddies. Our fourth was the Western Swing of Ethyl & Mabel. By the end of the year we had a night featuring many of the Bob Wills Texas Playboys, Lubbock’s Butch Hancock, and Don Walser, the Pavarotti of the Plains.I can’t forget to mention Ray Wylie Hubbard, Junior Brown, and Tex Edwards.

In following years, we hosted legends Ray Price, Hank Thompson and Johnny Bush, the debut of Wilco, Son Volt, Whiskeytown, and numerous Old 97s shows. We had a great time.

I was asked to help with a new venue with the Woods’ brothers at the Green Room and Trees. I joined their group (offered the idea of the name “Gypsy Tea Room”) and became talent buyer for the first 2-3 years of the newest club in Deep Ellum.

Eventually, things got bigger than me and my music and I saw the writing on the wall. I created the AllGood Cafe down the street. I had a little stage and could book my own shows and still book Gypsy Tea Room and Sons of Hermann, too.

How did you end up in the restaurant business in Deep Ellum?

I’ve been in the restaurant, bar, and hotel business all my life. I moved from Pittsburgh to Dallas to work for Marriott. I had a restaurant called Pelican’s in Waco for a couple years and helped the Informart open their catering operation. My friend Brian Hennington was the chef/owner of Deep Ellum Café. His sense of food and taste was ahead of the pack. We hung out and I helped with his catering. We would go to Joe Duncan’s Baker’s Ribs in Pleasant Grove (at the time) for some ribs. Eventually I helped sell and direct catering for Baker’s Ribs. At the same time Jack Chaplin opened Chaplin’s on Greenville and I helped him, and he helped me.

AllGood Café is just my reflection of everything I love: food, music, people, fun, and this neighborhood. It has always been the one that drawn me.

You have some important local culinary influences associated with AllGood. Can you talk about your history with them and how you continue to evolve the menu?

Over half of the initial recipes came from Brian Hennington of Deep Ellum Café. Two of the cornerstone items came from a short-lived café he had on Greenville Ave. called Ruby’s where Little Gus and later Daddy Jack’s operated. Ruby’s served “our” Huevos Rancheros and Grilled Cheese with Roasted Green Chiles and Tomatoes. I also got recipes for our chicken-fried steak and pancakes from Brian. The Salmon Dijon-Caper Cream is from Daddy Jack’s and the Rock Creek Shrimp comes from Matt Martinez’s No Place restaurant. I use Paula Lambert’s cheese. My contributions include the AllGood Texas Chili, the Rock ‘n’ Roll Pork Chop, a crab and avocado salad, the egg sandwich, the borracho biscuit, fried zucchini,and stuffed peppers.

I realize I’m putting you on the spot by asking you this, but give us your opinion of why you think upscale restaurants have a hard time in Deep Ellum.

What’s upscale about Deep Ellum? It’s about the other side of tracks. How about delicious and affordable. Try serving that. Too many people want to turn Deep Ellum into Uptown. Deep Ellum will always have its losers, homeless people, and some crime. The news makes it a big deal and that makes it real hard on everyone in business here. The real Deep Ellum in disappearing.

Do you still have your no burgers, no fries, no TV policy in place?

That’s right, no fries for you! Everybody has a burger and fries. And damn TVs and beer signs. I give people a chance to think and hopefully try­ something else. Too many people eat the same things day in and out: burger, burger, burger. That’s why there’s that obesity problem!

I know. We serve chicken fried steak, but it’s real food and people don’t eat it every day!