What To Drink Now: Livermore Reds

The beauty of Northern California is that you are within a stones throw of great wine all the time, as the region has proved to be so ideally suited for growing vines. Well loved Napa Valley made a name for itself by producing robust, fruit forward and distinct Cabernet Sauvignon that could change characteristics by simply advancing a few hundred feet up the valley. Napa is not the only region that celebrates great Cab in California. From Paso Robles to Alexander Valley to Arroyo to Mendocino there are incredible Cabernet Sauvignon vines planted throughout the state, producing tasty, tasty juice. One area in particular is just about a half hour away from Napa with a laid back atmosphere and an inviting personality, making visitors feel right at home. Livermore sits just 45 minutes east of San Francisco, inland where temperatures spike in the summer to ripen Cabernet vines and create wines filled with good acidity, rich fruit and balanced tannin. And, it is a region that has quality wines at good prices. Here are a few reds I have tried recently from this California gem of an area, a few selections were sent for editorial consideration.  Each wine is available via the winery website.

I am a fan of Steven Kent wines and have written about them a few times since I had a chance to meet with the modest and passionate owner a few years ago. Created in 1996 by Steven Mirassou and his father, 5th generation winemaker, after parting ways from their long established Mirassou Winery.  Steven, who had left his California roots at a young age to become a writer in New York, came home to get into his family business in the 1990’s, especially intrigued by the opportunity to create his own brand with his father in laid back Livermore, always with the belief that he could make wine on the same quality level as those in Bordeaux. His focus when he started was Cabernet Sauvignon, but in recent years has ventured into other varieties as his estate has expanded, like Semillion, Sauvignon Blanc, Merlot and Cabernet Franc. I recently tried the Steven Kent Small Lot Merlot and the Cabernet Franc, which both prove that the land in Livermore is ideal for growing great wine. The 2010 Small Lot Cabernet Franc in particular is delicious. Sometimes Cab Franc can be a little too vegetal and herbaceous; this one had a nice balance of the earthy qualities you want from Cab Franc with red fruit, cedar, white pepper and spice notes, reminiscent of Loire Valley Chinon. Though still a bit young, this is a wine that will continue to improve over the next few years.

James Concannon first brought Cabernet Sauvignon cuttings to Livermore from Bordeaux 130 years ago, believing that the variety would thrive in Livermore after extensive travel, research and study to France. Through challenges like phyloxera, Prohibition and difficult harvests, the winery is still under the same family label and stewardship, now with 4th generation winemaker, John Concannon, at the helm, and still making their signature Cabernet Sauvignon. Their Conservancy Cabernet Sauvignon, grown in vineyards that are a part of a land trust that protects it from development beyond that of vineyards, is an excellent example of what Concannon has focused on since its 1883 inception, create an approachable, varietally correct wine with good flavor and pairing ability. The Cabernet Sauvignon grapes that make up this wine are Concannon Cabernet clones 7, 8 and 11, developed in the 1970’s by the Concannon family which ended up having a great influence on the California wine industry as plantings of the clones spread across the state, particularly in Napa after phyloxera hit the area. This wine is filled with ripe cherry, toasted vanilla, spice and a touch of mocha. Reiterating the importance of the region, and the influence Livermore wineries have had on the national and international scale, Concannon is also known as the father of Petite Sirah, releasing the first Petite Sirah in America in 1961. 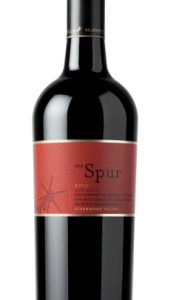 Murrieta’s Well is a sister winery to Livermore’s first winery, Wente, producing powerful reds with character and personality. Their Spur Red blend of Petite Sirah, Petit Verdot, Cabernet Sauvignon, Cabernet Franc and Malbec opens with fresh blackberry and ripe black cherry notes leading to hints of earthy tobacco, dusty leather and wet leaves with spice and chocolate on the finish. An interesting wine that proves how the art of blending can elevate a wine and how wines from this area are indeed special.

Cocobon winery introduced their California Red Blend in 2009, created by winemaker Georgetta Dane, Romanian born who came to America with her husband on a whim and found a home within the winemaking community in California. This Bordeaux style blend delicately marries Bordeaux grapes (Cabernet Sauvignon, Merlot, Petit Verdot, Malbec) into a melange of subtle layers of red raspberry, blueberry, plum and cassis with touches of oak, sweet vanilla and herbal notes.