A historic Texas ranch located in the heart of Tecumseh Creek is set to exchange hands for the first time in multiple generations. Tecumseh Ranch has been owned and operated by the same family since the 1940s and has quite a unique past.

The story goes that in 1856, western settlers set up Camp Cooper on 18,576 acres along the Clear Fork in south-central Throckmorton County with two objectives: to protect settlers and monitor the nearby Comanche Indian population. Camp Cooper became the headquarters for four companies of the famed 2nd U.S. Cavalry under the command of Lt. Col. Robert E. Lee, who served at the camp for about 19 months, though he was often absent, serving in courts-martial at other posts, according to the Texas Almanac. Rumor has it that Lee made one of the rattlesnakes on the land his personal pet at the camp. The camp’s usefulness came to an end by the start of the Civil War, and the post was officially abandoned on Feb. 21, 1861.

The ranch, which is currently up for bid, has been under the same conservation-minded management for more than 20 years and provides a balance of productive native range with adequate cover for thriving populations of various forms of wildlife, including whitetail deer, turkey, feral hogs, quail, raptors, and varmints. The property supports a ranching operation of 300–350 animal units. 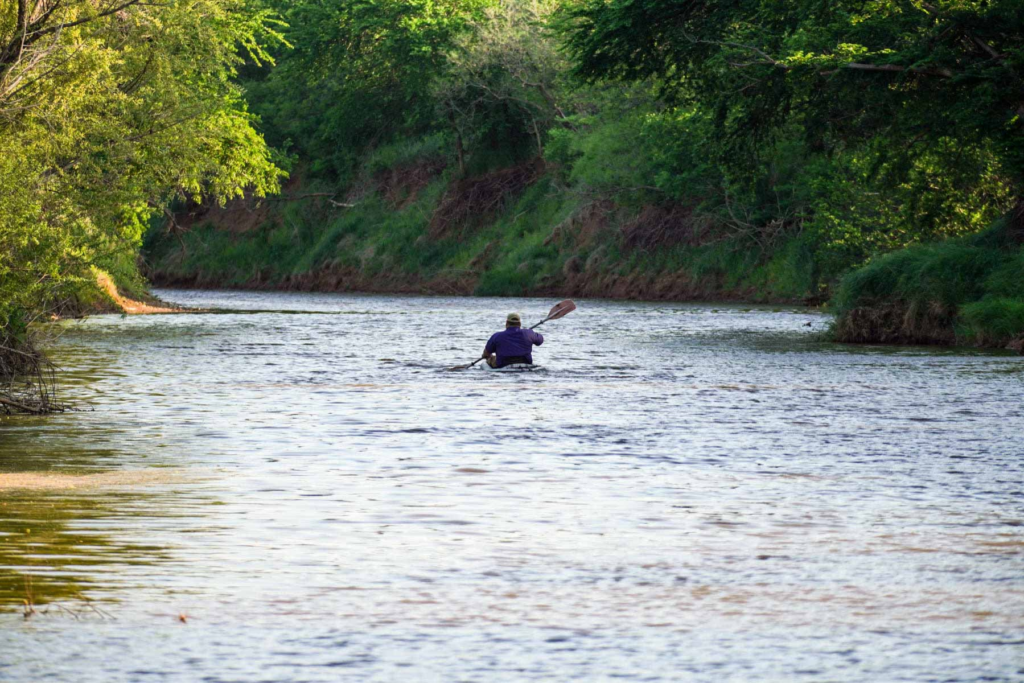 About 125 miles northwest of Fort Worth, the Tecumseh Ranch has more than eight miles of shoreline on the Clear Fork of the Brazos River and almost five miles of the Tecumseh Creek.

“It is one of the most natural, undisturbed, minimal intrusions into the ranch, and for Throckmorton County, the Clear Fork General Corridor, it’s a special piece of property because it hasn’t been disturbed,” says Tyler Jacobs, broker partner director of Hall and Hall, who is marketing the property. “Seldom do quality ranches featuring abundant water, productive capacity, and recreational attributes come to market in this tightly held area of the Texas Big Country.”

Jacobs says the previous tenants have taken the approach of “if you take care of the ranch, it will take care of you.” The family embodied this principle by keeping conservation in mind through minimal input of outside resources and utilizing a system that harvests what the ranch gave them, allowing for a minimal input cost and maximum profit.

Specifically, the property has maintained a conservative amount of cows on the property, allowing the forge base to be taller and water filtration to occur slowly. This leads to improved water quality, and as a result, more comfortable wildlife habitats to foster a beautiful, productive ranch.

The ranch’s location is another selling point. Located in a difficult neighborhood to find properties on the market nowadays, the property had an abundant interest since it even went on the market. There’s not much to not like with the Brazos River running through it and close proximity to Lambshead Ranch.

Improvements on the ranch are minimal and include two good sets of cattle working and shipping pens, a main barn, and a manager’s house.

A specific gem on the ranch is the replica of the original 1800s house John Alexander and Sallie Reynolds resided in. A tornado destroyed the house in the early 1900s, so the family members took it upon themselves in the ‘90s to rebuild the house with the same structure and amenities based on old photos and information on it, restoring that piece of history. The house is a representation of what a wealthy frontier house would look like at the time.

“There’s just so many different components to the ranch,” Jacobs says. “There are hidden canyons; there are fertile river bottoms, there’s Tecumseh Creek itself, which is just phenomenally beautiful. I love seeing healthy cows with fat calves by their side.”

Camp Has Arrived to Save Parents From the Winter Doldrums