GDP growth over the ten years preceding 2020 was surprisingly steady, averaging just over 2 percent per year and rangebound between 1.5 and 3.0 percent.  It’s hard to imagine a better environment for commercial real estate.

Growth never accelerated enough to justify dramatic interest rate increases, and it never receded enough to create any significant concern in the capital markets. Low interest rates plus low volatility is a goldilocks scenario for most investments, but that’s especially true for real estate. 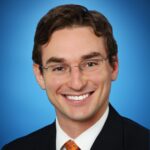 Annual returns in private real estate are highly correlated with GDP growth, and they rarely go negative outside of recessions.  Ironically, one of the most attractive things about real estate as an asset class is how boring it is.  And the ten years that followed the Great Recession were perfect for boring investments.

GDP whipsawed from negative 31 percent to positive 33 percent between Q2 and Q3, ending the year at negative 3.5 percent. That’s more negative even than 2009, when GDP dropped 2.5 percent year over year.  So where is all the distress now?

Investors expect a wave of loan defaults and foreclosures, especially in harder-hit categories like hospitality, retail, and office. Some of the most pessimistic predictions suggest a massive reset of all real estate values and a subsequent restructuring of the grand scale’s underlying debt. The implication is that it’s only a matter of time. Major distress isn’t here yet, they say; wait a little longer for the real opportunities.

We seem to have short memories. In 2010, there was a lot of talk about a double-dip recession. Many were waiting around in expectation for banks and special servicers to start unloading real estate in bulk for pennies on the dollar. There was a massive bid-ask spread between buyers and sellers, primarily because buyers didn’t think prices were low enough yet.

Real estate investors at that time were very cynical about the future; they wanted a discount for the obvious risks, but they were hesitant to take the plunge until the outlook was more certain. As a result, transaction volume was very low in 2010. In fact, it took until 2014 for volume to match that of 2006, which was still 20 percent lower than the peak of 2007.

It’s easy to see in hindsight that 2009-2010 would have been a great time to be snapping up real estate, but it wasn’t so clear at the moment.

Everyone knows that the best time to invest is when prices are low. But that is much easier said than done, especially in private, illiquid asset classes like real estate. In the private markets, it’s tough to determine in real-time the point at which prices have bottomed and when they have peaked.

Rather than trying to time the peaks and troughs, I’ve found it more valuable as a real estate investor to ask this question: “At our anticipated exit, do we think there will be more or less capital flowing into [insert property subsector here]?”

Great real estate investments can be made at any point in a cycle when approached from that angle. But times of uncertainty are particularly appealing because it’s highly likely that more capital will be flowing into all real estate subsectors once the chaos subsides.

So, we find ourselves in 2021, much as we did in 2010. Most likely on the other side of a recession but not out of the woods by any stretch. And many buyers are wondering, “Are prices low enough?  Is more distress coming? How will real estate values react to ballooning central bank debt, to potentially higher inflation, and to the possibility that COVID-19 may never be fully eradicated?”

Like any true Chicago school guy, my take is that prices already reflect those risks. Instead of asking if prices are low enough, investors should be asking, “If not for the current chaos, would this subject property trade for a higher price? And once this crisis fades, will capital flows be in my favor?”

You don’t have to see distress in the form of foreclosures on the courthouse steps to make a good buy. Investing during chaotic times is often a recipe for success simply because the future is likely to be less volatile than the present. And since commercial real estate is a lagging indicator, you see an economic story unfold in the public markets before fundamentals in the property markets catch up.

And, I’m looking for investments that offer a quantifiable discount to market value because of expanded risk premiums and constrained liquidity, such as in the private equity secondary market. Distress is relative. If you think the future will be better than the present, ignoring current opportunities while waiting for the perfect entry point can be very costly.

David Seifert is a partner at Velocis.