Mansfield resident Cory Hughes helped organize the team of dozens last night, which, at one point, included a few members of the City Council. The message is readable from left to right from inside the building, the words outlined in washable, water-based black, green, and red—the colors of the African diaspora.

The scene was bustling, controlled chaos. Clusters of painters darted around foam-rolling paint, wiping up spills, erasing errant strokes. Convoys of EMTs handed out snacks and water bottles, demanding that everybody hydrate. The scene was quiet until “Fuck tha Police” and “This is America” began blasting over a loudspeaker.

“I think that what happened,” says Hughes, “is the same way President Trump hijacked the purpose behind Colin Kaepernick kneeling and made it about the flag—most people that are offended by the word Black, they hijack that and make it about not being inclusive. And so at the end of the day, we do understand that every life that God created matters. But for 401 years now, we’ve had to remind people that Black lives matter as well.”

According to Destanee Smith, another organizer from Dallas, the early onset of rioting and looting “subtracted from the movement” against police brutality, sparked by the death of George Floyd. Smith said the violence that occurred during the first weekend of protests here “had absolutely nothing to do with what we’re fighting for.”

The peaceful process of painting—inviting toddlers, kids, teenagers, and adults alike—is a rebuttal to those false narratives regarding the earlier violence. And the product of this process, the artwork, will hopefully birth healthier narratives as the demonstrations continue. Smith hopes it will remind our elected leaders of all the investments required in Black communities: education, food deserts, limiting pollution. “Those are the kind of conversations that we want to have,” she says. 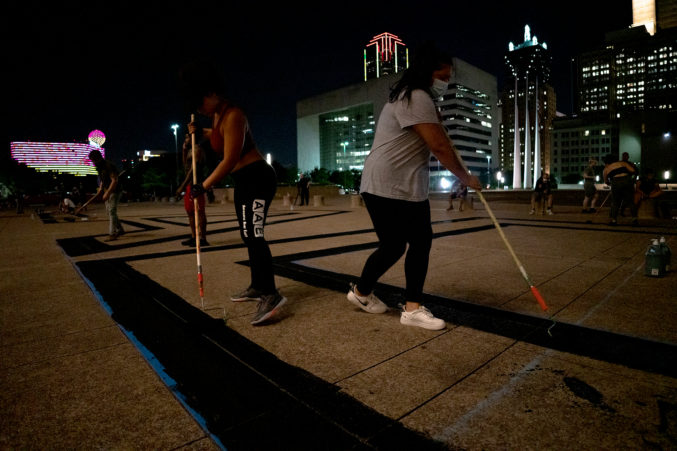 Dozens of volunteers painted “Black Lives Matter” on the plaza in front of City Hall on June 8, 2020. (Photo by Miles Hearne)

“We know that there’s always a conversation after the art,” Smith says. “We need to make sure that people understand that a large reason why you see the reaction to Black Lives Matter is because people saw George Floyd. It stoked something human in you to say, ‘That’s not right.’ But we want to make sure you understand there are a lot of other things that are blatantly not right. Like, systemic racism. Like, defunding [certain] departments [and then] feed[ing] that money back into a police department that’s brutalizing Black bodies.”

Smith said an anonymous donor expressed interest in somehow contributing to the cause. From there, the artists decided on City Hall: our elected leaders need to remember that Black lives matter. They would paint the words there.

“When you’re sitting at your desk, and you’re contemplating that legislation that you haven’t passed, look outside your office—for as long as Dallas allows there to be no rain—and remember that Black lives matter,” Smith says.

Rain water will wash away the water-based message. The artist, JD Moore, told NBC 5 that “by [the artwork] being temporary, the idea is to reflect that I don’t want to go into the future needing to proclaim that Black lives matter.” Central Track reported that washable paints were employed to avoid the image of somebody scrubbing away—erasing—the phrase “Black lives matter.”

At the end of May, Smith cofounded a Facebook group called Change DFW Protests 2020, which provides protestors with times, dates, and locations of Dallas-area demonstrations. It includes information for legal resources and ways to access bail funds. They were able to use that group to find volunteers for last night’s art project.

“We’re not going to stop this fight—this’ll wash away,” Smith shrugs, gesturing toward the artwork. “This is not about the paint, though. We know that this is not about the paint. This is an opportunity for—we saw families out here, we saw kids out here—and it’s important for people to be able to be involved… So you can see that fighting for Black lives is something that everybody can be a part of—and should be a part of.”

In 1957, Albert Camus delivered a speech that he titled “Create Dangerously.” Communism, capitalism, and fascism were battling for hegemony in western Europe. Camus said, “Today everything is changed and even silence has dangerous implications… To create today is to create dangerously. Any publication is an act, and that act exposes one to the passions of an age that forgives nothing.” Sixty-three years later, little has changed. Police brutality continues. We’ve watched officers kill Black people. To the artists, not choosing sides is not an option. And so until the rain falls, Smith hopes that City Council members will see their painted message. She hopes that they see it saying, “We see you.”

And then they have to pick a side.