Jose Davila’s installations are the kind of art that makes me think, I could do that myself, except I couldn’t. His sculptures require the quarrying of large, moss-covered boulders and the procurement and transportation of construction-grade I-beams. At minimum, I’d need myself plus a few machines. Then there’s the fact that Davila’s work depicts and discusses the fundamental violence, irony, and contradiction of our time. There’s more to the artist’s minimal compositions than what meets the eye.

In fact, the work of Jose Dávila is “a metaphor for the constant struggle of opposing forces.” His “erratic freestanding structures defy the formal order and repetition commonly associated with modernity and minimalism.” At least, so claims the brochure for his solo exhibition Directional Energies, on view at Dallas Contemporary through March 15. The claims hold water.

Take, for example, Untitled—a sculpture comprised of an I-beam bolted, at one end, to the floor and hanging from a wire slung over a ceiling beam and anchored to a large boulder on the floor. The tension between beam and boulder begs the question: Is the dangling beam struggling to uproot the boulder? Or is the boulder struggling to yank back the beam? Science would tell us that the suspended beam has a potential gravitational energy of gmh and is therefore pulling on the boulder, which has only inertia and is therefore at rest. But the eye and the imagination are not so sure. It’s the primeval struggle of knowledge and belief. 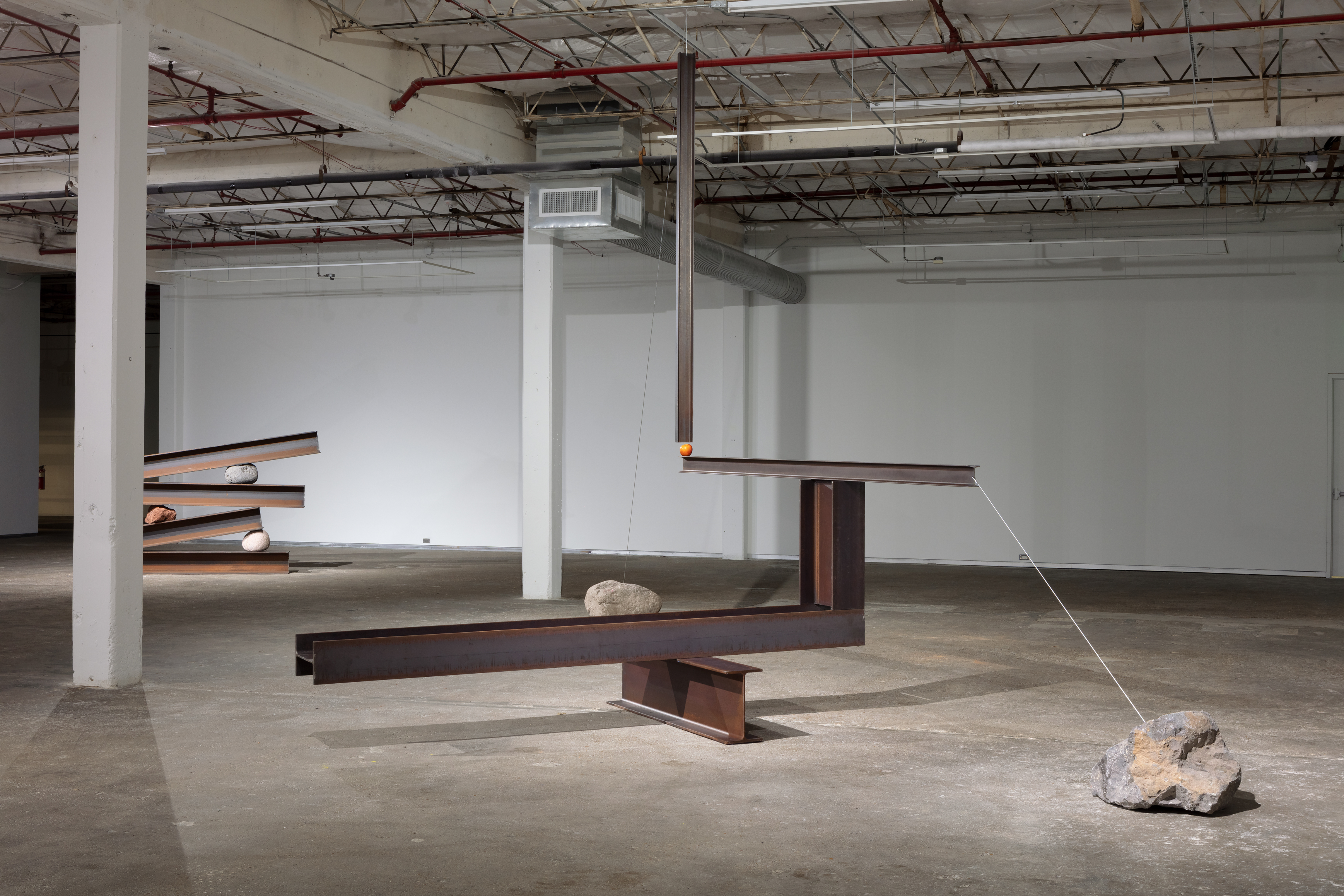 Directional Energies includes four iterations of Untitled. The repeated theme of boulder versus beam, also found in the sculpture Newton’s Fault, suggests the struggle between capitalism and climate. The squat boulders, covered in lichen and moss, recall the natural. The brightly painted beams recall the unnatural. This leaves the strained and skinny wire to ruefully intimate some sort of tenuous balance between the two, between industry and earth.

Of course, the irony is that the boulders aren’t natural anymore. Human touch plucked the rock from its habitat, human gaze dragged the boulders into a human sphere of reference. This is Dávila’s first implication of the violence of human perception. His second implication is slightly more damning. For by incorporating volume in his sculptures, Dávila forces the viewer to decide where the sculpture ends and the gallery begins. The viewer must cut and rip the piece’s volume out of the gallery’s contiguous volume and space. As artist Wu Tsang and poet Fred Moten wrote, “there is no non-violent way to look at some-body.” Or some-thing.

Dávila’s sculpture isn’t limited to climate versus capitalism, earth versus industry. It’s not limited to science versus religion. It’s about the violence of human perception versus the elusiveness of the perceived. And that’s where Dávila defies Modernism, a movement which crowns humankind the master of nature. Dávila questions human violence, both its validity and its veracity. He illustrates the human-universe struggle as an eternal draw, balanced between the force of a wire and the weight of a single, forsaken apple.

Buy One, Get One Free Nail Polish from Misa