You know the timeless story: In a castle shrouded in vines deep in a forest, a brave prince finds a princess who has been cursed to sleep for a hundred years, but he breaks the spell with a kiss. It’s a tale that has been told, and retold for generations. Texas Ballet Theater brings the crowd-pleasing The Sleeping Beauty to the Winspear Opera House this weekend. For non-balletomanes, this ballet might seem a little different than what you are used to. But don’t be mistaken, this work predates its Disney counterpart by nearly a hundred years.

With its instantly recognizable score and ubiquitous story line, The Sleeping Beauty is a treat for dance lovers and novices alike. Texas Ballet Theater’s version is set to the Tchaikovsky score, performed live by the Dallas Opera Orchestra. TBT’s Artistic Director, Ben Stevenson, O.B.E., choreographs the ballet after the standard Petipa choreography. Its deliciously opulent sets and costumes, sent from the Boston Ballet and designed by David Walker, turn the stage into a spectacle. Stevenson is a master of the art form, and his clever choreography and precise direction transport this classic into the 21st century.

The ballet is split into a prologue and three acts with three intermissions. The prologue sets the stage for the rest of the ballet. The court gathers in the palace to celebrate the christening of Princess Aurora. Six visiting fairies arrive to bestow gifts on the princess, such as the fairy of generosity or the fairy of charm. In this way, the ballet allows dancers to show off, with many more solos than most ballets. Stevenson’s eye for detail is key here, as each fairy’s variation is stylized to reflect the gifts she offers. The Fairy Beauty’s movements are dripping with grace, while Fairy Song moves stunningly fast to a flute that trills like a canary. The Lilac Fairy is the most powerful of all the fairies—for Disney lovers, just imagine that she embodies the powers of Flora, Fauna, and Merryweather all rolled into one—and she is the last to present her gift. Before she is able, the party is interrupted by Carabosse, a dark fairy who is furious that she was not invited. 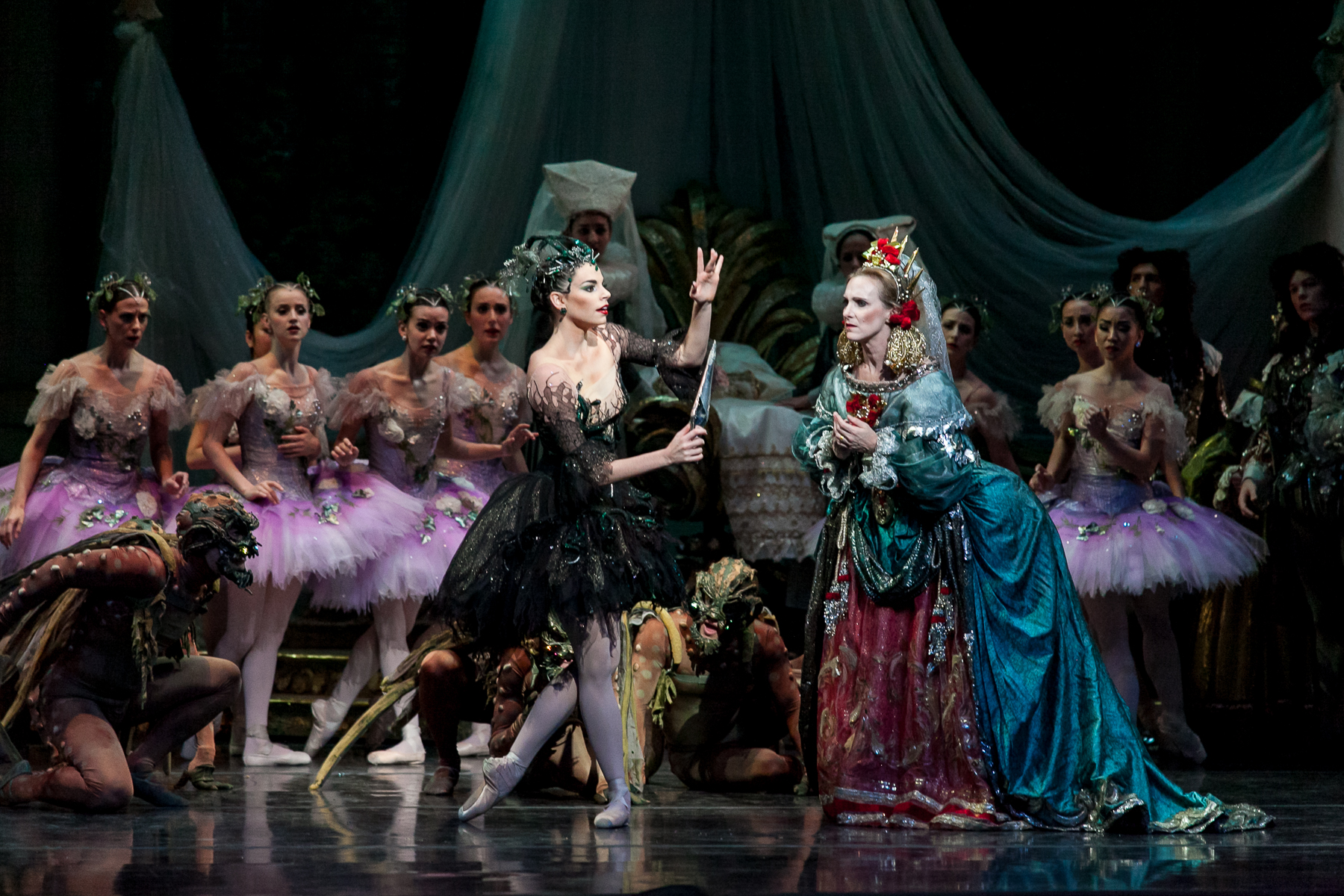 Carabosse is the dynamic force of the ballet. In many other versions of this ballet, her character is underutilized, portrayed strictly through pantomime without any dancing or pointe shoes. Stevenson’s version adds meat to the character for a manner so powerfully evil that it is almost delightful. She arrives on a carriage pulled by monsters and makes a point to humiliate the attendant in charge of the guest list, literally snatching his wig. As she dances, you get the sense that she is thrilled to make a scene. She wants to ruin the evening, which she does by casting a spell so that Aurora will die on her sixteenth birthday. The ever-so-regal Lilac Fairy intervenes, using her intended gift to save the princess, who will instead fall into a deep sleep.

Act One opens on a breathtaking scene in the palace garden, complete with gorgeous columns and greenery, as the kingdom gathers to celebrate the princess’ birthday. The scene opens with the famous “Garland Waltz,” with the corps de ballet bearing large flower wreaths as they move in interlocking patterns. Jack Lawrence and Sammy Fain, the composer’s behind Disney’s The Sleeping Beauty, used this melody as the base for the song “Once Upon a Dream.” Four foreign princes, resplendent in their finery, await Aurora’s arrival.

Aurora’s entrance is one of the trickiest and speediest variations in classical ballet. The choreography requires precise footwork and a delicate lightness. She bubbles over with excitement, shyly glancing at the awaiting princes. The king informs her that she is to marry one of these gentlemen, and each get their chance to court her in the “Rose Adagio.” Aurora greets each suitor, and they all present her with roses. Deceivingly difficult, this section is iconic in ballet, where Aurora balances on one foot en pointe with the other leg extended behind her, letting go of her partner’s hand for a brief moment to balance by herself in a stunning attitude. Balletomanes expect this moment, waiting for her solo balance with bated breath, and novices will be amazed at her ability to hover as if suspended. It is one of the most challenging sections of partnering for ballerinas, and one of the most exquisite. 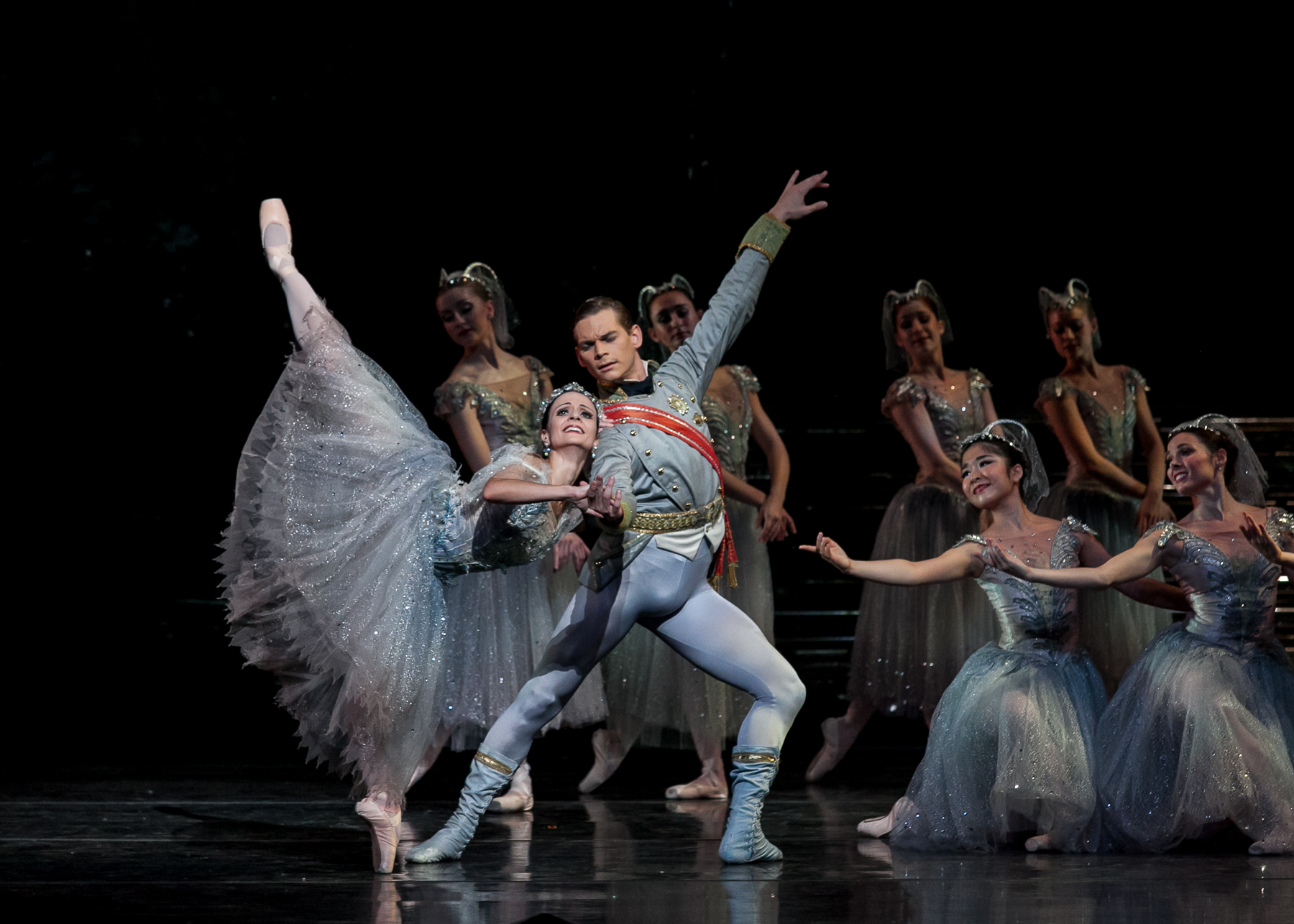 An elderly crone, obscured by a cloak, presents Aurora with a bouquet of flowers, which, of course, conceals a spindle. She pricks her finger and begins to succumb. Stevenson makes expert use of this section; even as Aurora is fading away, she displays her gentle spirit by assuring her parents that she is fine. Carabosse gleefully reveals herself as the crone, not swayed by the anger of the crowd. The villagers envelop her with shaking fists; one moment she is towering over the crowd, then, suddenly, she is gone.

Will Aurora ever awake from her slumber? You know the story. Act Two introduces us to our prince for the first time, called Prince Florimund. One hundred years later, while in the forest with his hunting party, the prince sinks into contemplation. The Lilac Fairy appears to him, ushering in a vision of the princess. The pair dance with palpable longing, with Florimund dreaming of love, and Aurora hoping he might lift the curse. She darts in and out of a flock of beautiful nymphs, beckoning Florimund closer to her castle. A furious Carabosse attempts to hamper the prince, but she is easily defeated, and his kiss awakens the princess from her slumber.

The final act is the icing on the cake, essentially the reception for the Aurora-Florimund wedding. The joyful pair is joined by a gaggle of fairytale characters, like the Bluebird and Princess Florise, who he is teaching to fly. Little ones will be delighted by Puss and Boots and his girlfriend, the White Cat, who toy and paw at each other, even as they dance. The pas de deux between the Prince and Aurora is overwhelmingly romantic; she throws herself with wild abandon into his arms and he catches her in a fish dive every time. 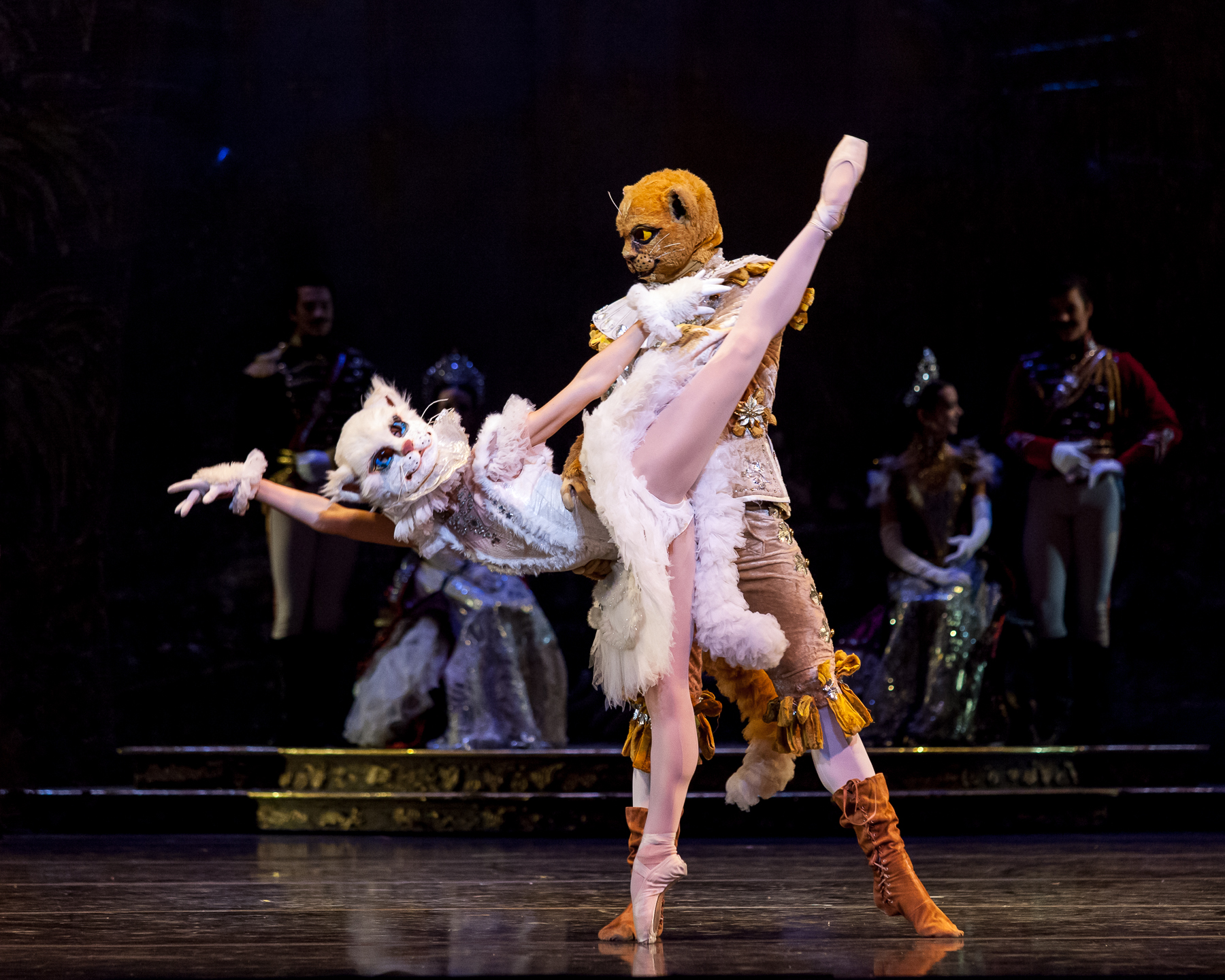 Stevenson demands a lot from his dancers, and there is no exception in this maddeningly difficult ballet. Texas Ballet Theater is filled with an array of diverse body types—the Bluebird is about a foot taller than his partner even when she is en pointe, for instance—but the corps de ballet is uniform and precise, with not a finger out of place.

Viewers will be awash in the lavish sets and costumes. Watch for repeating motifs in the choreography—Stevenson’s interpretation especially heightens the character development. The choreographer lets his dancers really dance, showing the story through movements that are easy to understand, rather than camouflaging it in layers of pantomime. You don’t have to be a ballet lover to be swept away by this performance.

Texas Ballet Theater presents The Sleeping Beauty in Dallas at Winspear Opera House from September 6-8, and in Fort Worth at Bass Performance Hall from October 18-20. Find tickets here.